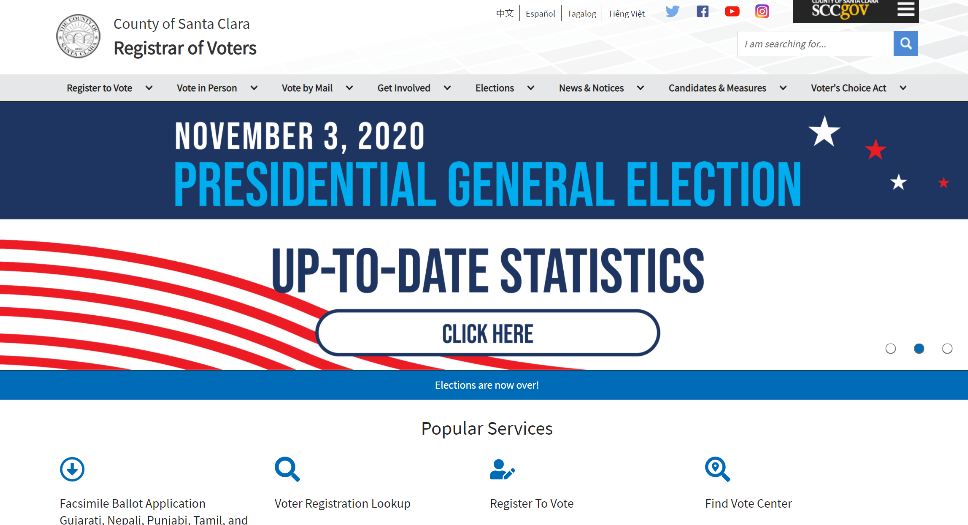 POLLS ARE NOW CLOSED IN THE NOVEMBER 3 PRESIDENTIAL GENERAL ELECTION

POLLS ARE NOW CLOSED IN THE NOVEMBER 3 PRESIDENTIAL GENERAL ELECTION

Results from Early Vote by Mail Ballots Available Online; Website Will be Updated as Results are Tabulated
SANTA CLARA COUNTY, CALIF. – Polls are now closed across California for the November 3, 2020 Presidential General Election. Vote Centers in Santa Clara County will accommodate voters who are on-site and were in line to vote by 8 p.m.; lines are now capped and no additional persons will be allowed to enter.

When polls closed at 8 p.m. 446,935 ballots were tallied, which included Vote by Mail and drop-box ballots that arrived before Election Day. The initial results have been posted on our website at sccvote.org. They will be updated hourly through the night as results from our Vote Centers arrive and are added to the tally.

After Vote Center ballot tallying is completed, the Registrar of Voters’ Office will continue to process Vote by Mail ballots that were received by November 3, until all such ballots have been counted. All Vote by Mail ballots postmarked on or before Election Day and received within 17 days after the election will be processed and tallied as they come in.

The Registrar of Voters’ Office will post updated results on its website at Election Results and on its Twitter, Instagram, and Facebook pages twice daily, at 10 a.m. and at 5 p.m. throughout the week. After the week of the election, results will be updated daily at 5 p.m. Included in the daily updates are ballots such as provisional and damaged or unreadable ballots.

The County of Santa Clara Registrar of Voters would like to thank all the residents of Santa Clara County who participated in this year’s unprecedented, record-breaking election.

“For those who registered to vote for this election, you are what pushed us over the one million marks for voter registration in Santa Clara County, and that’s a record,” said Registrar of Voters Shannon Bushey. “And for everyone who took some time for democracy to cast a ballot, either early by mail or in-person at one of our Vote Centers – your voice will be heard.”

“The early returns were staggering,” said Bushey. “We told people that the best way to vote during a pandemic was by mail, and many heeded that call. We offered nearly 100 Vote Centers where people could go cast a ballot in a safe and socially distanced environment, and we’re pleased to see so many voters show up and follow all the guidelines, making for a smooth election. I believe that once all ballots are counted, we will see a record number of ballots cast in Santa Clara County.”

Media outlets that want to capture footage of the ballot-counting process at the Registrar of Voters’ Office should contact the ROV Media line at 1-408-282-3008.

Education for the Future–the Mission of Harmony Plus Inc.

COVID-19 will not define my generation., what I do in response will

Winners of ” I Love My Community” Youth Video News Competition