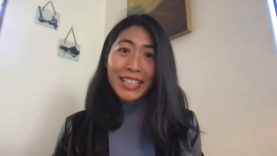 Mattie’s professional life is devoted to creating film and television productions. Her community spirit supporting the South and San Benito Counties’ art scene has had an impact on both Counties.  She became Director of PJIFF in 2018 and grew the festival to an 8-day regional festival including Morgan Hill, San Martin, Gilroy, Hollister and San Juan Bautista for 2020 which was unfortunately cancel due to the pandemic.   Since then Mattie has pivoted the festival to a 14 day virtual festival.  With 175 films from 35 countries, panel discussions, celebrity appearances, and partnerships with SMoCA (Scottsdale Museum of Contemporary Art in Arizona), the California Institute who presents the Mill Valley Film Festival and a special panel discussion with Perseverance Moon Landing Engineer Jerry Martinez from NASA Jet Propulsion Lab and the first Woman Chair of the Visusal Effects Society in their history Lisa Cooke, PJIFF is constantly building on their success and creating a regional film festival that everyone is talking about.

Shanshan is the Chair of China Day for PJIFF. She has been working with Chinese independent filmmakers and producers for several years now to help them break into international markets beyond the borders of China. Simultaneously, she has helped foreign filmmakers gain entree into the Chinese film market. Having spent years managing the film distribution process, ensuring that all digital assets are prepared properly and successfully submitted for official release, Shanshan has gained a deep appreciation for the craftsmanship of a filmmaker who is able to tell an intricate, personal tale within the constraints of an often limited production budget. She is honored to work on each new film project, and enjoys helping filmmakers gain exposure to international audiences.

PJIFF is a mission-driven all-volunteer non-profit, focusing on diverse, inclusive, and women empowering films, including 7 educational programs that encourages, engages and educates people of all ages so they can find their voice through film.

Get ready to enjoy four days of film screenings, speaker panels, mixers, and community events in the historic downtown districts of Morgan Hill and Gilroy, California. Our two cities are known for their vibrant arts scene, award-winning wineries and restaurants, and welcoming small town vibe.

The Poppy Jasper International Film Festival is an annual event produced by volunteers as part of Poppy Jasper, Inc., a 501(c)(3) nonprofit organization. If you believe in the essential nature of independent films, please consider supporting our work.