Highlights from Leadership Retreat on Nov. 17. 2019 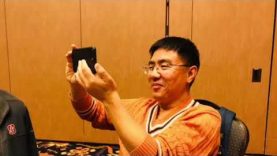 This event was planned to build on the momentum of the 2019 NCLF (September 15 – 18, 2019) in DC at which over 70 different AAPI organizations representing more than 10 ethnic groups signed a joint statement calling for full-scale civic engagement which promised to include volunteerism, donation, social advocacy, community service, voter registration and political participation at the local, state, and national levels.

This was indeed a gathering of “Crouching Tiger and Hidden Dragon” and a large part of Saturday was spent getting to know each other and the organizations they represent. Christine Chen of AAPIVote gave an introduction of the 2020 AAPI Presidential Town Hall; SK Lo, an introduction of AAUC and its missions; Xiaoyan Zhang, Civic Engagement Data Infrastructure; and Diana Ding, Mainstream Media Engagement.

After a solid five hours of work, we were treated by CLUSA to dinner at Ferraro’s Italian Restaurant where we made a wise decision to eat family style. An endless parade of delicious appetizers (6), pasta (5), main course (4) and desserts (3) soon appeared before us, served with typical Italian flair. Sandy Chau introduced us to a vintage Chianti the name of which I have unfortunately forgotten.

After dinner, we ubered to the Mirage for the Cirque du Soleil ‘Beatles Love’ show which matched the usual high standard production by this circus/entertainment company. It was an amazing variety show of dazzling acrobatic stunts, crazy costumes, accompanied by rock/popular music made famous by the Fab-Four. Their music, universally appreciated and relevant, was enjoyed by the diverse AAPI Leaders in attendance.

Back to the grindstone on Sunday. After a brief but intense struggle with the purpose and deliverable for the 2020 Presidential Town Hall and NCLF, with clear guidance from Sandy Chau, the Leaders reached a consensus. Details of the action items will be covered by facilitator Anthony Le, but the retreat attendees are urged to mobilize their personal and professional contacts and work hard to generate interest to entice as many AAPI leaders as possible to attend the 2020 event. Because of the short lead time, a solid agenda, specific action plans, and deliverables must be developed ASAP.

The event was disbanded at Sandy’s house after another feast of BBQ chicken and ribs. We thank Sandy’s devotion and his philanthropic efforts to advance the cause of AAPI. We also thank the CLUSA staff in facilitating this conference. Jasmine’s mastery of airline, hotel reservation is very much appreciated and her ability to summon Uber transportation is nothing short of “supernatural”.