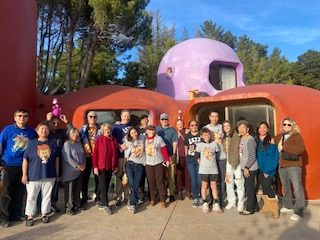 HAPPY GATHERING FOR GOOD CAUSE

Have you ever traveled up 280 freeway coming from Silicon Valley going northward and noticed a very colorful hillside garden when passing over Crystal Springs reservoir bridge ?  You might even have wondered if you’d gone into a time machine and was now in a field of dinosaurs of thousands of years ago. 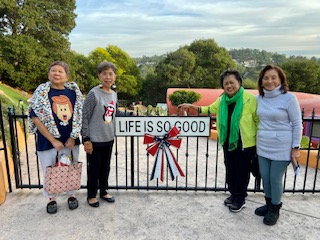 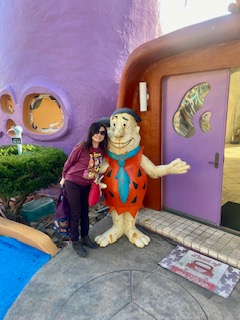 Special greeting at entrance gate gives a hint of the happy experience one will have at Flintstone House, seen by Ingrid Lai, Brenda Wong, Gerrye Wong, Rose Lianides and Liz Chew

Don’t worry – your eyes hadn’t failed you for this is the backyard garden of the iconic Flintstone House which has been attracting drivers since it was built in 1976. For 46 years, the house has been an attraction to the freeway drivers going northward on 280 freeway mainly for the circular odd shape of the house.  Designed by architect William Nicholson and built in 1976, it was one of several experimental domed buildings using new materials by spraying concrete onto steel rebar and wire mesh frames over inflated aeronautical balloons.

Originally painted white, all of the interior surfaces are rounded and the master bathroom has a floor of rocks instead of the traditional tile. Constructed of approximately 2700 sq. ft. of living space, the home had three bedrooms, one only accessed via a spiral staircase inspired by an ice cream cone that at the top is the same diameter as the room.

The house always drew attention because of its  different exterior shape. But it literally caught everyone’s eyes when, in 2000, the house was repainted deep orange and one of the domes was later painted bright purple. 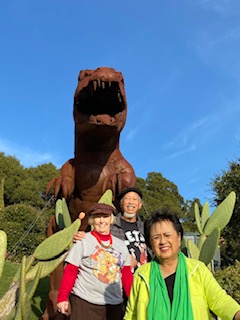 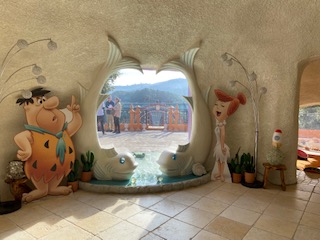 Eleanor and David Yick celebrate his birthday by touring the dinosaur landscape and interesting interior rooms.

Eleanor Yick said the sight of the house always intrigued her when the family would take rides to San Francisco, so when the  CHINESE HISTORICAL AND CULTURAL PROJECT offered an open house visit as a live auction prize at its 35th Anniversary fundraising gala in September , she knew she wanted to be the winner.  It was a hard fought bidding war, as Auctioneer Franco Finn recalls, between two women who wanted to celebrate their husband’s big birthdays at the home, but the determined Los Gatos native Eleanor Yick won the prize to achieve her dream.

Actually, her bidding win all went to a good cause for her husband is the President of the Chinese Historical and Cultural Project, so what better person to be the top bidder than the Yick family.  Dave Yick’s birthday  came and went uneventfully on October 30, but  on November 27, the celebration began at the house, popularly  known as the Flintstone House from  a cartoon series, “The Flintstones”,  a Hanna Barbera Production popular in the 1960s about a Stone Age family. Somehow people envisioned its odd shape as something  creatures of the Stone Age might be living in, as comical character Freddy Flintstone in the cartoon world. 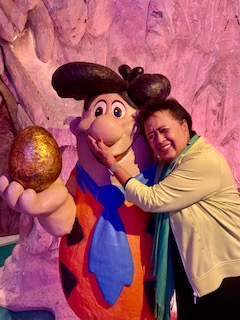 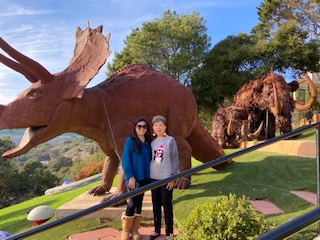 Loveable Flintstone characters greeted all the guests and Brenda and Magen Wong liked meandering visiting the wooly mammoth and dinosaurs.

The Yick Family followed the next 40 year Flintstone House path, and saw it fall into disrepair in the mid-1980s as water runoff from the upper mountainside damaged the foundation, causing walls to crack. Through years of many owners who made attempts to seal the cracks and restore the building, it has finally emerged to its now glorious appearance  in 2017 due to the imagination of present owner, Florence Fang.She says she always envisioned the house to be one to bring happiness to all who viewed it, and she made it her goal to make it a place of imagination and whimsy. She obviously has succeeded because most people who see it when they drive the freeway, are not only surprised at the sight of dinosaurs, giraffe, and Fred Flintstone in the hillside backyard facing the freeway, many find it enchanting and can’t help but smile at the sight.As Dave Yick said as he greeted 20 family and friends last week, what more imaginative place could one bring one’s family to celebrate a happy day than this Flintstone House which exudes clever, cheerful and smiling animals and Freddie and Wilma Flintstone figures throughout the interior of the house. His daughter Julie Yick-Koppel and husband David agreed this was truly a special occasion at an extra special location and was echoed by Dave’s sister Judy Quist. 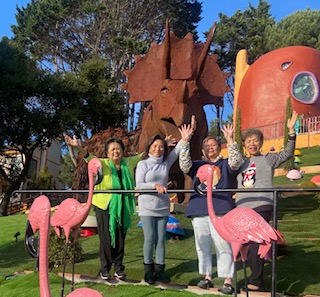 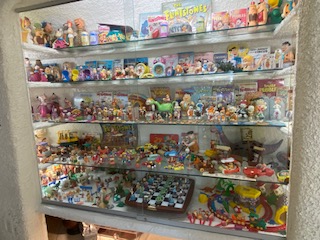 CHCP members tour the Flamingo garden     and  view the hundreds of Flintstone figures in  a unique window display in the house.

It seems all of the Yick guests were delighted to be walking among large oxidized steel sculptures of dinosaurs, a woolly mammoth, a garden of flamingos and even the infamous Tin Man from the Wizard of Ox movie, especially son Brian and his wife Robin Laws, together with their children Violet and Benjamin. But  some  less enchanted neighbors, in March 2019, led the town of Hillsborough to file a complaint alleging that these animal modifications are not in keeping with the town’s usual conservative nature and that Mrs. Fang  did not receive proper permits allowing her to landscape her backyard with, in their minds ludicrous comical characters. With the law offices of former San Francisco Mayor Joseph Alioto and Angela Alioto representing owner Fang’s rebuttal, the lawsuit was settled in June 2021, allowing for her modifications to stay and with Ms. Fang receiving $125,00 from the city of Hillsborough, no less.  She used the funds, I assume, to acquire at least thousands more figures spread throughout the property because wherever you look, there is some unique figure staring back at you. 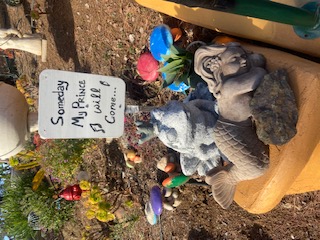 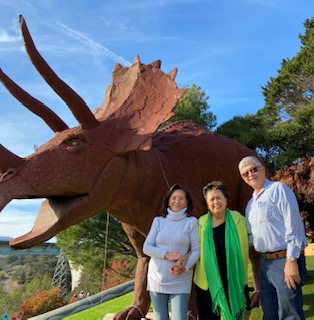 Through the generosity of the Fang family Foundation in support of non profit causes, in 2019  I  held  a fundraising afternoon tour for 10 delighted guests who donated generously to the Angel Island Immigration Station Foundation for the visit. Continuing Mrs. Fang’s support of community causes, she generously allowed the Chinese Historical and Cultural Project this year  to  put up the tour as a live auction item with winning bid funds to go towards the group’s Chinese American Historical Museum projects in Santa Clara Valley. 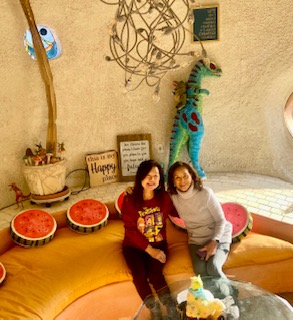 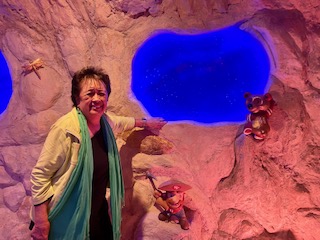 Live Auction Co Chairs Arthur Low and Rose Lianides, along with CHCP Board members Chris and Bau-Chin Jochim, Liz Chew and Gerrye Wong, presented a delicious dim sum lunch experience on the spacious Flintstone House  patio for the Yick celebration guests as well as the traditional Chinese  fruit and whipped cream filled birthday cake. The competing bidder, Ingrid Lai, was an invited guest along with husband Bill Shu, because Eleanor, the victorious, wanted Ingrid to still enjoy the ambiance of this enchanting live auction prize with them. 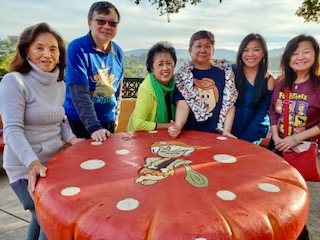 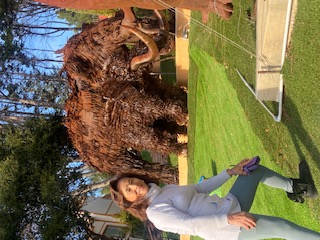 So the guests were especially happy to have not only the special treat to view this unique building, but having the knowledge that they were a part of the Yick Family’s support of this cause for Chinese American history.  Where else could the children and grandchildren honor their patriarch in such a happy atmosphere, surrounded by comical characters of all shapes and sizes with the entry gate saying “Life is So Good”! Everywhere one turned within the house, you were greeted with smiling figures.  Where else would you find a room  with a floor that seemed to be a simulated lake, where one could feel like walking  on water? Encompassing the room were dirt like walls  with figures of gold miners alongside, in honor of those Chinese peasant pioneers who had worked in the gold fields during the Gold Rush era, as well as  contributing to  America’s history by laboring to build the nation’s Transcontinental Railroad, the back breaking dangerous task of which no other laborers living in America at that time were willing to work on. 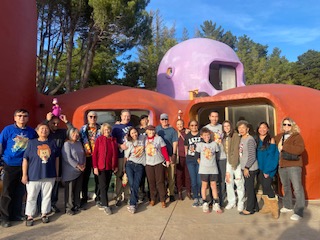 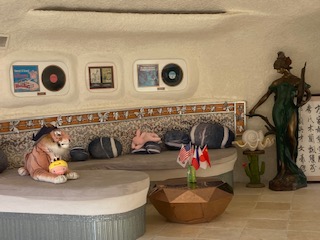 The Yick Family birthday celebration gathered in the spacious patio of the Flint stone house.  The entry of the room has animals greeting you in every corner

Flintstone House is truly the product of Florence Fang’s imagination and creative spirit to make this a happy place. Every item, one could tell, was hand picked to fit into this place of humor and happiness.  It indeed brought many happy smiles as the Yick Family guests toured inside and outside where they were greeted by a giant rainbow archway,  the red truck driven by Freddie himself, a smiling tiger above the front door welcoming guests in the 2022 Year of the Tiger, and of course, dear old happy-go-lucky Freddie Flintstone extending a welcoming hand at the front doorway entrance.  Even good luck Xian terra cotta soldiers lined the streetside wall wishing everyone good fortune to all.   A very remarkable experience  for a happy family  and grateful organization from a philanthropic owner/donor.

A belated CONGRATULATIONS TO THE Contemporary Asian theater Scene (CATS) which presented a very successful well attended film festival in October. I was pleased to be in attendance when Flo Oy “Wong received the Image Hero Award for individuals who have exemplified the highest achievement in the arts. Was happy to meet filmmaker Crystal Kwok who had told me earlier in the year about her documentary  BLURRING THE COLOR LINE which told of lives of Chinese immigrants, like her grandmother, in Georgia, during the 1930s, and the discrimination they faced, not fitting into either the white or black societies. 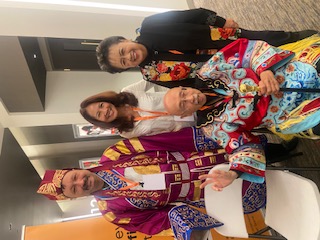 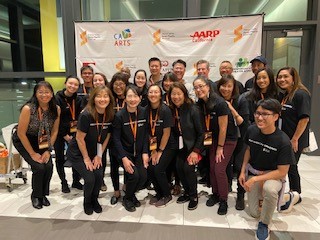 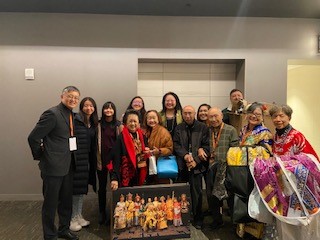 The closing film, THE SIX, was the extraordinary story of the survival and dignity of 6 Chinese passengers aboard the Titanic, who landed in New York only to face racism that disallowed them entrance into the United States during this time of the Exclusion Act against Chinese.   My hope is that these very worthwhile films, documenting years of research on interesting topics, will be available for all of you to view  someday somehow. 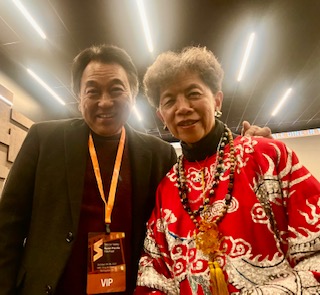 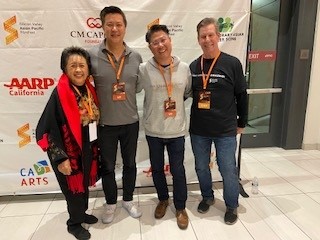 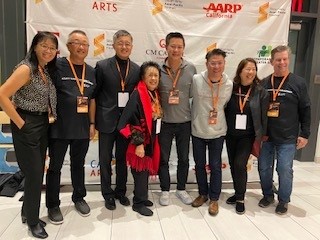