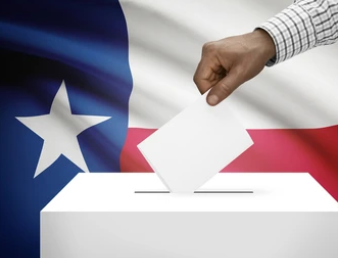 On Nov. 17, the Southern Coalition for Social Justice (SCSJ) hosted a press conference to discuss the new case.

“This makes Texas one of the most diverse states in the country. But you would not know that by looking at the maps, which purposely crack communities of color throughout the state.”

“Our lawsuit is complementary and consistent with those already filed over the last couple of weeks, because we’re not only highlighting coalition districts, we’re also uplifting the role of the API community in these coalitions,” she said.

Taj and other speakers offered examples of how Asian American and Pacific Islander population centers in Texas’s Fort Bend, Collin, Harris, and Tarrant counties were “cracked” in the new maps.

“These egregious, egregious lines,” said Jerry Vattamala, of the Asian American Legal Defense and Education Fund, “go directly through the most concentrated part (of the Asian population), take a small piece and put them with a white population to essentially dilute their vote.”

“Across the state,” he said, where people “have worked so hard for so long to build these communities to have a voice, these lines are essentially silencing them.”

“It’s really hard to come to any other conclusion than that this was intentional racial discrimination.”

That population growth in the past 10 years documented in the 2020 Census enabled Texas to gain a new level of national power.

In the census data-driven reapportionment process that precedes redistricting, Texas’s Congressional delegation grows by two seats, to 38 members, while seven other states, including New York and California each lost a seat.

This year marks the first redistricting process without oversight from the federal Justice Department. Prior to the Supreme Court’s 2013 Shelby County (AL) vs. Holder decision, states with a history of racially discriminatory voting laws had to clear new voting rules with Justice before they could take effect.

Texas’s redistricting process, the suit says, lacked transparency and produced maps intended to dilute the power of communities of color, and Black, Latino, and Asian American and Pacific Islander voters.

“In every decade since the passage of the Voting Rights Act, in 1965 the federal court has intervened to deny Texas’ unlawful racial gerrymandering,” said ACLU attorney David Donatti, who introduced himself as a native of Fort Bend County, “one of the areas we’re suing about.”

“The state has used some new tools, some old tools, but the discriminatory design is precisely the same.”

“As a member of one of the fastest-growing ethnic minorities, I had an expectation of more representation from our legislators,” one of the plaintiffs, Amatullah Contractor, said.

The redistricting committee, another plaintiff, Deborah Chen, a community activist and member of OCA-Asian Pacific American Advocates, said, was “just going through the motions as our rights were literally being taken away.”

“In the middle of COVID,” she recalled, “people had to come from across the state to Austin. People flew in from El Paso and had to wait the entire day to speak for their one minute of time.”

“This is taxpayer money, is what it comes down to. It’s not even just about power. Redistricting decides who gets to make those policy decisions on how our taxpayer funds are allocated and spent.”

“Are they actually being invested in our neighborhoods in our schools, in our hospitals? Who is going to know better than the people who live there?”

SCSJ brought the case, along with the ACLU of Texas and AALDEF, on behalf of more than a dozen other organizations and individuals, including the North Texas Chapter of the Asian Pacific Islander American Public Affairs Association, Emgage Texas, OCA-Greater Houston, and the Fair Maps Texas Action Committee.

It will be heard initially in the U.S. District Court for the Western District of Texas, Austin Division, although it is likely to eventually be combined with the other cases challenging the new Texas maps, Donatti and Taj said.