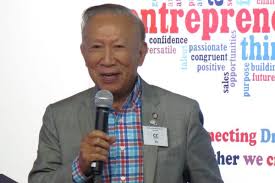 Contribution (s):
C.C. Yin is a Chinese American entrepreneur and owner of 26 McDonalds restaurants in Northern California. He is also active in supporting the Asian Pacific American and Chinese American communities. Success for him didn’t come in a day, but when it did, he decided to share it with those around him.
C.C. Yin was born in 1937 on a farm in Chengdu, China. Despite losing his mother at an early age and growing up in an impoverished family, Yin had a happy childhood. Many things changed though when he was 12. With the Chinese Civil War spreading, C.C. Yin and his family were forced to move to Taiwan along with his family following the defeat
of the Chinese Nationalists by the communists.
In Taiwan, Yin entered one of the top public universities in Taiwan, Cheng Kung University, and obtained his B.S. in Civil Engineering. Yet the times were harsh, and Yin was faced with the difficulty of securing a job. He decided to pursue his future in a foreign land. In 1964, Yin, already 28 years old, immigrated to the United States with less than $100 in his pockets and faced the challenge of an unknown culture and language. Yin spoke little English, and realized that his bachelor’s degree was insufficient for an American career. Despite the language handicap, Yin pursued a masters degree in civil engineering from the University of Washington. It was here that Yin met his wife, Regina, who was also an immigrant from Taiwan. In 1966, the couple were married and moved to the San Francisco Bay Area where Yin began his career as a civil engineer.

Some videos of CC Yin on Ding Ding TV:

2
His troubled upbringing and immigration experience added to Yin’s resilience and his determination to succeed. As a successful engineer, Yin worked for various corporations including Fluor and Bechtel Corporations and the Austin Company. During his own free time he accepted contracts to renovate old houses and resell them. The Yin’s became
millionaires. After the company that he’d worked for for 13 years decided to move out of state, Yin, then 48 years old, was faced with an agonizing decision: get laid off and sacrifice his secure position, or move with the company. Yin decided to answer a new calling in life and pursue a third direction instead.
The McDonald’s sign was the real American dream to Yin, as it represented the infinite opportunities the land had to offer. Even as an engineer, Yin was fascinated by the enterprise and its motto to reinvest in the community, and always wanted to operate his own McDonald’s someday. The process to realizing this goal however, was anything but
smooth. Yin was rejected many times before being finally admitted to join the enterprise in 1984. Even then, he faced the challenge of having a store that had gone through six previous owners within 20 years. Like many times before Yin faced the obstacles with the same unyielding attitude that had carried him through as a struggling immigrant. Engineering a management plan around the community and neighborhood, Yin asked his wife to quit her job as a licensed social worker in San Mateo County and help set up local programs to enhance neighborhood safety. By bringing in the community, Yin and Regina were able to help provide guidance to youths and build a support network around their McDonalds’s.
18 months after taking over the McDonald’s, the restaurant began to turn a profit. His innovative idea in tying together his business with the neighborhood and local government turned out to be pivotal for success. Using the same framework, Yin began building his McDonalds’s empire by purchasing four more McDonalds’s in Alameda
County. In 1991, Yin and Regina decided to shift their business to Solano County, where they bought four Macdonald after selling the five in Alameda. By 2010, after nearly 30 years in the restaurant industry, he and Regina owned 26 McDonald’s in Solano and its neighboring counties.
Yin also succeeded in his passion for giving back to the community by promoting the political involvement of Asian Americans. Catching the eye of political activist, Michael Yamaki, with his success in working with government officials, Yin was urged to become more involved in politics.
In 2001, Yin founded the Asian Pacific Islanders Public Affairs Association to promote political awareness among the APA community. The goal was to combat the lack of political representation by Asian Pacific Americans despite their growing numbers that severely undermined expression of community opinions. The results were phenomenal. Through leadership training, teambuilding, and winning public support, APAPA has successfully introduced 15 Asian Pacific Americans to political officers statewide. Yin has donated millions of dollars to support APAPA and its political candidates.

Some videos of CC Yin on Ding Ding TV:

3
Yin has also founded the Chinese American Association of Solano County (CAASC) and the Solano Chinese Language School; other ways that Yin has given back to the Chinese American community. Yin also holds numerous positions in community organizations and has provided financial assistance to many. In recognition of his community services
and contributions to education he was appointed as a trustee of the California State University System in 2010.
Yin is known as an immigrant, an engineer, an entrepreneur, and a philanthropist, but most importantly, as a man that truly unifies and gives back to the community.

Philanthropy: C.C. Yin donated millions of dollars to APAPA to promote Asian American politicians and community issues. He has also donated to various other organizations such as the Chinese American Association of Solano County (CAASC) and the Solano Chinese Language School.

Yin’s Ranch was damaged badly by wildfire, Not only CC and Regina’s home, but the community center for Asian Americans