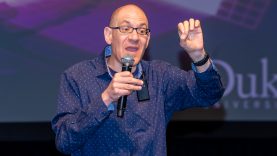 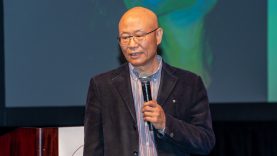 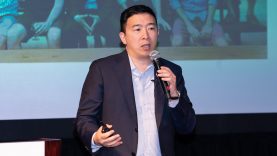 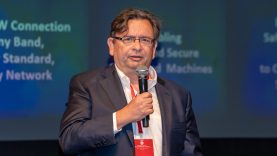 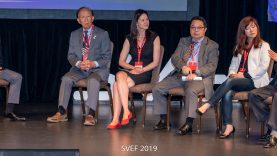 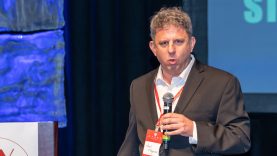 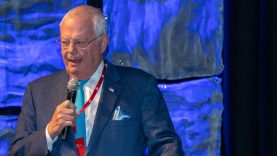 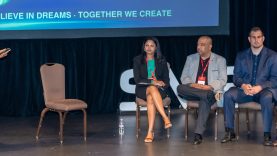 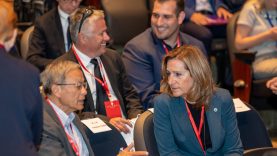 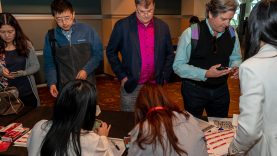 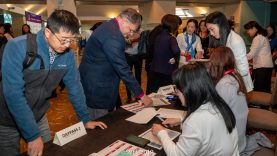 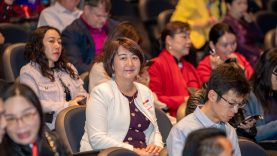 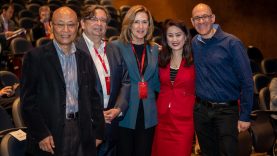 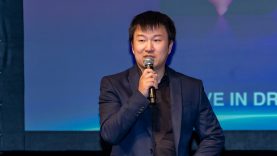 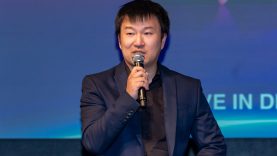 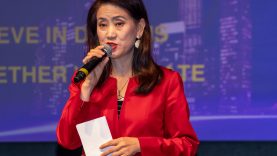 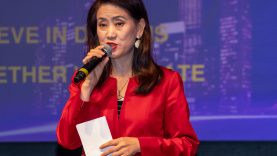 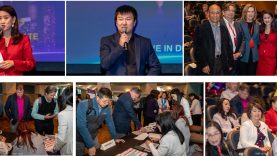 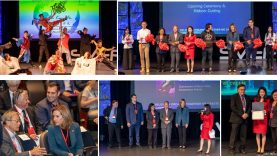 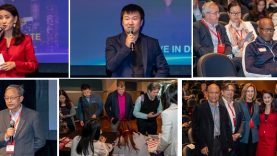 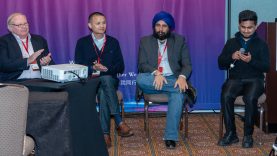 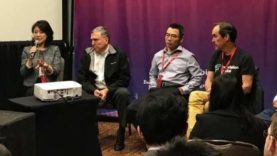 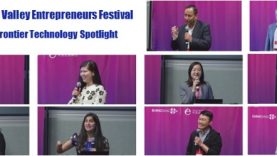 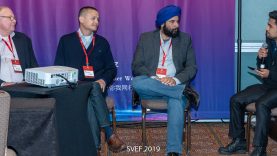 The theme of the 4th Silicon Valley Entrepreneurs Festival held on May 2, 2019 at the Santa Clara Convention Center was “Believe in dreams, Together we create.”  This Festival organized jointly by Ding Ding TV and China-US Business Summit, and co-hosted by Acorn Campus, has grown each year. This year, more than 1,000 registered attendees and 60 partners heard nearly 200 speakers, thus providing ample networking opportunities for both entrepreneurs and investors.

The well-paced program moderated by Amrita Singh (INDTVUSA) kicked off with a high-energy “Battle Silicon Valley Innovation Kung Fu Show performed by the FeiShiFu Kung Fu Academy.  Next, brief introductory statements were given by Sandy Chau, Honorary Chairman of Silicon Valley Entrepreneur Festival, Diane Ding, Chairwoman of the Festival, Steven Shen, Co-Chair of the Festival, plus the mayors of Santa Clara and Cupertino, and the President of the Santa Clara Chamber of Commerce. 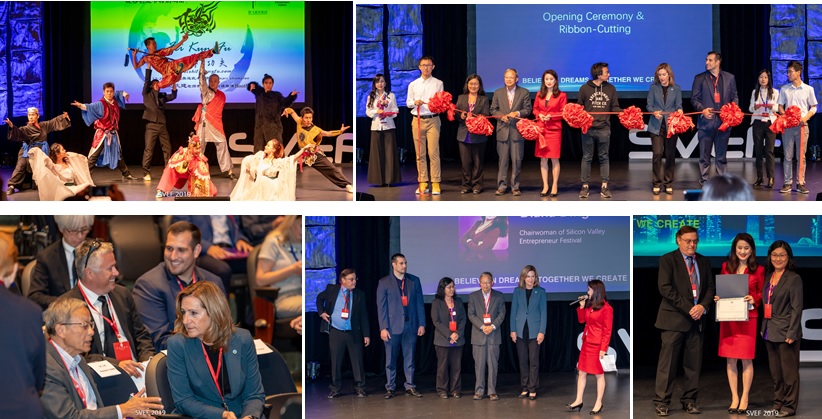 Steve Hoffman, CEO of Founder Space, an accelerator for global investors, and the author of “Make Elephants Fly,” gave a provocative speech. He posited that the next step in human evolution is the brain-computer interface, and provided examples of technologies currently in research and development.  He predicted that an operating system (OS) for brain software is coming, which would allow the downloading and sharing of human knowledge. But will this lead to hacking our brains?

This keynote was given by Chih-Kai Cheng, Acorn Pacific Ventures Co-founder/General Partner, and author of “Password to Innovation” and “Human Values Beyond Silicon Valley.” Following in the footsteps of founders like John Mackey, who is the founder of Whole Foods, today’s young entrepreneurs are seeking a purpose for their businesses that benefits society. This social movement was highlighted in an article entitled “Millennial Socialism,” which was featured on the February 14 cover of The Economist magazine. This movement has given rise to new business structures, such as certified B corporations and benefit corporations that provide public benefits and sustainable value, in addition to generating profits. These companies, as well as non-profits, need solid business models that allow their organizations to “eco-scale,” and thus provide the greatest benefit.  This approach guides Acorn as it funds entrepreneurs.

Keynote: Humanity First:  The case for the Freedom Dividend – Prepare for the Robot Revolution

Andrew Yang, the first Chinese American Democratic presidential candidate, spoke eloquently about the impact of technology on the U.S. workforce.  Mr. Yang is the founder of Venture For America (VFA), which was established to recruit the nation’s top college graduates into a two-year fellowship program in which they work for an apprentice at promising startup companies in developing cities across the United States, rather than in large U.S. cities.  This experience in startups and small businesses then leads to the next generation of entrepreneurs and small businesses located in small to medium-sized cities, rather than in large urban areas. In 2015, Mr. Yang was recognized by the Obama administration as a “Presidential Ambassador for Global Entrepreneurship” for his work. He has qualified for the Democratic presidential debates in June by having more than 3% support in the Emerson Poll, and more than 100,000 individual campaign donors.

Mr. Yang spoke to the disruption of the American labor market with regard to the use of artificial intelligence (AI) with adaptive technology. For example, what will be the social impact when self-driving trucks replace truck drivers, currently the most common job in the U.S.?  Robots have already replaced people in manufacturing, thereby contributing to the decline of economies in the Midwest.  Mr. Yang attributes the election of Trump to the spread of automation throughout the Midwest election swing states, where more than 5,000 jobs have been lost.  An estimated 1,000 of those jobs were lost due to outsourcing to other countries, while the other 4,000 jobs disappeared due to automation.

Job loss and loss of income have a negative impact on society; therefore, Andrew Yang’s campaign is based on a Freedom Dividend, which translates to a universal guaranteed income for all. He cited a statistic showing that labor participation has dropped to 63% in these manufacturing areas.  This has led to significant increases in disability claims and deaths, as well as more single mothers. The sons of those single mothers grow up without a male role model, which perpetuates a downward cycle.  Reversing the mindset of scarcity by providing a guaranteed basic income and encouraging the development of entrepreneurs in these areas with significant jobs losses would benefit the public as a whole.

Ivo Bolsens, SVP and Chief Technology Officer at Xilinx and the Xilinx University Program, identified opportunities for machine learning in data centers, 5G wireless, the IOT (Internet of Things), and autonomous cars.  The challenge is that innovation outpaces silicon cycles, as 2-3 years are required to retool a chip facility.

Moderated by Chuck Ng, Director of Community Outreach and Development for Civic Leadership USA (CLUSA), this panel focused on the importance of civic leadership at local, state and national levels.  C.C. Yin, Founder of APAPA (Asian Pacific Islander American Public Affairs), which is currently strongest in California, is actively expanding his organization to additional states. Anthony Ng, Executive Director of CLUSA, emphasized that social enterprises must make money to provide scalability, even if they are non-profits. Amy Kwok, Founder and CEO of PenguinSmart, spoke about using medical technology to do social good in her work with children who have communication delays. Margaret Conley, Executive Director of Asia Society Northern California, organizes events in 14 centers worldwide to bridge understanding between Asia and the U.S, despite the headlines in the news about China-U.S. relationships. David Yu, the former congressman from Oregon, described the government as “not very good at innovation,” and cited the involvement of the private sector in the successful rollout of Obamacare.

Paul Wagner, 5-time EMMY Award Winner and CEO of Creative Lab TV, gave an entertaining presentation on the characteristics of “rock star” entrepreneurs.  These characteristics include spending most of their time with customers and pivoting upon competing evidence.  Most startups fail because of the CEO’s attitudes and inflexibility, rather than insufficient technical skills.

Dixon Doll, General Partner of Impact Venture Capital, talked about “investing in dreams.”  Last year, venture capital investing was led by the U.S, followed by China, and then distantly followed by Europe, India, and the much smaller country of Israel. Attractive investment sectors include cybersecurity, digital health, and 5G wireless. Female founders are doing well as entrepreneurs.  Changes in U.S. policy and specifically those of the Committee on Foreign Investment in the United States (CIFUS) are of concern.

Panel:  How can big companies work with local businesses to support community development?

Moderated by Harbia Bhatia, 2018-2019 Chair of the Community Relations Committee, Santa Clara Chamber of Commerce, this panel discussed and described very practical methods by which entrepreneurs can contribute to their communities, and at the same time, establish relationships with buyers in big companies.  Nick Kaspar, President/CEO, explained that large companies often contact the Chamber to find vendors that can meet their needs. In turn, small businesses often experience difficulty finding the right contact in large companies, and the Chamber and its volunteers can bridge that gap. Members of the chamber then shared their experiences:

Kaiser Santa Clara Medical Center, represented by Chris Boyd, SVP/Area Manager, is the largest employer in the City of Santa Clara and looks to support the “economic health of the community.  For example, Kaiser contributed $200 million for housing for veterans and the homeless.  They provide funding to community organizations through an application process that identifies deterrents to health as a major focus; i.e., supporting a food pantry at San Jose State University so students don’t go hungry. Additionally, they actively seek to identify supplier diversity for a wide variety of goods and services and often connect with local small businesses through community events.

Ravinder Lal, the owner of a UPS store, started volunteering by shipping shoe donations for a Boy Scout troop and was overwhelmed by the level of appreciation he received. So he volunteered for more events, eventually meeting a parent who was working at Apple and needed more than 1,000 signs for a project. He got that large job, and even more business based on his contribution to the community; a truly win-win situation. He has found that supporting charitable events in the community can lead to connections with other volunteers who happen to be buyers in large organizations.

Sanjeev Acharya, the founder of  SiliconSage Builders, emphasized sustainable design as a contribution to the community. He also stressed that the construction industry includes not just companies that employ tradespeople, but also many small businesses such as real estate agents, architects, and designers. SiliconSage established a foundation to support non-profit organizations and encourages its employees to volunteer in their communities.

Panel Discussion: The VC evolution, and how that affects you

A team of well-known Silicon Valley VCs will talk about “The VC evolution”, and how that affects you?” Such as:

The energy level at the conference was high, with the noticeable buzz in the hallways and conference rooms. An attendee from Oracle “loved the agenda” and the opportunities to network with entrepreneurs and investors, and looks forward to an even larger event next year.

The relevant videos also can be found via the links below:

Keynote : Wake up to Digital Marketing Innovation In Chinese in the 4th Silicon Valley Entrepreneurs Festival

Digital Technology & How It Is Affecting You