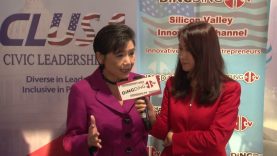 On September 6th, 2018, Silicon Valley Innovation Channel Ding Ding TV covered the summit, 2018 Asian American & Pacific Islander Leadership, in Washington DC. When the Congresswoman, Judy Chu, was interviewed by Diana Ding at the summit, she mentioned “This is one of the most critical election of all time.” If we could max-mine the voters’ registration and turnout, then we truly can make a different to return the country back to where we were before.

Chu was first elected to the Board of Education for Garvey School District in 1985. From there, she was elected to the Monterey Park City Council, where she served as Mayor three times. She then was elected to the State Assembly and then California’s elected tax board, known as the State Board of Equalization. In 2009, she became the first Chinese American woman elected to Congress in history.
source: https://chu.house.gov/about/full-biography
APIAVOTEAsian American Leadership SummitCivic Leadership USADing Ding TVElectionindexJudy ChuSandy ChauWashington DCWhat's at Stake in 2018