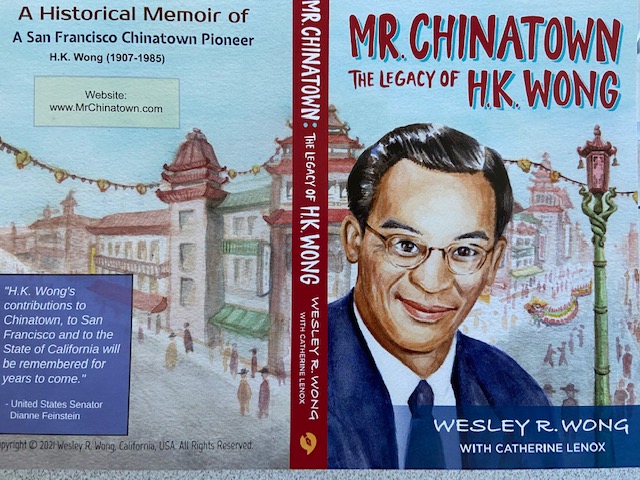 THE LEGACY OF H.K. WONG LIVES ON

LEGACY OF H.K. WONG LIVES ON

What a rare delight is the book, MR. CHINATOWN: HE LEGACY OF H.K. WONG that has just arrived to my desk.  From the beginning of my writing career chronicling the history of Chinese Americans past and present,  I remember  how it all started some 45 years ago.  On a chance meeting with H.K. Wong, a man I had long admired for his writing about San Francisco’s Chinese community back in the 1950s -1970s, I told him I enjoyed reading his column in the Vancouver, Canada, magazine, CHINATOWN NEWS.  Ever encouraging to anyone he would meet, he said, “You used to write about UC Berkeley news for the old Chinese Press newspaper out of San Francisco Chinatown,  so why don’t you start writing about the burgeoning Silicon Valley’s growing Chinese community now?”   He introduced me to the Canadian Chinatown News Magazine editor, Roy Mah, and that’s how my new career began as a once a month columnist.  Flash forward to the mid 1980s and once again, I meet up with H.K. Wong, and he excitedly tells me about a brand new English language newspaper that is coming out of San Francisco Chinatown, and sets up a lunch date for me  to meet its publisher, John Fang. Often called the one-man press bureau for the entire Chinese community, H.K. became my P.R. mentor, and persuaded Fang (and me!) that I should report on the up and coming Asian American entrepreneurs in the high tech industry in my hometown Silicon Valley region for this weekly newspaper.  Thus began my own sojourn trying to follow in H.K. Wong’s big footsteps to chronicle the “beat” of the Chinese communities and become the unofficial Ms Chinese Volunteer for Santa Clara Valley.

Now, I am pleased to report, the life of H.K. Wong is coming to the fore through a book his adopted son Wesley Wong has just published. Wesley’s book about his dad gives a rare glimpse into San Francisco Chinatown from the 1930s to the 1980s and how Henry Kwock Wong, better known as H.K. enhanced the life of so many people in that Chinatown. 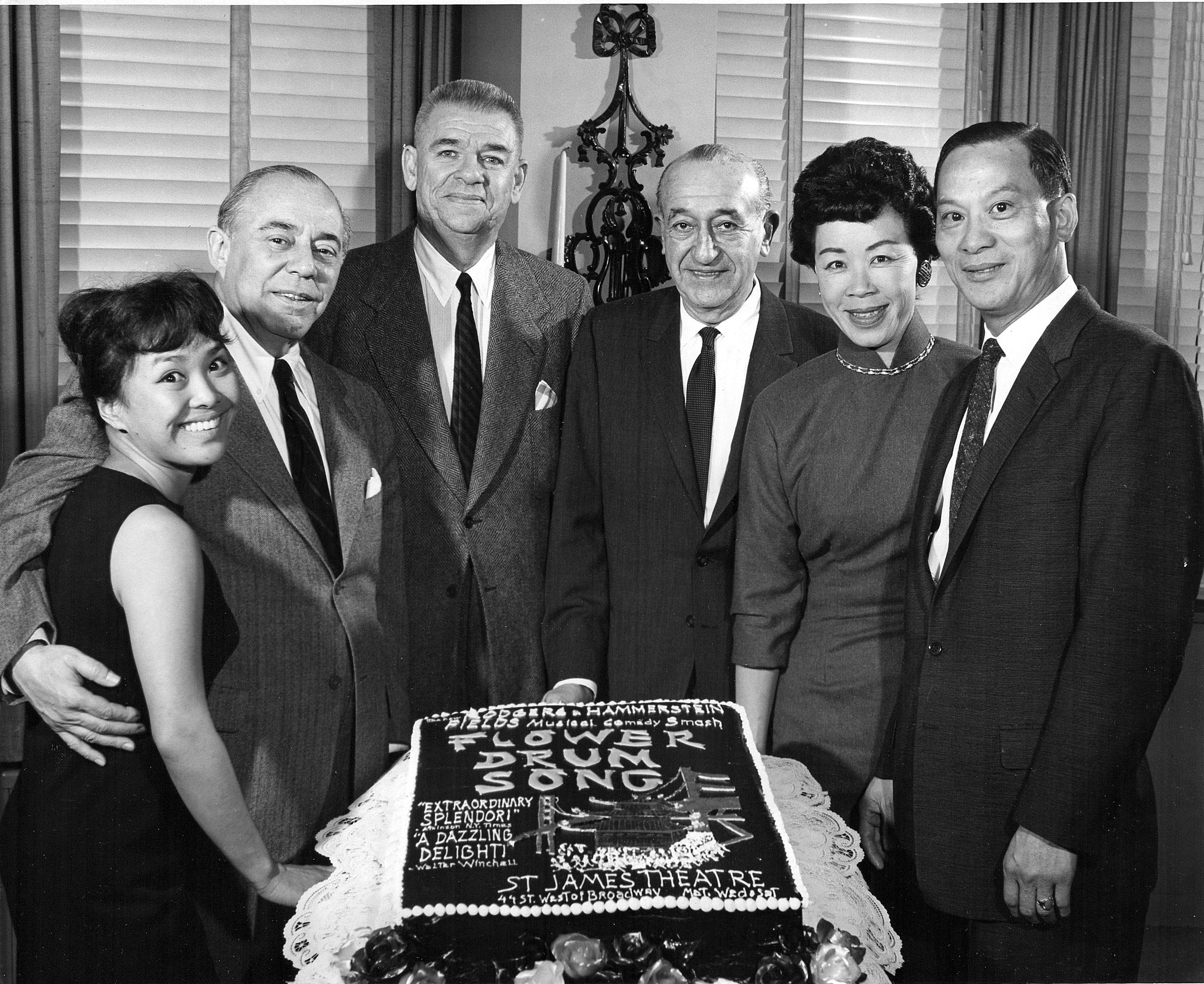 As an example of H.K. Wong’s stature in the Chinese community as seen by the outside world. when the star and composer authors of FLOWER DRUM SONG,  Pat Suzuki, Richard Rodgers, Oscar Hammerstein, and  Joseph Fields, seen in photo above,  celebrated the first anniversary of the musical on Broadway, they invited Honey and H.K. on December 1, 1959. to its NYC opening.  H.K. had been their technical advisor  they consulted when making the movie.

It is said that H.K. Wong laid the very foundation for today’s Chinatown. As a second generation Chinese American, he became such a popular personality in San Francisco’s Chinatown he was often dubbed the “Mayor of Grant Ave” by noted S.F, Chronicle columnist Herb Caen.   Actually in 1987, the San Francisco Examiner posthumously selected him as one of the most memorable San Franciscans over the past hundred year, in celebration of the newspaper’s centennial. 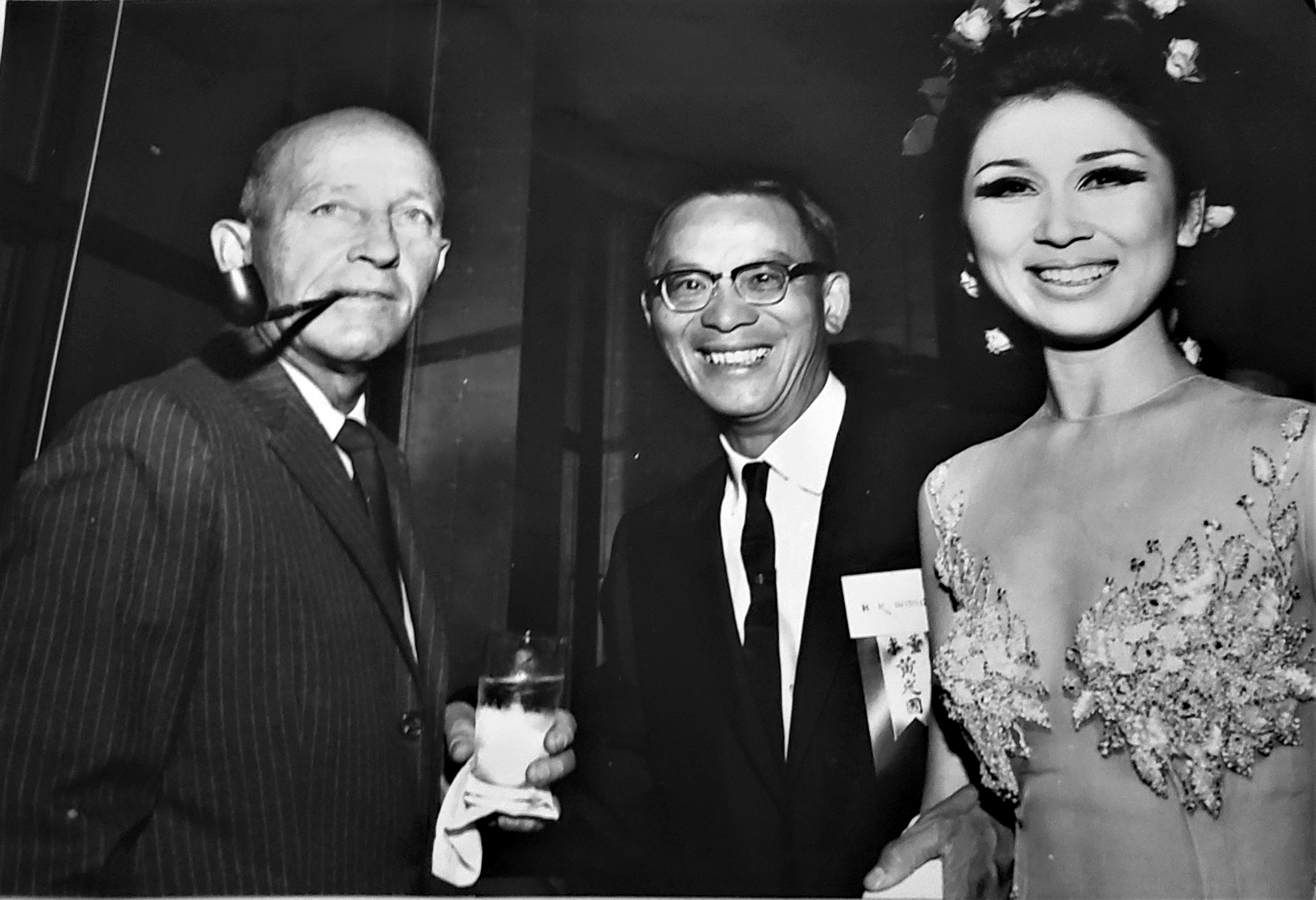 Always wanting to raise the status of San Francisco’s Chinatown in the eyes of the outside world, H.K. wanted to bring a world class Chinese restaurant into the community. He was the co-founder and marketing director of the landmark Empress of China Restaurant which drew celebrities such as Bing Crosby and Rosie Fang, seen in photo, at the grand opening on August 15, 1966.

Putting down on paper all of the accomplishments his dad had made to San Francisco’s Chinese community was a big job for Wesley who said he had to delve into multiple boxes of memorabilia he had stored for too many years to get this book written.  H.K. left an indelible mark acting as the volunteer one-man press bureau for the entire Chinese community in those 50 years in San Francisco and the book tells all for so many of us who remember, and for the generations who didn’t have the privilege to know him.  His accomplishments, however, are his lasting legacy. 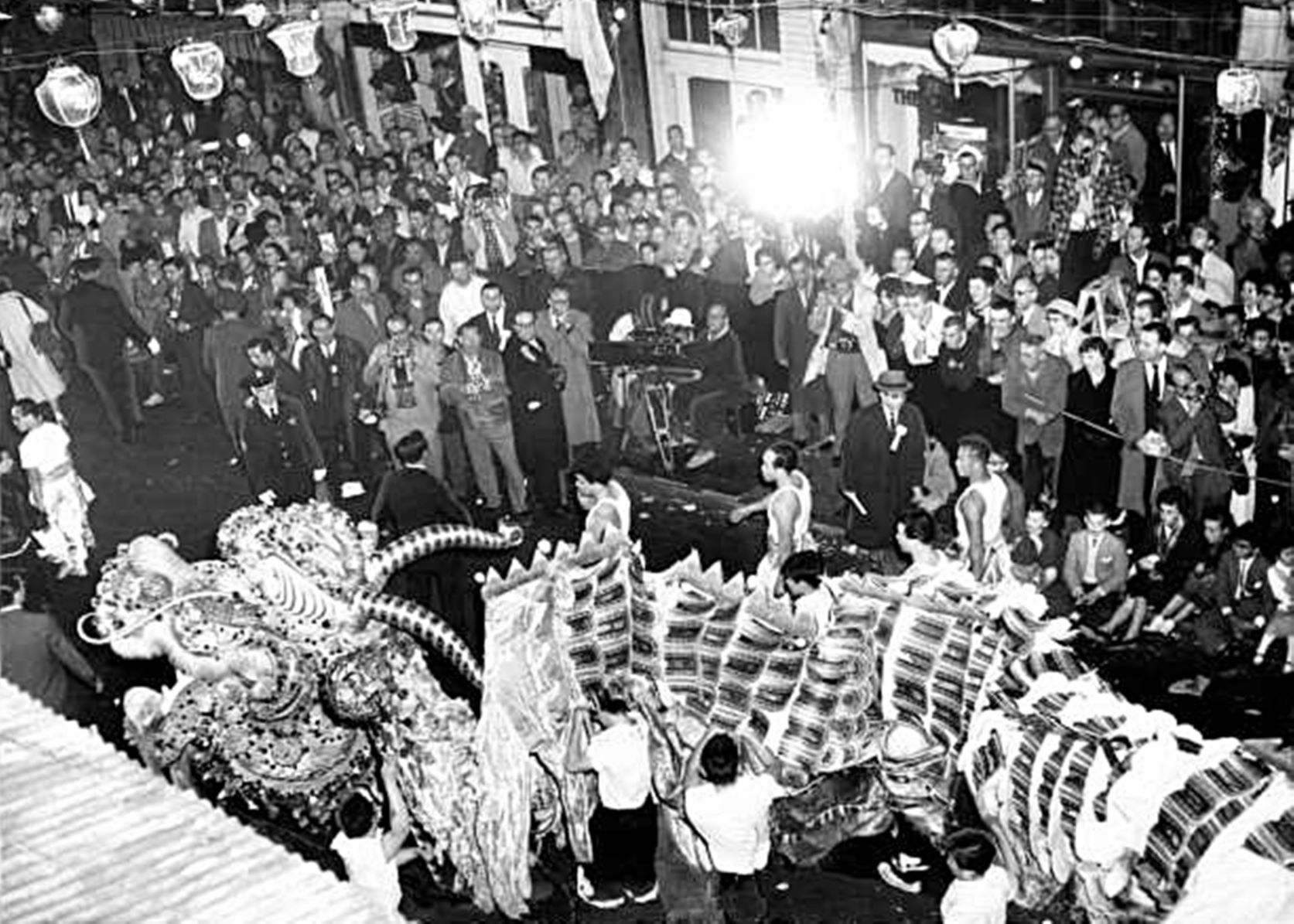 Today the Chinese New Year Parade is noted by citizens around the world, and is the most prestigious parade to celebrate this Chinese holiday. This was H.K. Wong’s vision in 1953 when he brought the idea to Chinatown leaders and founded the very concept of the parade and festival over 60 years ago in 1953.  It started modestly marching down Grant Avenue, but now is seen by millions of viewers worldwide.  Along with the parade, he started the Miss Chinatown USA Pageant in 1958 as one of the events during the Chinese New Years Festival celebrations which drew locals and tourists’ interest to San Francisco where the pageant was held.

Besides running two successful hardware businesses in Chinatown, his two accomplishments still standing were his instigating the Chinese New Year Festival and Parade as well as the Miss Chinatown Pageant which brought in contestants from all over the U.S.A, vieing for the prestigious title of Miss Chinatown USA. His involvement in co founding the Chinese Historical Society of America was the beginning of an awareness of the importance of preserving Chinese American history. His hand was  instrumental in bringing the People’s Republic of China’s 2000 year old Han Tang Murals to San Francisco in 1977. 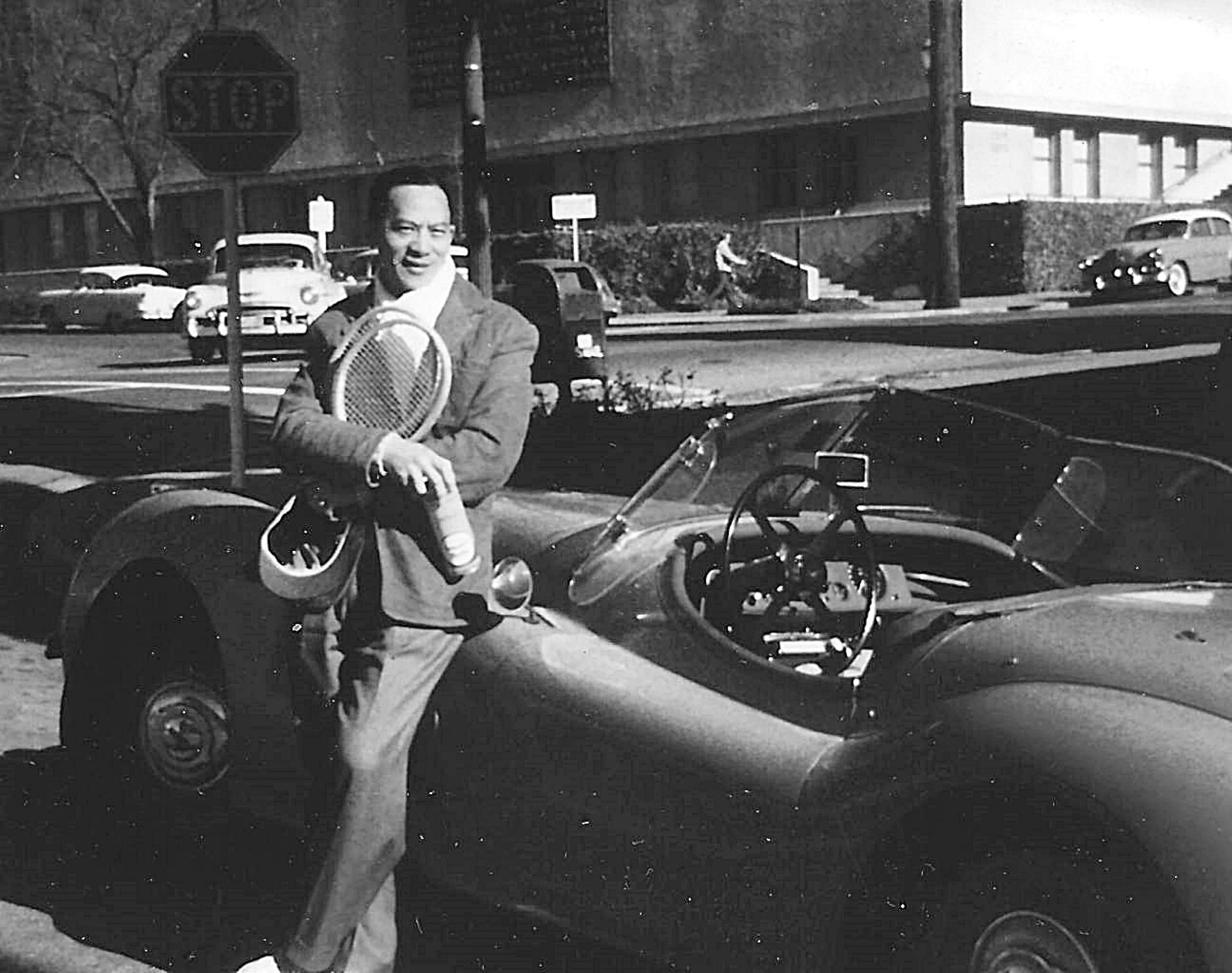 As founder of the San Francisco’s Chinese Tennis Club in 1935 , during an era when Chinese champions were never recognized nor welcomed in authorized tennis competitions, he was the first Chinese American to serve on the Board of Directors of the Northern California Tennis Association in the late 1940s and was posthumously inducted into their Hall of Fame.  He brought tennis to Chinatown with its one court only  set beside an alley in the heart of the San Francisco site. 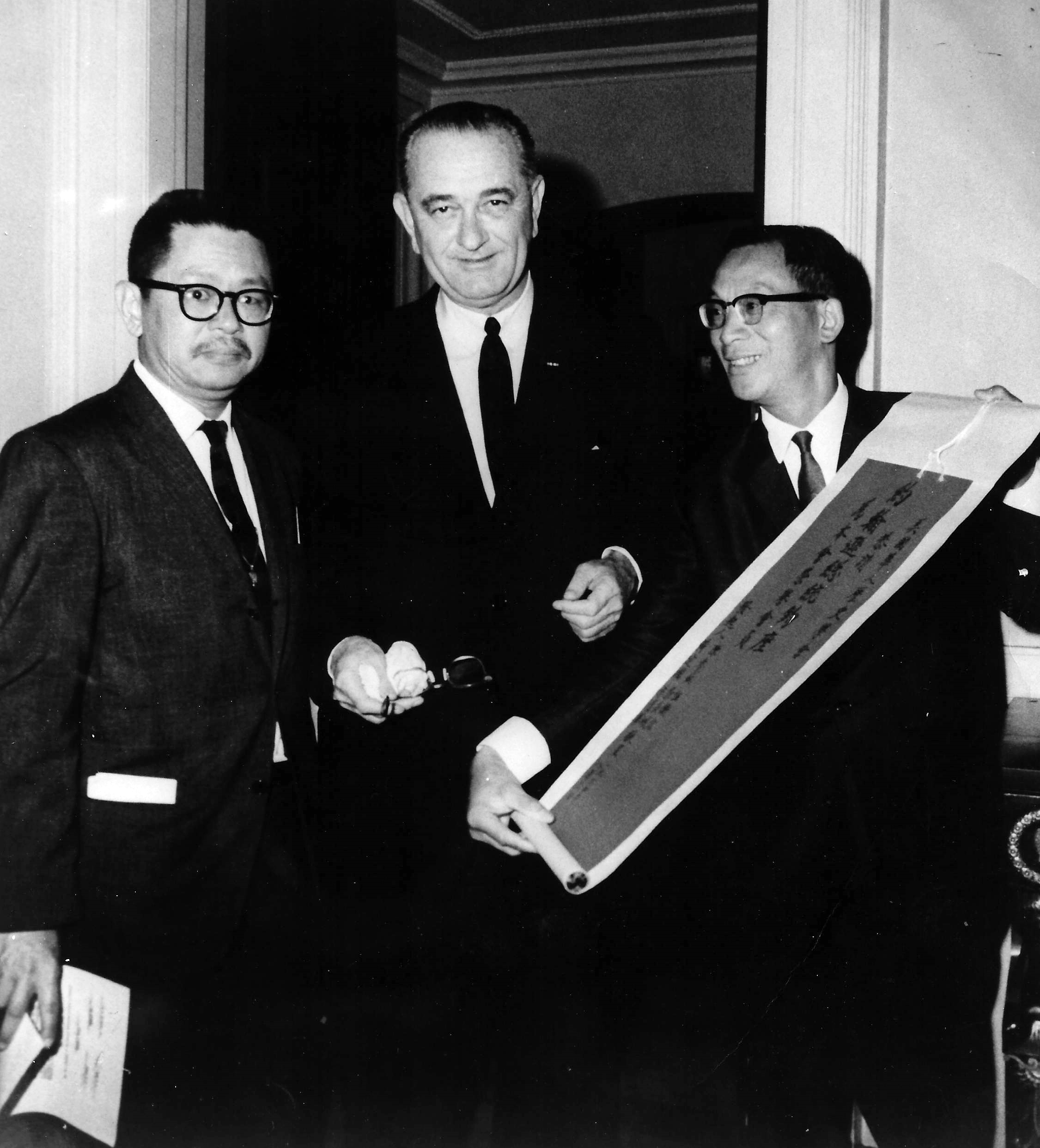 In 1964, as seen in the photo above, C.H. Kwock and H.K. Wong presented a Chinese scroll to President Lyndon Johnson at the White House and proclaimed him an honorary member of the Chinese Historical Society of America (CHSA) of which he was one of the original founders. The  CHSA, which exists today with its museum on Clay Street in the heart of Chinatown, was the first organization of its kind in the United Stated devoted to preserving and presenting Chinese American history.  One of H.K. hobbies was combing California for artifacts chronicling the lives of Chinese workers who mined for gold and worked on the building of the  Transpacific Railroad in the mid-1800s.

Obviously the importance of this book to San Francisco Chinatown and California history is significant and as United States State Senator Dianne Feinstein said in the foreward, “H.K. Wong’s contributions to Chinatown, to San Francisco, and to the State of California will be remembered for years to come.”    The book, Mr. Chinatown, Wesley tells us, is available online from the following bookstores by checking their websites at Barnes & Noble, online; Folio Books, NOE Valley, S.F., and Books-A-Million.  Connect with Wesley Wong’s website www.Mrchinatown.com for more information.  I heartily recommend this book to all who want to know more about the history of San Francisco’s Chinatown, and how  H.K. Wong influenced its progress to making it a landmark historical landmark  in the history of San Francisco.