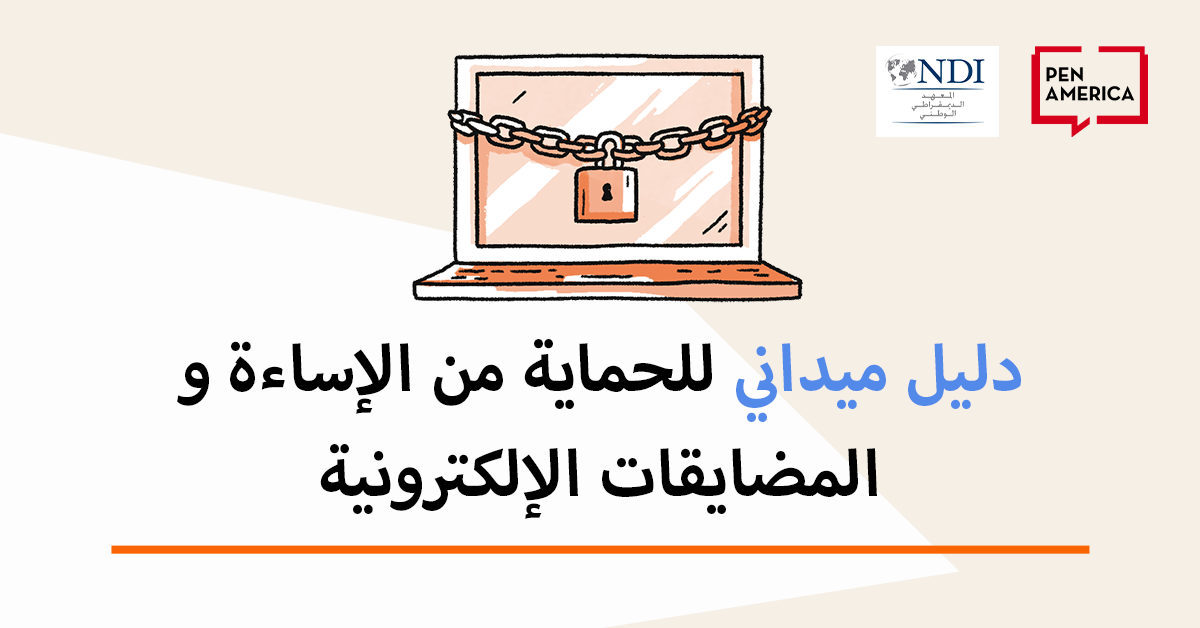 Manual Offers Guidance and Resources to Defend Against Doxing, Impersonation, and Other Abusive Tactics Online

November 15, 2022
(BEIRUT/NEW YORK) — The literary and free expression group PEN America, in partnership with the international democracy building organization National Democratic Institute, has launched the first Field Manual against Online Harassment in Arabic ( دليل ميداني للحماية من الإساءة و المضايقات الإلكترونية,) to support Arabic-speaking writers, journalists, and human rights activists who are trying to make their voices heard while facing online abuse and harassment. Developed in close consultation with digital security experts, psychologists, journalists, and human rights defenders in the Middle East and North Africa region, the manual offers practical tools and strategies to defend against online abuse, which PEN America has long argued poses a profound threat to free expression and the freedom to write.For years, online abuse was dismissed as less harmful than physical violence. But amid a surge in virtual hatred, there is growing recognition that it has a devastating impact on livelihoods, mental health, and freedom of expression and can lead directly to offline violence. The situation is particularly dire for women journalists: 73% have experienced online abuse, according to global study from UNESCO and ICFJ.

“While online abuse is a universal threat to journalists and human rights activists worldwide, there are unique challenges facing those living in the MENA region that require equally unique response strategies. In an environment where democratic backsliding and digital authoritarianism are on the rise, it is more important than ever that MENA citizens have access to Arabic-language materials that are properly contextualized for the dangerous threats they face on a daily basis. We are proud to have contributed to such guidance and hope that readers of the manual walk away feeling empowered and equipped with the right tools to continue working in difficult environments.” said Mirvat Salameh, project manager for the Middle East and North Africa at the National Democratic Institute.

“Online abuse is a deliberate attempt to stifle press freedom and creative expression. As an organization of and for writers, PEN America is committed to working with our partners in the MENA region and around the world to ensure that writers, journalists, artists, and human rights defenders are empowered to defend themselves and continue making their voices heard,” said Viktorya Vilk, director for digital safety and free expression at PEN America.

“The ability to exchange ideas freely and without fear of violent retribution is central to open, democratic societies. This manual, based on the experiences of writers and advocates around the world, provides tools to help Arabic-speaking journalists and activists more safely exercise their fundamental rights to freedom of expression.” said Lindsay Workman, senior advisor for the Middle East and North Africa region at the National Democratic Institute.

The manual offers comprehensive guidance and resources on defending against doxing, impersonation, and other abusive tactics. While the content is geared toward writers, journalists, and human rights activists, the guidance is relevant to anyone facing or witnessing hostility online—especially women and those who identify as members of a marginalized group. The manual includes:

The Online Harassment Field Manual is available free in Arabic at https://onlineharassmentfieldmanual.pen.org/ar/

About PEN America: Founded in 1922, PEN America stands at the intersection of literature and human rights to protect open expression in the United States and worldwide. We champion the freedom to write, recognizing the power of the word to transform the world. Our mission is to unite writers and their allies to celebrate creative expression and defend the liberties that make it possible. For more information, see: pen.org

About NDI: The National Democratic Institute (NDI) is a nonpartisan, nongovernmental organization that responds to the aspirations of people around the world to live in democratic societies with open and multiparty political systems that recognize and promote basic human rights. Since its founding in 1983, NDI and its local partners have worked to establish and strengthen democratic institutions and practices around the world by building political and civic organizations, safeguarding elections, and promoting citizen participation, openness and accountability in government.To learn more about NDI’s work around the globe, please go to www.ndi.org.