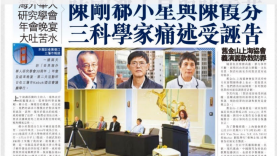 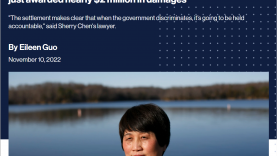 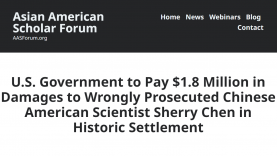 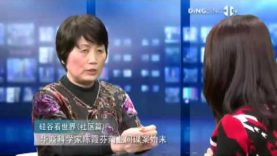 On November 10, 2022, the legal team for Sherry Chen, an award-winning Chinese American Scientist in the U.S. Department of Commerce, announced that the U.S. Government agreed to pay Sherry Chen almost $2 million in damages as settlement for the injustice Sherry endured in the past ten years.

“Today’s settlement is not only a victory for me; it is also a victory for our community and for the rule of law. It makes clear that profiling and discrimination are unacceptable, and that rogue investigative units like ITMS have no place in a democratic society. The government cannot escape the consequences for these wrongs. It will be held to account.” Sherry said in a letter to supporters, “Of course, no amount of money can ever fully repair the injustices I’ve experienced. But today’s settlement is a critically important step toward achieving justice for myself and for so many Chinese Americans who have been subjected to unjustified government scrutiny.”

Today is a day for celebration. I’m writing to announce a historic settlement in my two lawsuits seeking accountability for the government’s illegal and discriminatory investigation of me, its wrongful prosecution, and its termination of my employment with the National Weather Service.

Today’s settlement is not only a victory for me; it is also a victory for our community and for the rule of law. It makes clear that profiling and discrimination are unacceptable, and that rogue investigative units like ITMS have no place in a democratic society. The government cannot escape the consequences for these wrongs. It will be held to account.

Of course, no amount of money can ever fully repair the injustices I’ve experienced. But today’s settlement is a critically important step toward achieving justice for myself and for so many Chinese Americans who have been subjected to unjustified government scrutiny.

Your unwavering support has been essential to this fight every step of the way. Although I’m unfortunately unable to celebrate with each of you in person, please know that I’m thinking of each of you, and I am so grateful for your kindness and generosity over this years-long fight. You’ve given me the strength to go on. Thank you so much!

“It has been over a decade since Sherry Chen was accused of espionage, yet another Chinese American who was targeted because of their race, this time by the Department of Commerce’s rogue ITMS unit, which was disbanded last year, in part due to CAPAC’s advocacy. Even after the Department of Justice dropped all charges against her, when a federal administrative judge ruled her termination unlawful, Commerce chose to appeal the decision–an action which had been pending since 2018. CAPAC has been at the forefront of discrimination and profiling of Chinese American researchers, including by our own government agencies, and I have been closely following Ms. Chen’s case for years. This historic settlement is a welcome symbol to restore justice to Ms. Chen, and I’m pleased that at long last, Ms. Chen’s ordeal has reached a fair conclusion.”

2. In-Person Announcement During “Racial Profiling and Discrimination against Chinese American Scientists and Engineers” 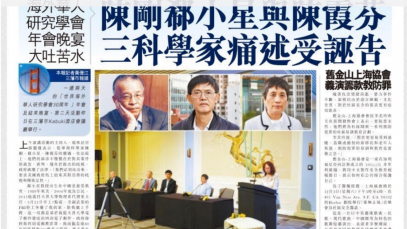 On November 12, 2022, Sherry Chen made an in-person announcement of her historic settlement during the panel presentation on “Racial Profiling and Discrimination against Chinese American Scientists and Engineers” in San Francisco, which was part of the 30th Anniversary Conference of the International Society for the Study of Chinese Overseas. The session was moderated by Judge Lillian Sing (Retired). Other panelists included Temple University Professor Xiaoxing Xi and MIT Professor Gang Chen who described their own experiences of profiling by the Government. Jeremy Wu, Founder and Co-organizer of APA Justice, provided a recap on the formation and role of APA Justice since the Fall of 2015. 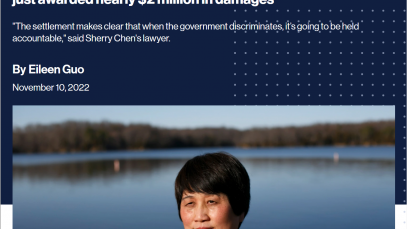 According to the report, Sherry Chen’s case was an early instance of what would become a much bigger pattern of the US government’s increasing suspicion of Chinese and Chinese-American scientists amid growing competition between the US and China. The settlement is a personal and symbolic victory after years of persecution.

Chen’s case mobilized a grassroots advocacy network of concerned Chinese-American citizens, who raised awareness about her experience, lobbied members of Congress on her behalf, and raised money for her legal defense. One of these groups would later become APA Justice, one of the most vocal and consistent voices against the China Initiative and racial profiling.

For many observers, the parallels were clear. “With the China Initiative, we have seen several failed and weak prosecutions. Ms. Chen is certainly not alone in that regard,” Ashley Gorski, a senior staff attorney with the ACLU National Security Project, which helped represent Chen, told MIT Technology Review.

Chen’s settlement is not quite the apology that Chen’s supporters, organized by the advocacy organization APA Justice and signed by over 1,000 individuals and organizations, demanded in an open letter sent earlier this year to Gina Raimondo, the secretary of commerce. However, the chance to sit down with Commerce Department officials and the promise of a written acknowledgment “were very important to Ms. Chen and were negotiated as part of the settlement,” Gorski told MIT Technology Review.

The symbolism of her settlement may be especially welcome in the aftermath of the ill-fated China Initiative, which MIT Technology Review investigated last year and found to be ineffective with respect to its stated goals and to have overwhelmingly targeted individuals of Chinese heritage, who made up 90% of defendants.

The Biden administration officially ended the China Initiative in February, but numerous studies have pointed to its broader chilling effects on scientific collaboration between the US and China, as well as declining interest in the United States as a destination for higher education and research. Not to mention the lingering personal effects for individuals caught up in the web, even if they were ultimately cleared.

That gives added significance to the outcome of Chen’s lawsuits. “It’s an enormous victory for Ms. Chen personally,” said Gorski, “and for the Chinese-American community as well. The settlement makes clear that when the government discriminates, it’s going to be held accountable.”

On November 10, 2022, attorneys for Sherry Chen, a Chinese American scientist with the National Weather Service, announced a historic settlement in two lawsuits seeking accountability for her wrongful prosecution and termination from her job.

In 2012, the Commerce Department’s internal security unit, known as the Investigations and Threat Management Service (ITMS), began unlawfully investigating Ms. Chen as part of a broad pattern of discrimination directed at Chinese Americans, leading to her baseless arrest and prosecution by the FBI and Justice Department. ITMS was officially disbanded last year, following a Senate report detailing how the unit had become a “rogue, unaccountable police force” that operated outside the law and “opened frivolous investigations on a variety of employees without evidence suggesting wrongdoing.”

The settlement is one of the largest paid to an individual plaintiff in Commerce Department history.

Based on ITMS’s improper investigation of Ms. Chen, the Justice Department charged her with making false statements to government investigators and unlawfully downloading data from a restricted government database. The government’s unfounded allegations rested on Ms. Chen’s use of a shared, office-wide password to access a database relevant to her work. The Justice Department eventually dropped all charges in 2015, but not before Ms. Chen was publicly arrested in front of her colleagues and faced 25 years in prison and $1 million in fines. The Commerce Department also fired Ms. Chen from the job she had worked at for years. After a federal administrative judge found that her termination was unlawful, and that Ms. Chen had been the victim of a “gross injustice,” the department appealed and placed her on indefinite leave. That appeal has been pending since 2018 before the Merit Systems Protection Board (MSPB), an agency that hears claims from federal employees.

The settlement marks the end of the MSPB litigation and a separate federal lawsuit against the U.S. government, filed in 2019 by Ms. Chen’s counsel, Peter Toren and Michele Young. The American Civil Liberties Union and Cooley LLP joined as co-counsel in that suit last year. Stephen A. Simon, partner with Tobias, Torchia & Simon, represents Ms. Chen before the Merit Systems Protection Board.

“Ms. Chen’s historic settlement is a victory for her and for Chinese American communities,” said Ashley Gorski, senior staff attorney with the ACLU National Security Project. “It makes clear that profiling and discrimination are unacceptable, and that the government will be held to account.”

Additional statements from Ms. Chen’s attorneys are below:

“For years, the Commerce Department refused to take responsibility for destroying Ms. Chen’s career,” said John Hemann, partner at Cooley LLP. “Today’s settlement is a win for the rule of law and helps to ensure that rogue units like ITMS will not be allowed to take root.”

“Today, a great blow was struck against bigotry and for the rights of Asian Americans, as the government was forced to reckon with and be held accountable for the devastating damage to an award-winning scientist’s life,” said Michele Young, Managing Partner at Michele Young Co., LPA and Counsel to Gregory S. Young Co., LPA. “After a ten-year battle, from Congress to the Courts to Commerce, finally, there is justice. Sherry patriotically fought not only for herself, but to secure the rights of all Asian Americans. It was a privilege to be on this dream team that fought day and night for this moment.”

“Ms. Chen’s ordeal has lasted more than ten years,” said Peter Toren, counsel for Ms. Chen. “She bravely persevered in this fight, inspiring countless others who have experienced similar forms of discrimination.”

The American Civil Liberties Union is a nonprofit organization founded in 1920 “to defend and preserve the individual rights and liberties guaranteed to every person in this country by the Constitution and laws of the United States”. 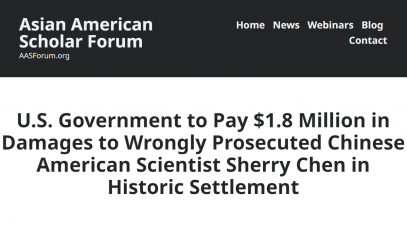 Asian American Scholar Forum. “This settlement is a tremendous victory not just for Sherry Chen, but for Asian American scientists, researchers, and scholars across the country who have been accused or had to live with suspicion for simply doing their jobs,” said Executive Director Gisela Perez Kusakawa. “We commend Ms. Chen for her spirit and perseverance during an unimaginably painful decade. We also thank and congratulate her attorneys with the ACLU and all the civil rights and community organizations who have supported her over the years. This victory is a reminder of the crucial role of legal professionals on the ground fighting for justice. No one should have to endure what Ms. Chen endured. That’s why we will continue to fight racial profiling, call for accountability, and emphasize that anyone who is facing discrimination is not alone.”