DDTV
HomeSilicon Valley Asian American NewsTo See Where Immigration in the US is Headed, Look to Where It’s Been By Peter Schurmann 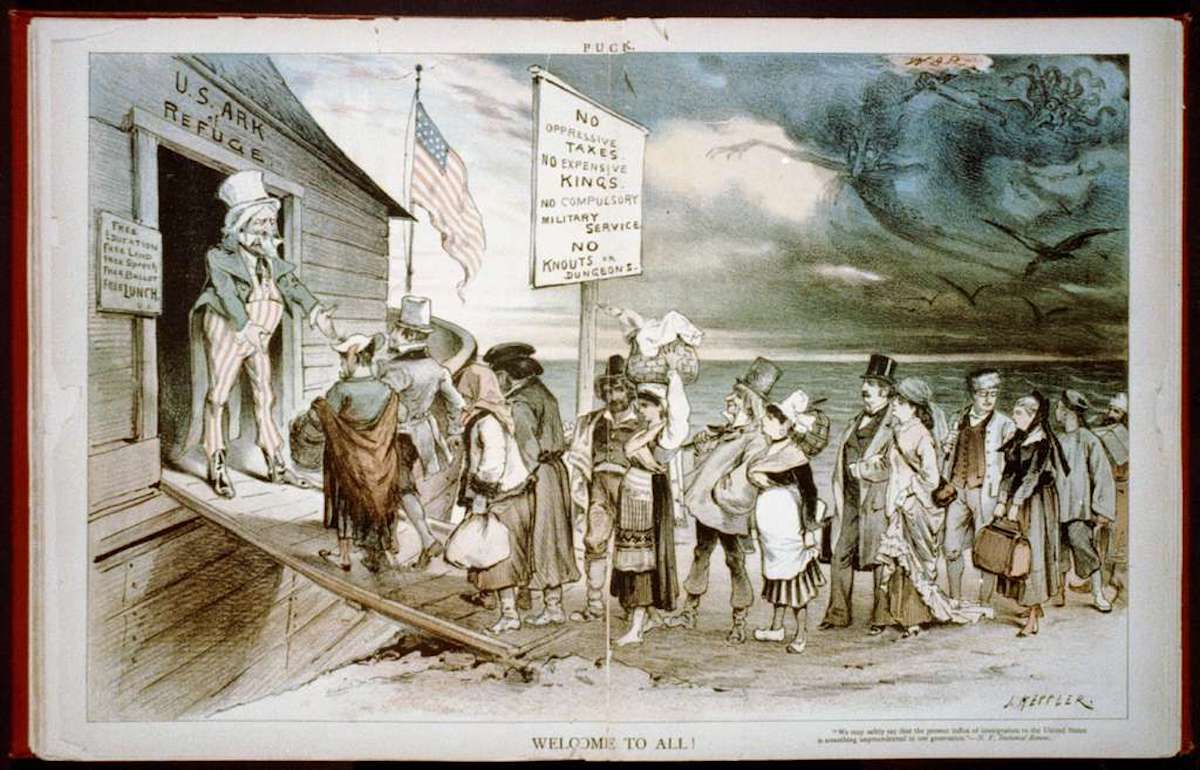 To See Where Immigration in the US is Headed, Look to Where It’s Been By Peter Schurmann

Immigration is quickly emerging as a key issue in the upcoming mid-term elections. Recent stunts by Florida Gov. Ron DeSantis and Texas Gov. Greg Abbot to ferry migrants to “sanctuary cities” in the north underscore the division over who and how many we allow into this country. Hasia Diner is professor of American Jewish history at NYU. Carl Bon Tempo teaches history at the University of Albany. In a new book, Immigration: An American History, the pair look at the role immigration has played in America’s history, and what that history tells us about our current moment. (Image: Welcome to All! J. Keppler, 1880, Library of Congress)

Carl Bon Tempo: The last two to three decades of scholarship by historians and others on immigration history has been wonderful and has taken the field in new directions. Our book tries to bring that new knowledge to the public to help us better understand this history and this idea of the US as a nation of immigrants. Take as an example the centrality of migration from Mexico in US history. We’ve seen a lot of great work in the last 20 to 30 years about that question… and it explains the world we live in today. Forty to fifty years ago scholars didn’t think in that way.

Arrests along the US’s southern border have topped 2 million annually. Is what we are seeing today unprecedented in terms of scope?

Hasia Diner:It is unprecedented in terms of the sheer numbers, but one of our points in the book is that the presence and role of the state in monitoring immigration has also grown and has moved from being an underfunded enterprise with very little ability to engage in surveillance to the mighty enterprise that it is now. And that comes out of a long frustration with the desire to patrol who is coming in. The ability to do this and the funding for it has grown exponentially.

What fueled that exponential growth in funding for border surveillance?

CBT: In the 1970s border funding resembled what the budget was for a small city’s police force. It was just not well funded or thought of as all that important. And yet over the last four decades other changes in American life, including the War on Drugs and the War on Terror, helped accelerate and build up surveillance along the border. Likewise, these events changed the bureaucracy in the United States and how it deals with homeland security, and a lot of that had to do with immigration and migration.

How does the climate crisis tie into this? Do you anticipate an increased flow of migrants as a result?

HD: You can never ask a historian about the future (ha!). But it is inevitable. But again, like anything else, there are other moments in time when climatic and environmental disaster spurred migration. The Irish migration of the mid 19th Century really gets charged up when a fungus kills the potato crop upon which people lived, making their homes uninhabitable. In the 1890s a fungus in grape crops in Northern Italy also spurred migration onward. Famines in Lithuania in the 1850s and 1860s… so this is not new, but the sheer size of what this new disaster is going to be is ominous.

Given the anticipated uptick in climate-migrants, what is the appropriate response?

HD: America has benefited so much from immigration. The country’s economic growth was fueled by these millions of people who considered it in their interest to work often hideous jobs, who within a generation had integrated and created fusion cultures that enriched American civic life. If the US behaves smartly, if it creates mechanisms so these people aren’t living in the shadows for generations, preventing them from making the contributions they can make, it could be an upbeat story in the end.

You wrote in a recent op-ed that “optimism should guide policy” when it comes to our borders? Is that what you meant?

CBT: The immigration system the US has, as confusing as it is, is a system we created. And if you make something you can unmake and reform it. The question is, does the country have the political will and the emotional will to tackle that big question. Immigrants have helped build this country and turn it into a marvelous place with marvelous experiences. This climate crisis and climate migration should be viewed as an opportunity to carry on in that path. And how do you do that? You set up systems that help those who come, that welcome them rather than reject them, and think about how we integrate these people.

Data show America’s essential work force is imploding. Do you see any evidence that this is affecting people’s views on immigration?

CBT: There is a historic push-pull on this issue. On the one hand there has always been a need for these newcomers in the American economy. But the other side of the equation is their arrival can at times really spike concern among some in the US that these newcomers are taking their jobs. This has become an even more important dynamic in the last few decades as we think about the growing centralization of wealth, and the stagnation of the working class. When the issue of jobs is placed on top of immigration, it makes for tricky politics, and it makes for very tricky answers to the question of who and how many people we should welcome.

Historically, that’s often been a very fraught question, hasn’t it? Who do we let in and on what basis?

HD: In the 1920s the US passed legislation that attempted to bureaucratize the flow of migrants into the country. It was a tremendous turning point in our history. Passed in 1921 on an emergency basis and finalized in 1924 the law set a ceiling on the number of immigrants allowed in and created a quota system on the basis on national origin. It gave power to US consular officials in other countries to grant visas and to decided who could come and who could not, and to separate the acceptable from the unacceptable. It was a horrendous reality for the Jews of Central Europe and for others who wanted to escape the war and had no place to go.

In your view is there a way to slow the flow of migrants while at the same time adopting a more humane immigration policy?

CBT: One of the things Biden has tried to do and Obama did this as well is they recognized that conditions in other countries… can be very bad. And so, what they tried to do was to send funding and aid to these countries and try to reconstruct them. And the problem is: that is a hard thing to do. You can’t change a country like Guatemala in two years. A lot of these countries around the world are the way they are because of economic forces the US has unleashed. It’s created a lot of wreckage and so to think about, how do you make it so folks in other parts of the world say to themselves, I can stay here. That involves really rethinking how the US acts in the world, and questioning choices the US has made.

How does Americans’ lived experience with immigration, with immigrants, differ from the policy and political rhetoric?

CBT: Data from Pew show something like 60% of Americans have a favorable view of immigration. They believe it makes America stronger. So, something is happening here. But the tension for many is in thinking about this individual experience and then thinking about the numbers, which are large. And they can’t navigate that gap. They might remember their own family members coming to this country … they may know an immigrant family that is part of their child’s sports team or church. But then there are the many hundreds of thousands or millions arriving, and that is the gap people struggle with, and struggle to make sense of in their own lives. That is the challenge that immigrant advocates have. How do you extend these individual experiences to the bigger picture.