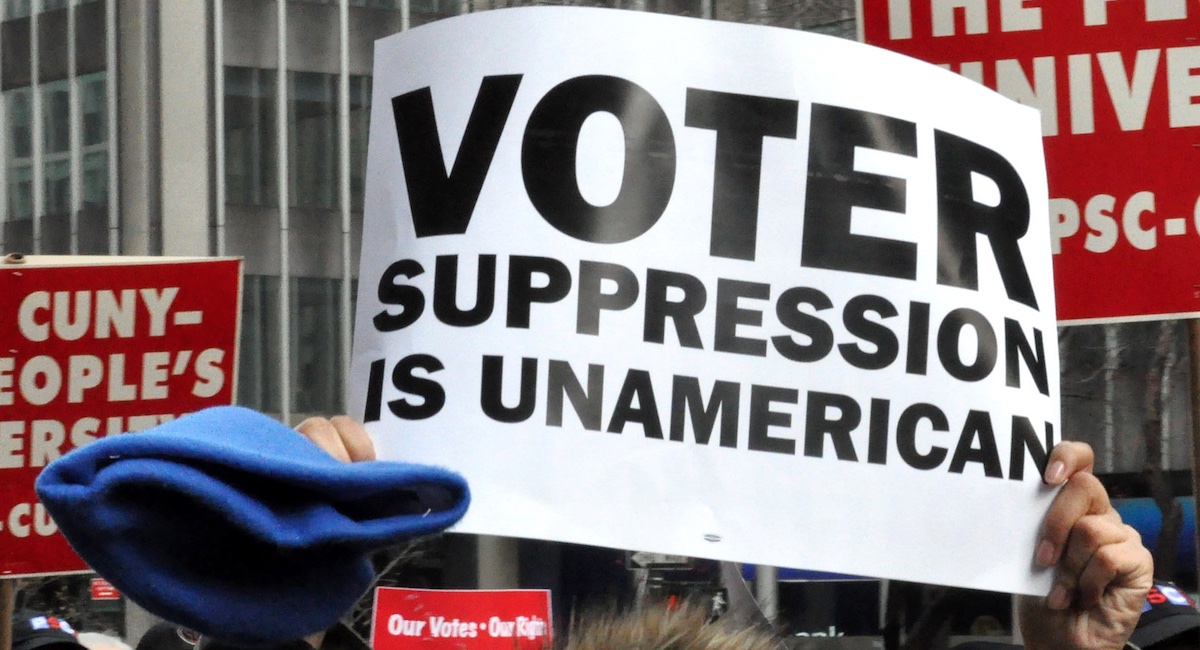 The Specter of Second-Class Citizenship By Khalil Abdullah

International Democracy Day came and went this year with barely a whisper, but a quartet of human rights and community advocates from Alabama and Louisiana took the opportunity to reflect on the challenges to achieving America’s promise of equity and fairness.

Among those challenges are the flurry of adverse rulings in redistricting cases soon to be heard by the U.S. Supreme Court.

First up on the docket is an October 4 hearing in Milligan v Merrill.  Alabama appealed to the Supreme Court after its state court ruled against newly drawn Congressional maps. The state court found those maps to be in violation of the Voting Rights Act as, if implemented, they would dilute the voting strength of African Americans, who account for 27 percent of the state’s population.

The Supreme Court has also agreed to hear Moore v Harper, a North Carolina case which may result in a landmark ruling that will determine whether state courts have the power to rescind or amend maps drawn by a state’s legislature.

Advocates at the Sept. 15 Democracy Day event spoke during a forum sponsored by Democracy Under Attack, Alabama Values, and Spotlight PR.

Event moderator and Spotlight PR Founder Jennifer Farmer pressed the participants to share their vision and prescriptive civic remedies to the anti-democratic trends now circulating within the lifeblood of America’s current political and legal discourse.

“I think there are things we can draw a lot of inspiration from internationally in terms of movements,” said Evan Milligan, executive director of Alabama Forward and the eponymous litigant in the October 4 case before the Supreme Court. “And this being a global day for democracy, there’s some amazing work going on.”

Though acknowledging the robust community organizing of his U.S.-based peers, Milligan also cited examples “on the continent of Africa, in the Congo, in Senegal. There are organizers there who really have their lives on the line just speaking out as far of freedom of speech and the right to vote; the right to hold corporations accountable for their impact on the environment.”

Milligan said there are opportunities to meet and learn from activists from other parts of the globe and that he personally resists internalizing the mantra that the struggle for a more equitable democracy in America is beyond attainment. “I look at things that give me inspiration,” he said, including the courage of African American ancestors who survived the repressive conditions in the South during Reconstruction.

Latitia Smith, who serves as Vice President of the NAACP’s Lee County, Alabama branch, was asked to share her views on the barriers to expanding civic engagement and the overall state of democracy in the United States?

“I agree that democracy is under attack,” Smith responded, and “I just see myself as someone who answered a call to serve.” Upon moving to Alabama, Smith said she sought an opportunity to become more engaged in community issues and connected with like-minded people in Opelika, Auburn, and Lee County who were having discussions about redistricting. “We really wanted to educate the people in our community.”

Put the information out there, educate people, hold their hand and make it personal and relevant to them so that they can understand… you’re not going to fight for something that doesn’t mean anything to you.”

Smith said to be successful, activists have to be engaged and visible within their communities. They have to show up at the park; at community events. Though the need to foster civic education is critical, she maintained that success, however measured, occurs only after mutual trust has been nurtured through personal connections.

“What I’m seeing down here in the community, there’s a lot of distrust, misinformation, disinformation, and people do not just understand what is at stake. Put the information out there, educate people, hold their hand and make it personal and relevant to them so that they can understand… you’re not going to fight for something that doesn’t mean anything to you.”

Carlos Pollard, Jr., a New Orleans native and former redistricting fellow at the Louisiana-based Power Coalition for Equity and Justice, spoke to the engagement of his Generation Z peers, by most metrics, those born after 1995, meaning the eldest among them are now in their mid to late 20s.

When asked whether civic awareness and community orientation were part of GenZ’s mindset, Pollard said, “I think they are very aware of threats to our democracy.”

He maintained that GenZ will find its own way of social activism and engagement, noting that SnapChat, Tiktok and other digital platforms of the social media universe will increasingly become part of the toolbox of community organizing around social justice issues.

Pollard embraces his identity as a social entrepreneur. He is now a first-year law student at Southern University School of Law, his personal mantra is “action over words, dreams over destiny, and community over everything.”

Ashley Shelton, the founder, president, and CEO of Power Coalition for Equity and Justice, where Pollard held his redistricting fellowship, said she sees the current post-Civil Rights Era as a time in which “we are experiencing a loss of rights over multiple generations.” Shelton said the resistance to a more equitable society is being driven by those who seek to contain the demographic shift to a majority minority country.

“Here we are 50 years later,” Shelton said, identifying herself as a Black woman, “watching the literal roll-back of work that our family members did to ensure that we would not be second-class citizens in our own country.”

Shelton spoke to the need for communities to grasp that securing the right to vote is relevant to every policy issue in the current political discourse, from reproductive rights, LGBQ rights, and criminal justice, as a few examples. “One of the things that I worry about is that we want to fix these problems one at a time instead of understanding that they’re all connected.”