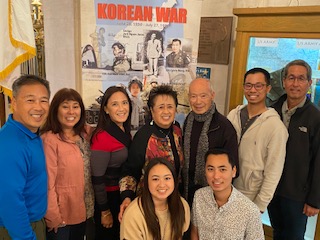 A very exciting exhibit was just been set up in Alameda at the Sea and Space Museum, the USS HORNET  and at the Veterans Memorial Building in San Francisco’s Van Ness Ave last week.  It honors the brave veterans who fought in the many wars the US has been a part of during the past century and gives attention finally to the many military personnel from California who fought for our country.

I got to visit the exhibit at the War Memorials Building in San Francisco this week and was welcomed by Helen Wong, who was there representing the veterans organization which is sponsoring the exhibit. The very extensive exhibit on Chinese veterans who had served in many wars interested my three generation family visiting with me, saying that nowhere in studying American history did they know of the extensive contribution Chinee American military personnel played in the different wars, so this is an exhibit needed to be shown all over the nation.  Set in a first floor niche of the War memorial Building in San Francisco, the exhibit will continue through mid June. 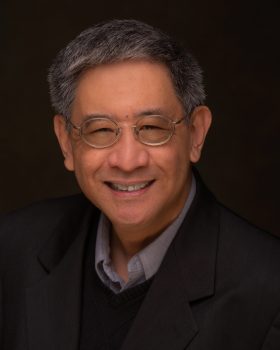 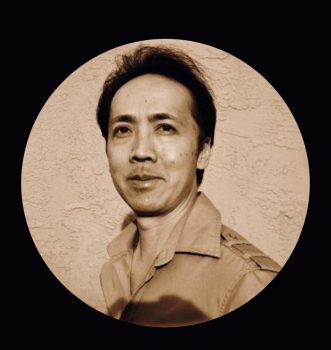 Montgomery Hom and Ron Chan, two passionate volunteers who truly believed in this project to honor Asian American veterans, put up these fine displays for our pleasure and was funded by many local non profit organizations in support.  Many of the vets who were in the photos they have collected and put into banners, have been thrilled to see their accomplishments shown off with attractive exhibits. 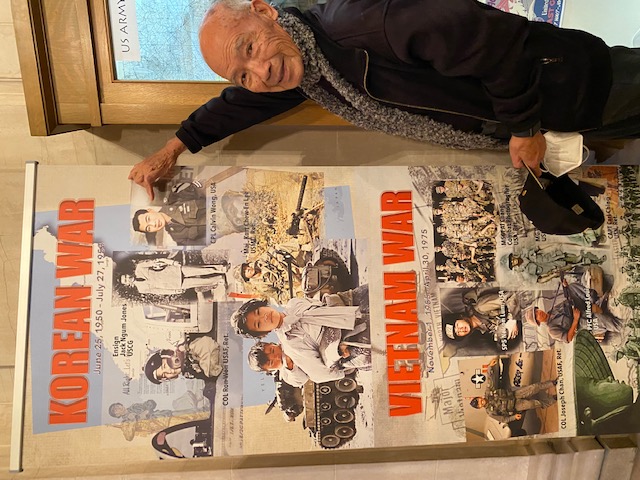 CAPTION:  Calvin Wong discovered himself on the banner of the Korean War and Vetnam War.

Even my Calvin, a Korean War veteran who honestly saw fighting in action, is featured on a banner of the Korean War.  Asked what was the impetus that started him collecting World War II memorabilia, Montgomery Hom replied,  “Chinese Americans have served in the United States military for over 150 years. Yet today, their stories are still not widely known.   “Chinatown to Battleground” is an exhibition for all to experience.  It is an homage to the men and women who served and sacrificed for our nation. Their stories are told through rich visuals and surviving objects which have never been seen in public before.”

Hom went to on to explain his collection’s value, saying “Every single object represents an individual from the Chinese community who served during a major conflict. Such as COL Won Loy Chan, US Army, WWII CBI Theatre, whose life was saved by a spare pistol magazine when a Japanese bullet hit it!  Or the oversized, not very flattering Army Air Forces flying suit issued to Margaret “Maggie” Gee, of the Women’s Air Force Service Pilots (WASP),” he said.   Hom continued on, explaining, “Some 200 objects help to tell a story which has been long overdue.  It also ensures that we will have a future home for the stories of our Chinese American veterans.  It is a small glimpse of some very important history for our present day America” he continued to explain his collecting of the WWII service artifacts which his new exhibit is sharing. 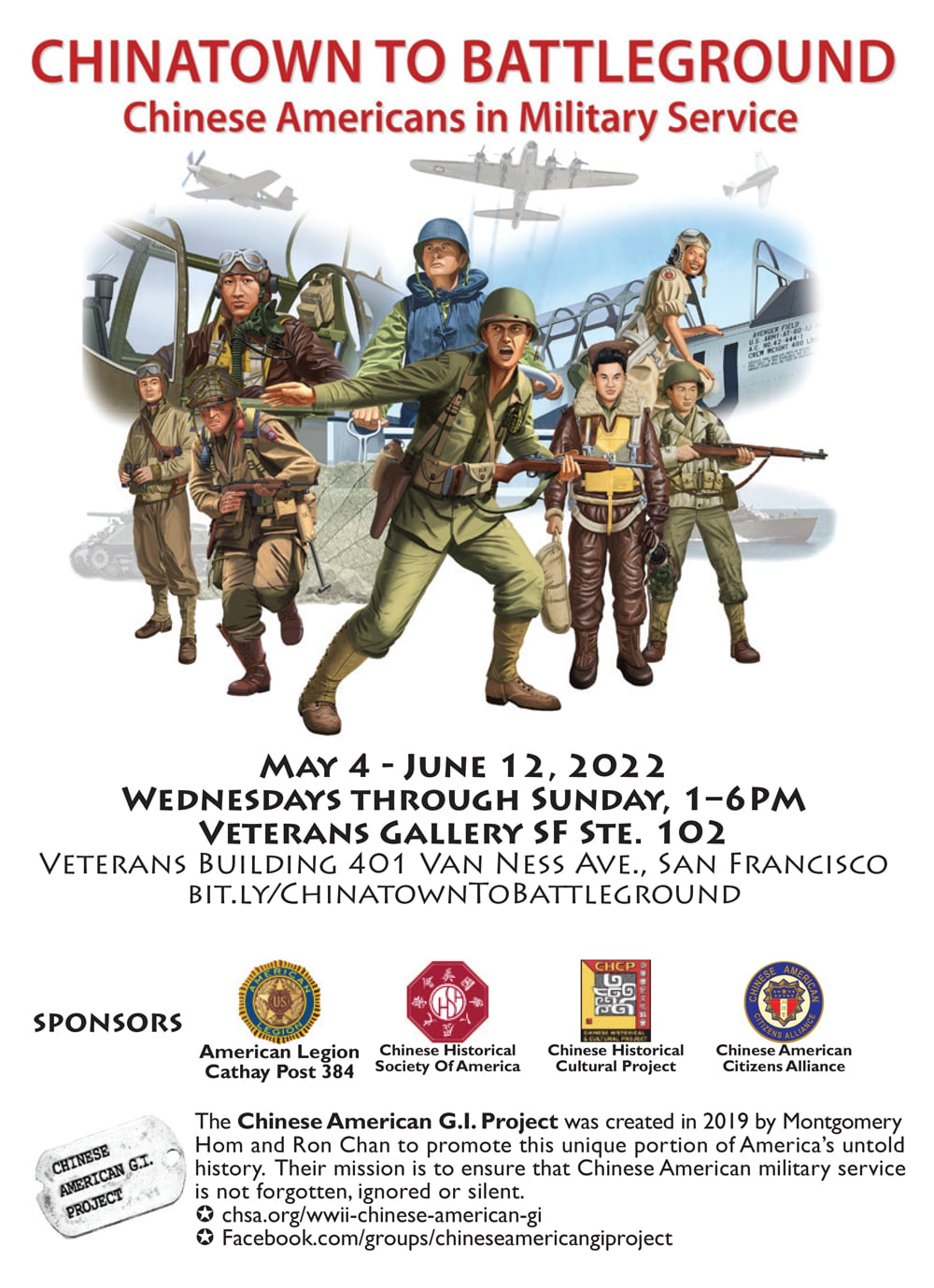 To celebrate Chinese American military service from the Civil War to Afghanistan, the American Legion Cathay Post 384 and the Chinese Historical Society of America (CHSA), are sponsoring the national debut of the exhibition “Chinatown To Battleground”. The exhibition is designed and deployed by Montgomery Hom and Ron Chan, Co-Founders of the “Chinese American GI Project”. 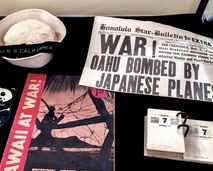 There will be over 200 personal military artifacts from Hom’s personal collection. Custom designed banners and multimedia elements will showcase how Chinese Americans fought in every theatre of war and proudly served in every branch of the armed forces.   The exhibit banners will cover Chinese American service from the Civil War to present day, specifically Civil War where Chinese fought on both the confederate and Union Side. Other banners will include photos of the Spanish American War, WWI, WWII, Korean, Vietnam, Iraq and Afghanistan.  In addition there will be banners of Chinese American women in the military on the front, and women on the home front such as the USO, during drives to promote war bonds and working in the factories and shipyards. 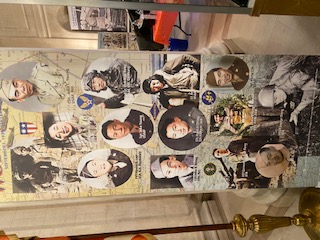 The exhibition will debut in San Francisco at the Veterans Building, Veterans Gallery Room 102, at 401 Van Ness Avenue from May 4 – June 12, 2022.    Concurrently, the USS Hornet, Sea and Space Museum in Alameda, CA, features elements of the exhibition for AAPI month.  This Chinese American Veterans exhibit joins programs from the Japanese and Filipino American Veterans community from May 1 – May 9, 2022.    The “Chinatown to Battleground” exhibition will then make its Silicon Valley/ South Bay debut during summer 2022 . The exhibit is sponsored by the Chinese Historical Cultural Project (CHCP) / Chinese American Historical Museum (CAHM). CHCP’s film and oral history project, “War and Remembrance” will also be a part of the exhibition. David Yick, board president says “We want to recognize Chinese Americans as part of the fabric of America and highlight our military service accomplishments and patriotism. This exhibition integrates well with our film project and provides great synergies in building a better museum experience for our members and visitors. It is a great addition to CHCP’s recognition of Chinese American contributions to medicine, science, engineering and business.” 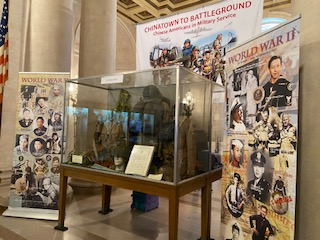 Future plan include this presentation to be a traveling exhibit that will go on a national tour after this debut in San Francisco, Alameda, and then a summer Silicon Valley launch at Chinese Historical and Cultural Project’s program  at History San Jose park this  summer.  To further awaken your interest and entice you to venture to the exhibits currently opened  here, catch this  90 seconds video on the exhibit – https://www.youtube.com/watch?v=gbmacKn7OLs. At the exhibit site will be  shown a book that Montgomery authored about the military individuals.  For purchase info, you can embed the following link … https://shop-chsa.square.site/product/fighting-on-all-fronts-profiles-of-wwii-chinese-americans-from-the-golden-state/623?cp=true&sa=false&sbp=false&q=false&category_id=14

The book , called  Fighting On All Fronts, Profiles of WWII Chinese Americans From the Golden State not only includes heartfelt tributes to our Greatest Generation, but it is also unique in its field as nearly half of this book is full of new original content. Every page has been custom designed to give it a “coffee table” visual experience. Book Highlights 238 full color pages 150+ heartfelt tributes 100+ historical individuals showcased 100+ pages of new original authored content  As Chan and Hom’s work on the exhibit has been all volunteer and funding is definitely needed to cover the costs of establishing new sites to share it with. “Donations are always eagerly accepted the QR code attached and scan the code and it will take you to the site to order. or you can embed the following link … https://shop-chsa.square.site/product/fighting-on-all-fronts-profiles-of-wwii-chinese-americans-from-the-golden-state/623?cp=true&sa=false&sbp=false&q=false&category_id=14 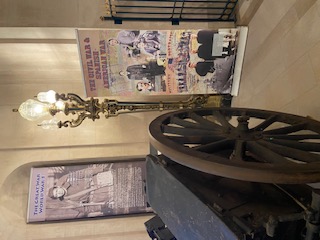 Of course with any non profit organization’s work and the dedication of the two presenters, there is always cost involved.  Your help in promoting this project to travel and perhaps come to your city  is always welcome and following is the link  to donate online    https://shop-chsa.square.site/product/donation-to-operation-wwii-chinese-american-g-i-/626?cp=true&sa=false&sbp=false&q=false&category_id=14

Although the average person traveling to Honolulu is looking for beautiful blue  warm waves of the Pacific ocean along with pleasant trade winds , there are many other sights to enjoy in Hawaii. I found last week while on the paradise isle of  Oahu a special spot I want to share with you. .  Recently reopened to visitors of the general public, the SHANGRI LA MUSEUM OF ISLAMIC ART, CULTURE & DESIGN was a highlight of my latest trip.  A new self-guided tour experience was unveiled recently with the museum’s latest exhibition space, the Qujar Gallery. 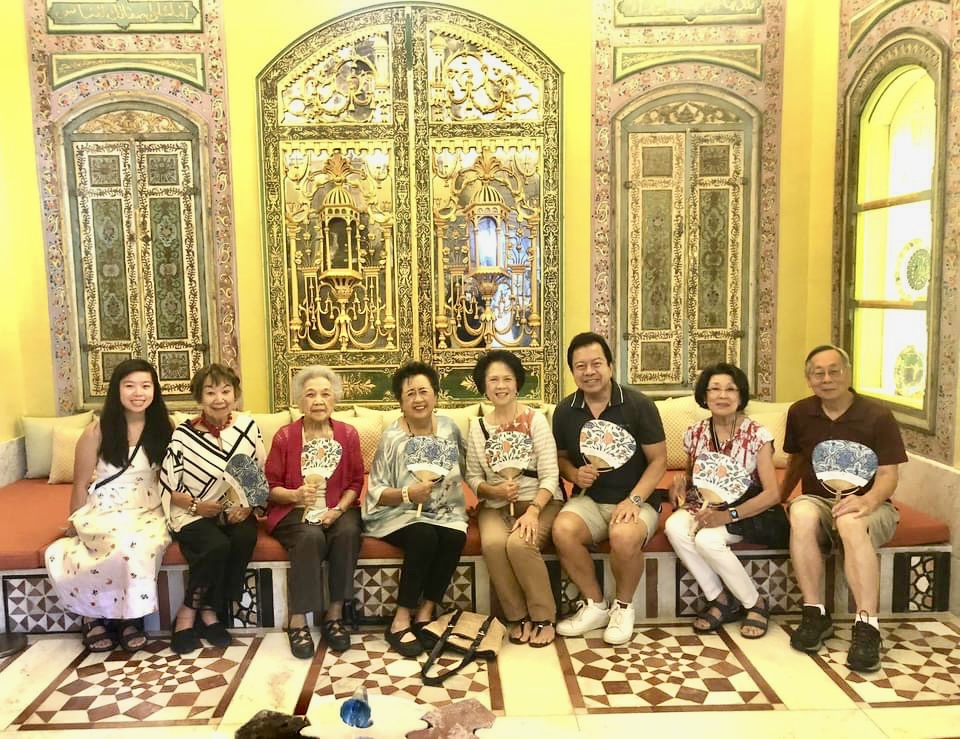 The reopening, which was enjoyed by TV newscaster Rick Quan with his visiting mother and family from Houston, Texas, as well as by us Californians Myrna Wong, Katie Chin and Dali Jones, included seeing a new gallery which  showcased a rare collection of works from the Qujar Empire of Iran during the 18th and 19th centuries. As Curator of Collections and Exhibitions, Dr. Leslee Michelsen said, “Doris Duke was foresighted in her interest and appreciation of the Qutar era as art from this period was rarely collected in the 20th century.” 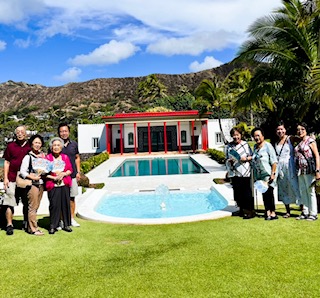 Following a honeymoon trip which took Doris Duke and James Cromwell to the Middle east, and concluding in Honolulu in the 1930s, Duke was so captivated by life in Hawaii and the cultures she had encountered during her travels, she elected to build a home on an ocean front piece of property and build it in the theme of the Middle East.  Shangri La is the result and is a place everyone should try to take time to visit to see how Doris Duke used her wealth and interest to produce this fine property. 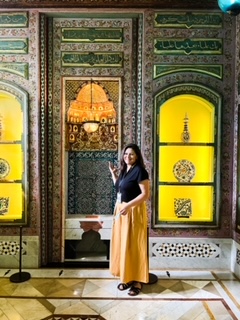 The beautiful sight of the ocean front scenery as seen from Duke’s dining room is spectacular. As Communication & Special Projects Director Giovonni Parks told us, “Of all the beautiful places within the museum, my personal favorite area of the museum is the Upper Lawn where I love the unobstructed view of both the ocean and Diamond Head Crater.” He added feeling grateful that Doris Duke directed in her will that Shangri La be “available to scholars, students and others interested in the furtherance and preservation if Islamic art and make the premises open to the public.” 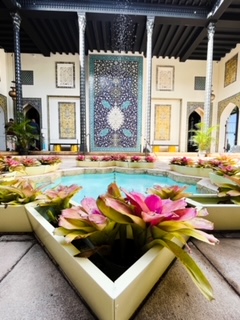 In 2002, Shangri La opened as the only museum dedicated exclusively to Islamic art in the United States and is operated by the Doris Duke Foundation for Islamic Art, one of Doris Duke philanthropies. It has become a much chosen destination for visitors as only up to 1200 persons are admitted per month due to it being in a residential area. Shuttles bring visitors from the Honolulu Museum of Art where tickets can be obtained.  Every piece of the property has spectacular pieces of Moorish art and architecture to enjoy. For information on tours including  a virtual tour of the property, sehttp://www.changrilahawaii.org/Programs/Tours/

You will not be disappointed to see pieces of Moorish history never seen before.