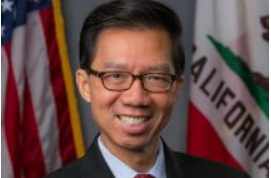 A 2017 study by Yale University found that even though Asian American and Pacific Islanders were well represented among the nation’s attorneys, the AAPI community is often absent from some serving in some of the highest posts. Specifically, only 26 active Asian American judges were serving among the more than 850 federal judicial positions, and only 2% of the roughly 10,300 state trial and appellate court judges identified as Asian American. The study also found that a relatively small percentage of AAPI attorneys had a parent with the same career, which can often make it harder to advance in a legal career.

Assemblymember Chau will help expand opportunities for future AAPI legal professionals. He has been serving the AAPI community in Los Angeles since he was in high school by volunteering at the Chinatown Service Center (CSC), a federally qualified health care center located in Los Angeles County. During his time as an Assemblymember, he has fought to improve the lives of all AAPI people and increase funding for organizations such as the CSC. As a valued member of our community and Caucus, we look forward to his continued efforts to uphold equity and justice for all as he becomes a Superior Court Judge.

“We are proud to congratulate Assemblymember Ed Chau for his judicial appointment to the Los Angeles Superior Court and for increasing much needed AAPI representation in our state courts,” said Senator Richard Pan (D-Sacramento), Chair of the AAPI Legislative Caucus. “I have had the pleasure to serve with Assemblymember Chau and have seen first-hand his work to protect our seniors, secure our online privacy, and advocate for our AAPI communities. As Judge, we are confident Assemblymember Chau will continue to fight for underserved communities and protect our rights.”

“I want to congratulate Ed Chau on his well-deserved appointment to serve as a Los Angeles County Superior Court judge,” said Assemblymember Evan Low (D-Silicon Valley), Vice Chair of the AAPI Legislative Caucus. “I’ve had the honor to serve alongside Ed for the last seven years and during that time I’ve been consistently impressed with his legal acumen and commitment to improving the lives of all Californians. We will miss his leadership in the AAPI Legislative Caucus, but I have no doubt his dedication to doing the people’s work will continue for many years to come.”