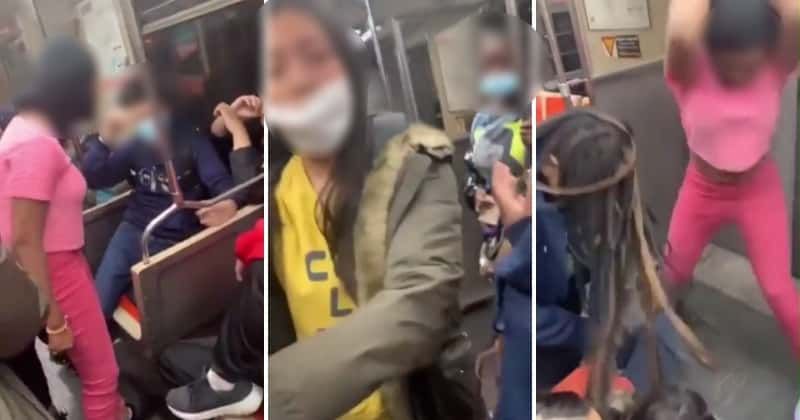 The incident that police confirmed was ‘based on ethnicity’ occurred when the victims, students of Central High School, were going home on the subway

PHILADELPHIA, PENNSYLVANIA: A disturbing video has emerged showing teen girls brutally attacking high school students of Asian descent on a SEPTA train in Philadelphia, Pennsylvania. Police have confirmed the attack was “based on ethnicity.”

The Asian students from Central High School were headed home after class around 3.30 pm on Wednesday, November 17, on the Broad Street Line subway. Footage from the scene saw a group of teen girls verbally abusing some of the Asian kids, hurling obscenities. One of the girls even punched one of the Asian boys. When a female student of Asian descent attempted to intervene, she became the target of the assault. She was punched, slammed against the side of the locomotive, and thrown to the floor. The attackers mercilessly pummeled and stomped on her, while one of the suspects battered the victim with her shoe repeatedly. The victim was rushed to the hospital for her injuries, the Blaze reported.

A SEPTA spokesperson described the incident as “violent and disturbing,” while SEPTA Police Chief Thomas Nestel confirmed that all of the victims in the “unprovoked” attack are Asian and all of the suspects were African-American. “This was an attack based on ethnicity and ethnic slurs were used by the attackers,” Nestel said Thursday afternoon. “She was a hero,” Nestel said of the female victim who tried to intervene. “She stepped up and told the girls to stop saying what they were saying. She then became a target. Just truly heroic, courageous.”

Authorities said the four female suspects were between the ages of 13 and 16. They are likely to face charges of ethnic intimidation, aggravated assault, simple assault, recklessly endangering another person, and terroristic threats.

“My daughter and her group were the full aggressors,” the woman told NBC10 on condition of anonymity. “If the Asian children did anything, I would think that it was to protect themselves and that’s just what I got from the video.” She apologized to the victims and called her daughter’s actions inexcusable. “We’re all apologetic,” the girl’s mother said. “We are embarrassed, ashamed. It’s not who we represent.” She revealed that her daughter had been missing for two weeks after running away from home until she was placed in custody on Wednesday.

Meanwhile, a group of Asian American parents raised concerns with the principal of Central High School on Wednesday. “They rely on the subway to go to school and come back from school,” parent Mei Liu told CBS Philly. “because that’s their only transportation.”

Philadelphia City Councilman David Oh responded to the video by calling on SEPTA and the Philadelphia School District to increase security measures. “There has to be a response by the police, by SEPTA school safety officers, formerly known as school police, and by SEPTA itself,” Oh said. “It has a police force and we need to see them.”

Chief Nestel announced that they were now offering students at Central High School a safe ride home with a police officer in light of the attack. “The benefit of this is the officer can start to get to know the kids because we’ll have the same officer there and we’ll have an officer on a train full of kids that’s coming from Central and going to South Philly,” he said. “That starts today.” The designated officer will meet with students at SEPTA’s Olney station each day, Nestel added.