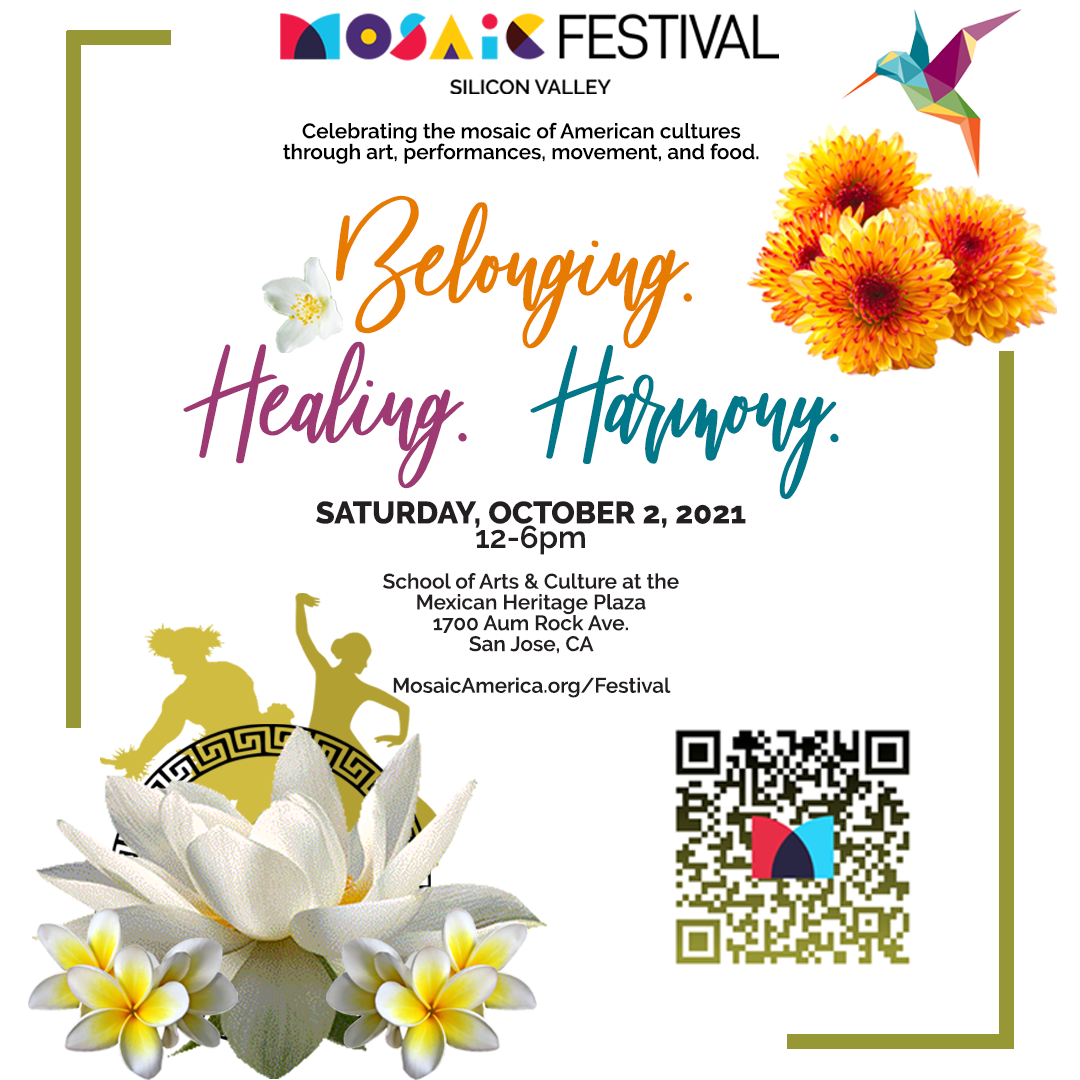 The first festival celebrating culturally-distinct communities within and around San Jose brings over 50 partners from culture-bearers to tech giants.

September 1, 2021 (Silicon Valley, Calif.) – Mosaic America, the Silicon Valley nonprofit organizer of the Mosaic Festival announced that its new date has been set for Saturday, October 2, 2021. From 12:00 noon to 6:00pm, it will be programming a day of art, performance, food, and workshops, celebrating and honoring the culturally distinct communities that represent San Jose and Silicon Valley.

Last week, the organization received word that its partner,  the School of Arts & Culture at the Mexican Heritage Plaza in East San Jose, received an unprecedented opportunity yielding significant benefits to the local community, which resulted in a date shift.

“We are eager to host MOSAIC on October 2 and look forward to sharing memories of the day with one of our core community engagement partners. We know that this new date will not compromise the beautiful art-making and relationship-building that has become the hallmark of Mosaic events,” says Jessica Paz-Cedillos, Executive Director of the School of Arts & Culture at the Mexican Heritage Plaza. “We thank MOSAIC’s leadership for their flexibility and understanding as we seek to meet the needs of our creative and local communities.”

The Mosaic Festival is also co-presenting an art exhibit with Works/San José and the School of Arts & Culture. “An American Mosaic” will feature the works of twelve artists from within and around San Jose, beginning September 10th through October 3rd at the Gallery of the Mexican Heritage Plaza. The exhibit is curated by Joe Miller.

“We are proud to present so many communities, artists, and culture-bearers that make Silicon Valley a beacon to the world, not only in tech but also in diversity and belonging,” says Usha Srinivasan, CEO & Co-founder of Mosaic America. “Our new date is our commitment made manifest to the well-being and betterment of our community. A rising tide lifts all boats.”

Mosaic is a nonprofit organization that strengthens communities, cultivates belonging, and catalyzes inclusion through inter-cultural and co-created art. Our team of artists uses inspiration from their cultures and art forms to collaborate on unique performances and expressions that highlight the common threads of our shared American story. 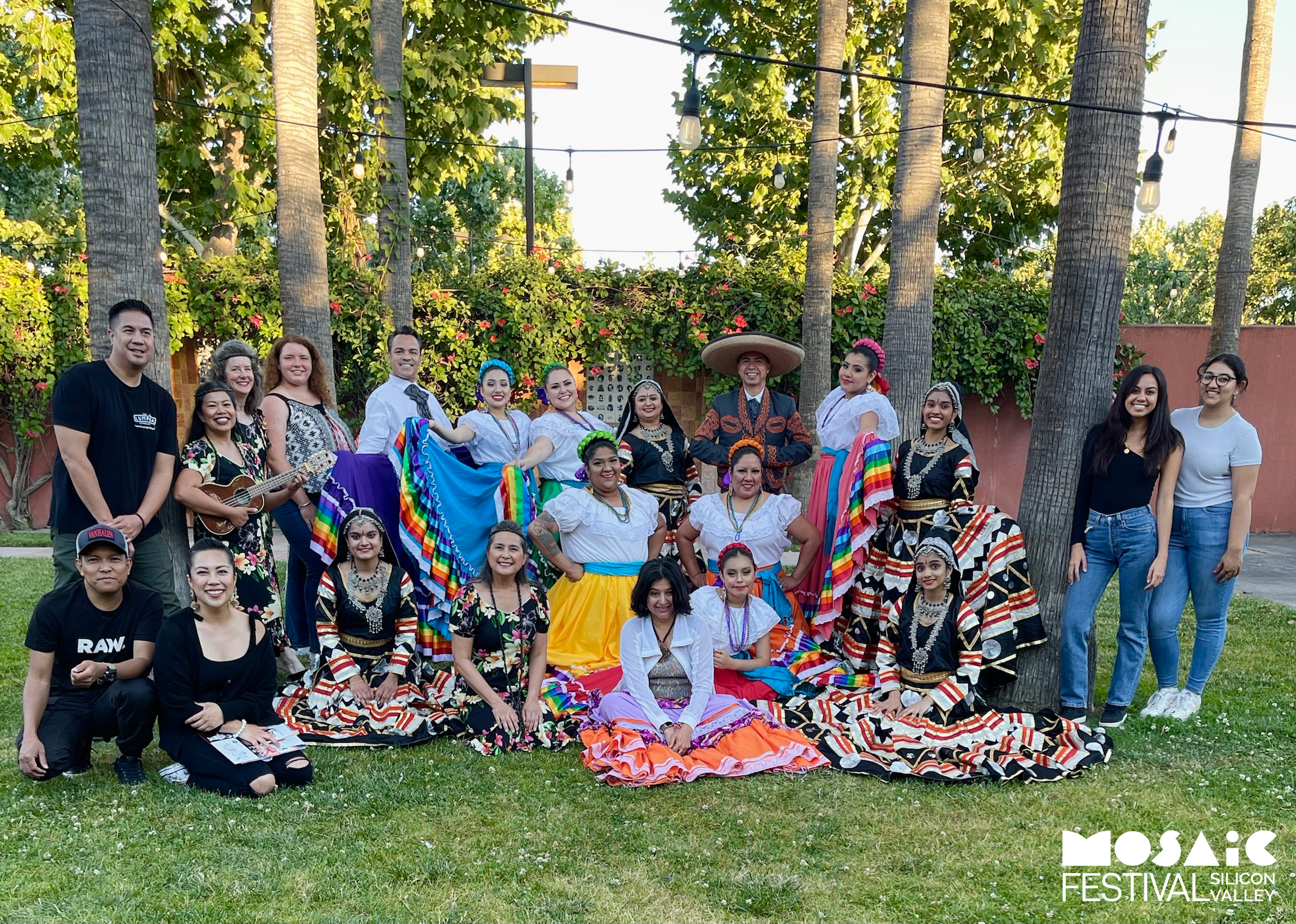 About the School of Arts and Culture at MHP

The School of Arts & Culture at MHP (SOAC) is a vibrant, cultural institution in East San Jose. Founded in 2011, the SOAC activates a vital local asset – the Mexican Heritage Plaza (La Plaza); a 6-acre, City-owned facility with an expansive plaza and theatre. Annually, we host over 70,000 people. Through our core programming, we uplift our community’s heritage through authentic placemaking and relevant multicultural productions. Our mission is to catalyze creativity and empower community.

Caption: New Ballet is set to perform at the Mosaic Festival on October 2, 2021. Visit MosaicAmerica.org/Festival for more details and full lineup of performances.