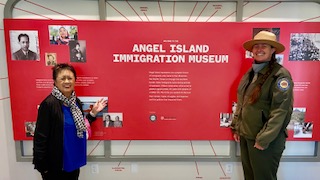 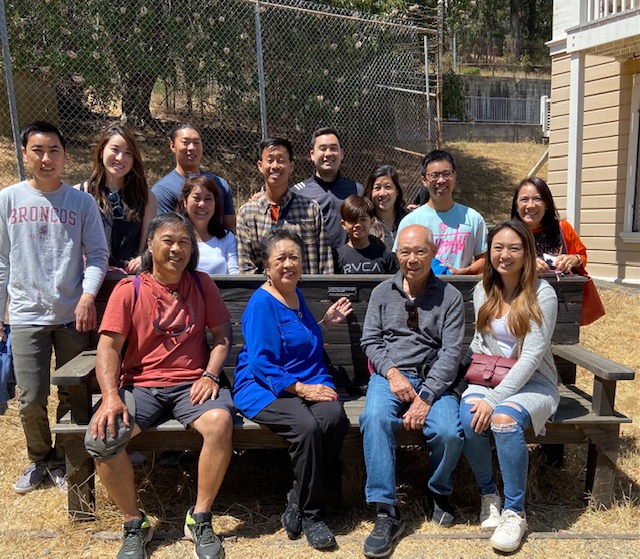 Our Wong family had a wonderful adventure when we took a specially organized tour of the new ANGEL ISLAND IMMIGRATION MUSEUM (AIIM). Not opened to the public as of this writing, our tour was a special privilege given to donors to the ANGEL ISLAND IMMIGRATION STATION FOUNDATION virtual fundraising event of 2020.   For donors of that event, the incentive gift for one’s support was a prize of a special tour of the AIIM, which included Ferry tickets, boxed lunch, shuttle service from pier to AIIM and a docent led tour by one of the AIISF staff or  volunteers.   Our 14 member family, ranging in age from 10 to 91, felt like VIPs as soon as we arrived to the Island to be met by Russell Naumann and California State Ranger Corey Lee, and quickly whisked by efficient outdoor shuttle to the Immigration Station. 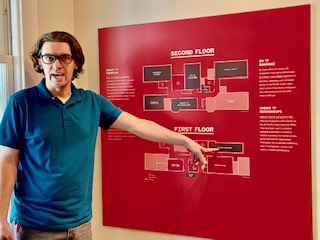 As this was a first time visit for many, as Russell led us up the path to the old hospital building, he told the group that in 2000, California voters approved a state bond measure of $15 million to rehabilitate the Angel Island Immigration Station. Starting in 2002, work started on the immigration barracks and the location of the former administration building. 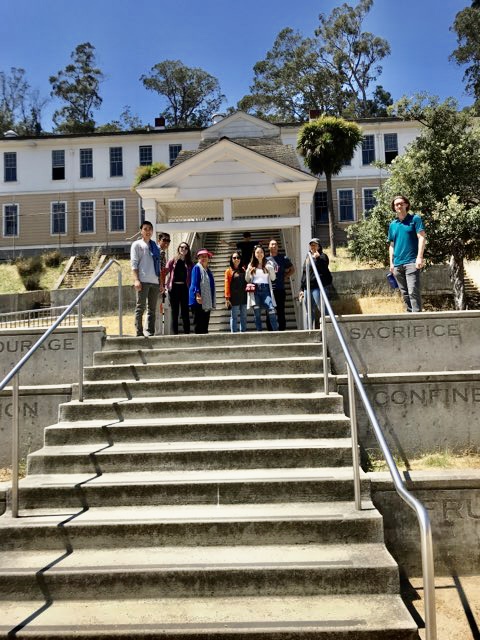 Visiting the Barracks building where all of the detained immigrants lived during their interrogation periods.

The grand opening of the restored Barracks building of the Immigration Station was held in 2009, welcoming over 1500 attendees. The AIISF Board then recognized that the old hospital building that served theill  detained immigrants, was a perfect location for a future museum. The group were elated when President George W,. Bush signed the Angel Island Immigration Station Hospital Preservation and Restoration Act which authorized up to $15 million to be allocated towards saving the 100 year old hospital structure. 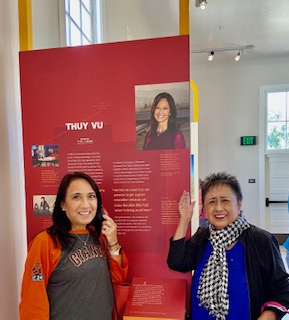 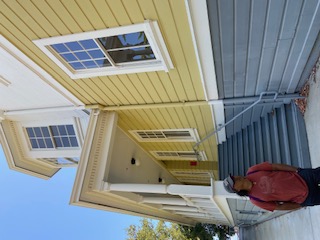 Additional funds, raised at annual Benefit events allowed for the full exterior and interior rehabilitation and the installation of selected intrastructure . Moving forward, an interpretation plan was approved in 2012 and became the roadmap for the future public visits to the hospital.A discovered map of the building from 1912, showed how the U.S. Public Health Service used the second floor rooms during the immigration period from 1910-1940. Russell told us, “Patients were separated into 5 different wards. These included European men, European Women, Asian women, Japanese and Chinese men. Construction ended in late 2019 while at the same time AIISF, the California State PARKS, and design company Second Story were curating the content for the museum. It took over a year of collaboration to determine which stories would be featured and to design the panels for the different galleries.” 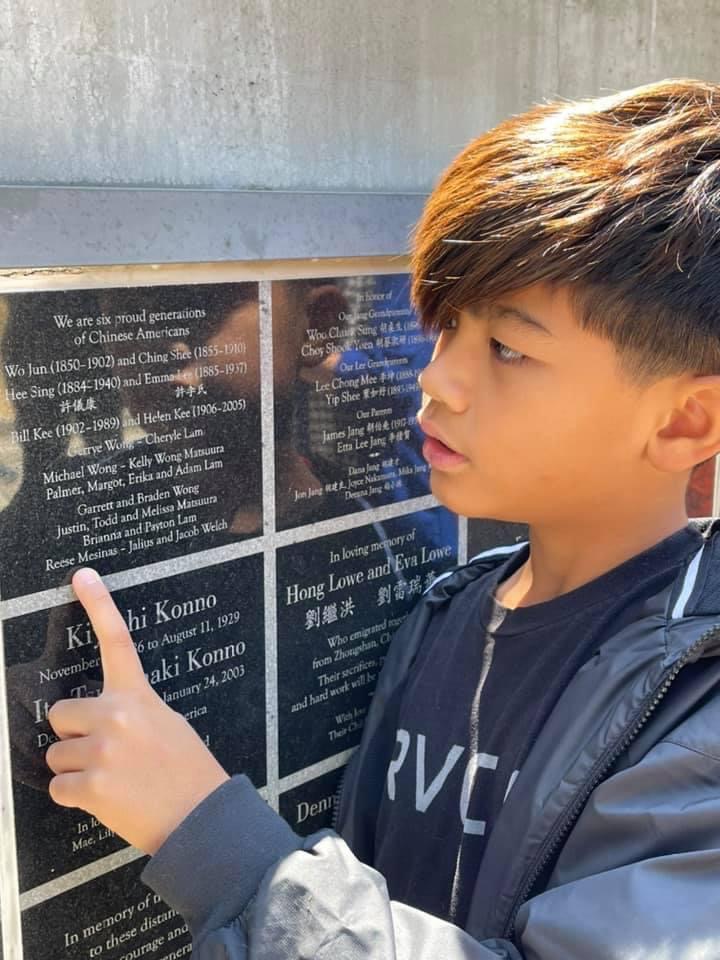 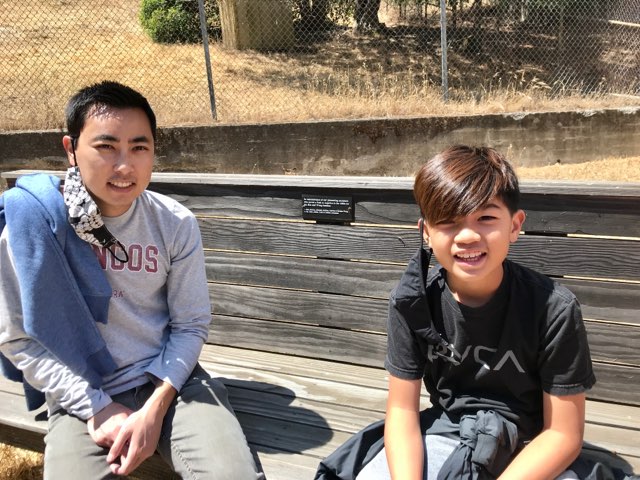 Other area of interest to the grandchildren was the black granite glistening Heritage Wall where they saw our block giving the names in honor of our California pioneers from 1860s to now. Ten year old Reese Medinas pointed proudly when he saw his name on my Kee family block, showing  my paternal lineage where four generation of names were heralded. They fell silent when seeing the large brass bell that stood at the mouth of the original entry where immigrants were dropped off and suffered humiliating physical exams and indignities before being led to poorly arranged cramped quarters of the barracks. Many spent endless months and even years before being allowed to enter the San Francisco port  or being forced to return to China or the country they emigrated from. To the younger members of my family, it brought home the immigration problems so many of our early generation individuals faced in trying to come to America. 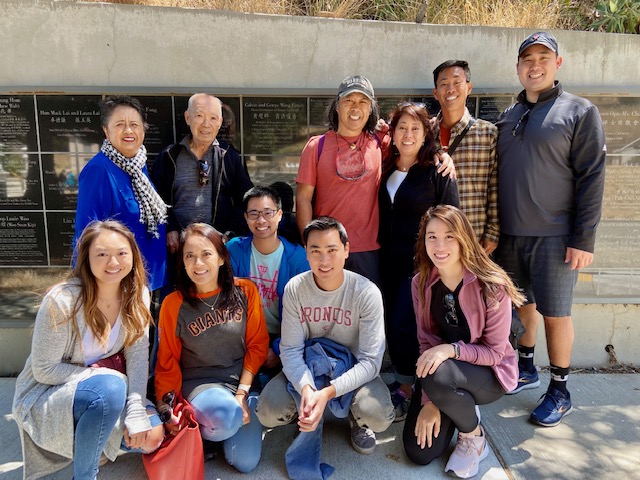 When the AIIM opens to the public, be sure to take a beautiful ferry ride to Angel Island, and see the informative exhibits of the old hospital which has become a wonderful trove of Asian American history. Or better still, contact the Angel Island Immigration station Foundation office and join their cause by being a member, donating well needed funds, or join the volunteer docent program to greet and meet Angel Island visitors who know nothing or very little of our proud but sad treatment  Chinese Americans suffered during those Immigration station years . Contact Director Edward Tepporn – etepporn@aiosf.org. If, in the meantime, you are interested in contributing to the future of the museum, please join me in making a donation to AIISF by sponsoring a bench or a new hospital exhibit  to help the group realize the full potential of educating visitors at the Angel Island Immigration station.

History San Jose’s annual SPIRIT OF ’45 LIVING HISTORY DAY is always a festive occasion where hundreds of San Jose citizens come to herald and remember World War II.  In the outdoor plaza, many exhibits are set up of army tents, gunnery used, and examples of WWII army life in those years of 1941-45.   Music of that era is played with lively jitterbugging by costumed dancers bringing merriment to the day. 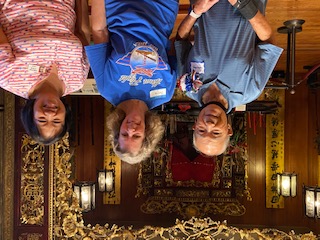 The CHINESE HISTORICAL AND CULTURAL PROJECT premiered its movie project, OUR STORY OF WAR AND REMEMBRANCE: CHINESE AMERICAN WWII VETERANS OF THE CHINA-BURMA-INDIA THEATRE (CBI).  For the past year, CHCP Board members and its Student Ambassadors, which are high school student volunteers, worked on the production of this over 30 minute film. Through interviews, the CHCP film project team of students and adults told the stories of four Chinese American veterans from the San Francisco Bay Area. Three were veterans of the Fourteenth Air Force, also known as the Flying Tigers and this could be the first time their stories appeared together. 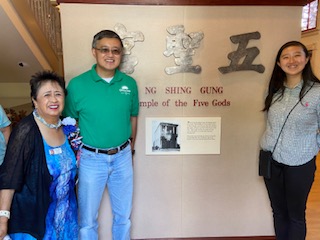 Film producers, Brenda Wong and Teddy Sue along with film Directors Min Zhou, Steve Gilbert and Mike Bushell, created the film to educate others about the rarely told story of Chinese American veterans of the CBI during a program held in HSJ’s Firehouse during the afternoon’s activity. 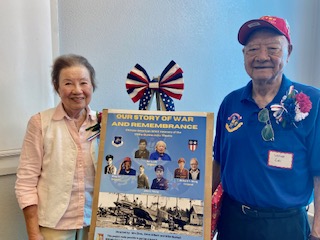 As the instigator of the program, Brenda Wong explained, “Our film, and today’s presentation is to honor, celebrate and preserve the legacy of patriotism, sacrifice, valor and contributions of the 20,000 Chinese American WWII veterans who fought on all fronts of the war conflict. They represented over 25% of the 77,000 Chinese people living in the United States at that time.  One must realize that at that time,  those born in China were denied citizenship, faced discrimination and challenges to owning property, voting and other American rights.  In spite of these barriers that faced Chinese Americans based on discrimination and racism, these 20,000 Chinese American men and women answered the call to serve.” 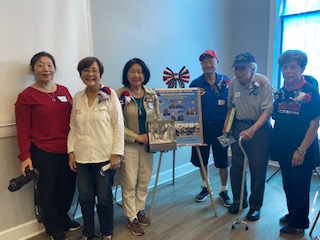 Featured in the film, army veterans Wing Lai and Harry Lim attended the premiere showing with their families and friends, and were warmly thanked for their service by the admiring audience members. In the film, Wing told of growing up isolated in San Francisco Chinatown, so when drafted at age 18 following high school, it was a frightening experience his first time away from home.  The film’s interviews told their harrowing lives in the service during those uncertain China war years against the Japanese. 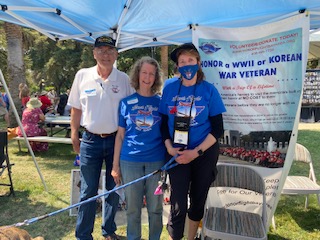 In addition to heralding the history of these WWII veterans in the movie and acknowledging of all those involved in its making, Student Docent Cultural Ambassadors (SDCAP) were presented with certificates of merit for their hard work serving as docents in the CHINESE AMERICAN HISTORICAL MUSEUM as well as volunteering for other CHCP projects, such as the recent film making. A very appropriate gift of appreciation to film donors was small American flag pins 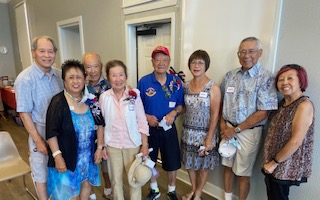 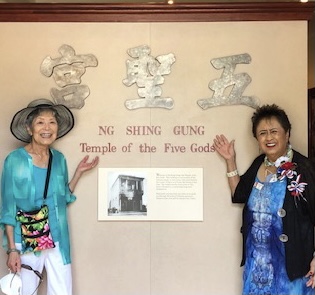 I’m so happy to see that theaters are opening up for live entertainment once again and that they are doing so with safety precautions also.  SUNNYVALE COMMUNITY PLAYERS announces they are thrilled to celebrate the return of in-person performances with WEST SIDE STORY, one of the best loved musicals of all time. Though written for the 1950s, the show still remains as timeless as it did when it first premiered and as director Thomas Times said, “And dare I say, the world of 2021 needs West Side Story more than ever before.”  Shows begin on Saturday, September 11 and runs through October 3, with all performances taking place at the Sunnyvale theatre at the Sunnyvale Community Center.  I like the fact that the company announces that all patrons must be fully vaccinated and will be asked to provide proof of vaccination in order to enter theater and all patrons are also required to wear masks at all times inside the theater.  So let’s join in and support local theater which is finally coming back for our enjoyment.  Sunnyvaleplayers.org or 408 475 1198 for ticket information.