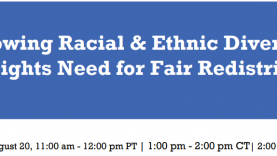 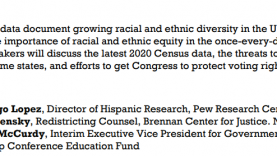 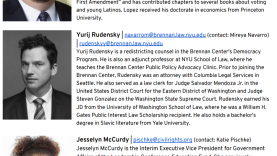 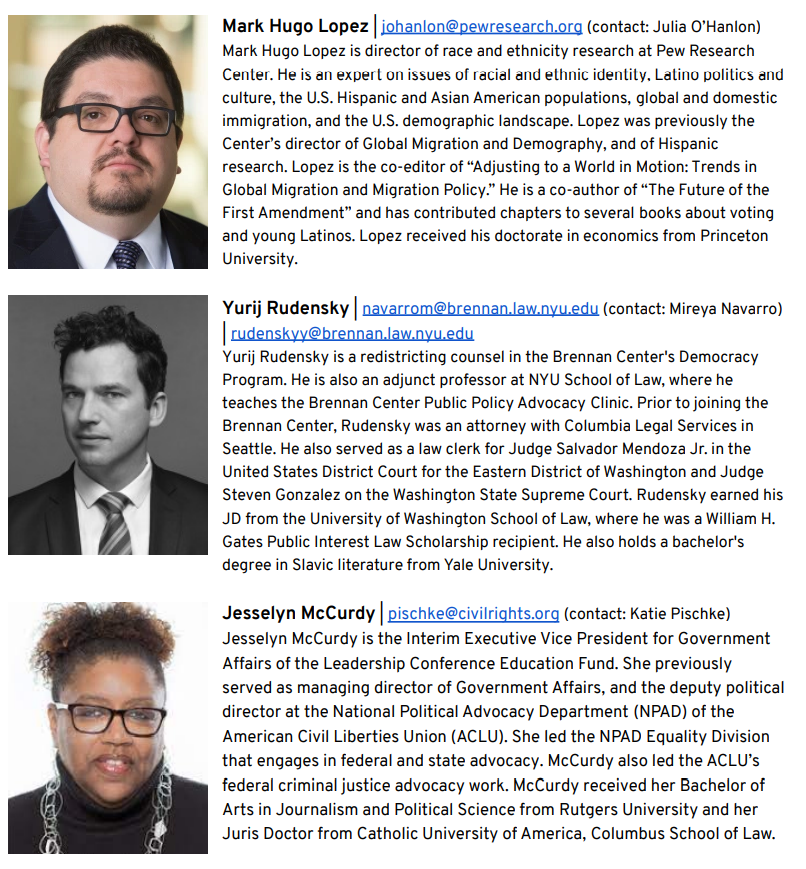 As minorities grow, their representation relies on redistricting

The census results revealed the growth of minority groups that make up almost 40% of the country’s population. Today there are 5 million fewer white Caucasians than in 2010.

The 2020 Census count shows what demographers have been anticipating in recent years: The United States is an increasingly diverse nation with minorities growing rapidly in comparison to white Caucasians. At the same time, efforts to restrict the electoral rights of these minorities are advancing in at least 22 state legislatures while redistricting, based on census data, has galvanized activists across the country to push for equal representation.

Experts convened by EMS and the Leadership Conference on Civil and Human Rights analyzed the challenge that the growing racial and ethnic diversity in the country represents for the drawing of electoral districts, as well as the status of two bills in Congress to guarantee the right to vote.

“Non-Hispanic, white Americans made up 58% of the nation’s population,” said Mark Hugo Lopez, Director of Hispanic Research at the nonpartisan Pew Research Center. “That is the lowest share that we’ve seen for white non-Hispanic in the United States, ever.”

“The nation has steadily changed over the course of the last five decades,” Lopez said. “The big story here is that there are about 5 million fewer White Americans… 32 states saw their populations rise, but within those states, the White non-Hispanic population fell… their populations became more diverse.” Meanwhile, the number of Americans who said they are of two or more races also increased (34 million).

“The other story these numbers show us is that rural places lost people, while urban and suburban counties gained people,” added Lopez.

Based on these data, political boundaries will be redrawn at the national, state, and local levels over the next several months. Districts will adjust to reflect the demographic changes that have occurred so that growing Black, Latino, Asian and Native communities that have historically faced discrimination, have an equal opportunity to elect their preferred candidate.

“When one political party is in control of this process, it can be used in a way to disadvantage the political opposition,” said Yurij Rudensky, Redistricting Counsel at the Brennan Center for Justice at NYU Law School. ”

Gerrymandering is the common term for these redistricting abuses … The goal is to lock in an electoral advantage for a party, but there are also racial gerrymanders to minimize the political influence of voters of color,” added Rudensky. “In many states, these two abuses go hand in hand.”

According to Rudensky there are three solutions to gerrymandering. One is to give control over this task to an independent redistricting commission, made up of Democratic, Republican, and independent representatives who are not lobbyists, politicians, or campaigners.

A second solution is making sure that there are powerful safeguards and legal tools that advocates can use in court to police redistricting. And a third tool is that more people get involved in drawing these maps so that political operatives “don’t do their work behind closed doors.”

“The newest threat to the growing political power of these communities is an attempt by right-wing forces to no longer have states count all people when districts are drawn, but instead count only those who are adult citizens,” Rudensky explained. This means that children under the age of 18 and non-citizens would no longer count for representation purposes.

“This is a very dangerous new idea that would harm communities of color… The good news is that most states have laws that require everyone to be counted. The second bit of good news is that states don’t have the necessary data to do this because the 2020 Census does not include citizenship data.”

Among the safeguards to monitor redistricting are two bills currently in Congress: For the People Act (S1), and the John L. Lewis Voting Rights Advancement Act, both with strong bipartisan support, aim to counterbalance voter suppression initiatives.

According to Jesselyn McCurdy, Interim Executive Vice President for Government Affairs at The Leadership Conference on Civil and Human Rights, “right now, our democracy is in peril. Unless you take immediate and direct action to fully protect against racial discrimination at the ballot box and to ensure that every voice and vote counts, we will lose it … Congress must pass both laws.”

On Aug. 24, the House of Representatives approved the John Lewis Act that among other things, seeks to restore section V of the Voting Rights Act that gave the Department of Justice the power to review any proposed legal changes in states with a history of discrimination against voters of color. 219 Democrats were in favor and 212 Republicans were against; the law now passes to a divided Senate where it faces strong Republican opposition.