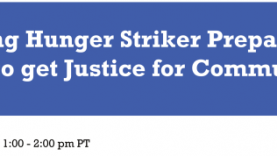 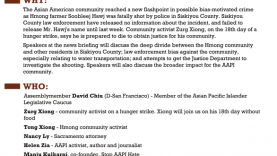 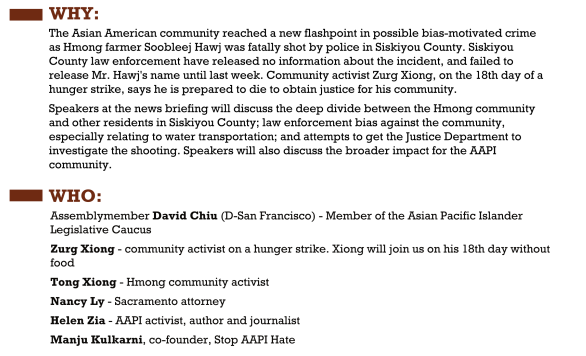 Zurg Xiong ended his hunger strike with nibbles from a doughnut. “It was the best doughnut in the world,” said the 33-year-old activist, in an interview with Ethnic Media Services.

Xiong ended his protest at a critical point for his health: he said he had slipped in and out of consciousness at many points during the three-week strike, and also experienced heart palpitations, a dramatic drop in blood pressure, slurred speech, neuropathy in his legs, and overall weakness. “My health was getting to the point where I may not have been able to recuperate. After the second week, there were many times where I thought I would die.”

Xiong said he had been prepared to die to get justice for his community.

On July 23 afternoon, Xiong appeared at an EMS news conference along with Hmong activists Tong Xiong and Tou Ger Xiong; California state Assembly member David Chiu, a member of the Asian Pacific Islander Legislative Caucus; Sacramento city councilwoman Mai Vang; Asian American community advocate Helen Zia; and Manju Kulkarni, co-founder of Stop AAPI Hate. At the forum, Xiong laid out his demands: an independent investigation into the killing of Hawj, and release of all video footage of the incident derived from body and vehicle cameras.

The shooting occurred at an evacuation point during the Lava Fire in the Mount Shasta/Vista area, home primarily to Hmong farmers. Roads in the area have restrictions on water transportation, limiting each vehicle to under 100 gallons, in an attempt to curb the cultivation of marijuana. Despite the legalization of pot in California, Siskiyou County limits the growing of marijuana to just 12 plants grown indoors. Tong Xiong alleged at the briefing that Siskiyou area police officers have singled out the Hmong community for enforcement of the water and growing restrictions.

“It seems that there is a fundamentally broken relationship between the Hmong community and Siskiyou County and the law enforcement officers sworn to protect them. And we know that the happens when law enforcement does not have a connection or understanding of the communities that they serve,” said Chiu, the immediate past chair of APILC.

A short while after the news conference, the Xiongs and their attorney Nancy Ly received a call from Michael Redding, special assistant to Bonta. Redding told the group that Bonta’s office was aware of the situation, and had received many calls and emails asking for an investigation into Hawj’s death.

“No promises were made about doing an investigation,” said Ly, noting that Redding said the office would look into possible discrimination against Asian Americans in Siskiyou County.

The Attorney General’s office later released a statement, noting that its role in a possible investigation would be limited. “Broadly speaking, our role to automatically assume jurisdiction of officer-involved shootings is limited to specified incidents that result in the death of an unarmed civilian that occurred after July 1, 2021.”

“Beyond that, these critical incidents are generally handled by local law enforcement and district attorneys who are resourced by their local jurisdictions to handle them. We understand that is the case with regards to this incident. Our direct involvement at this stage typically only occurs under certain, exceptional circumstances, e.g. if there is a conflict of interest preventing local authorities from handling the matter,” read the statement.

Zurg Xiong said the Hmong community, along with his family, asked him to end his hunger strike, following the call with Redding. “But just because I’m taking a pause does not mean I’m taking my eyes off. If we don’t see any significant actions, I will go on a hunger strike again,” he said.

Council woman Vang noted a history of racism in the region and stated that the police shooting was a murder. “The tragic murder of the father of three can’t be separated from the discriminatory policies and racist practices that have been happening over the years in this County and specifically by the Siskiyou County Board of Supervisors and the Sheriff’s Department.”

“Our communities know too well how the system continues to be stacked against minorities, against Hmong and Asian American communities,” said Vang.

“Asian Americans have long been rendered invisible by our public officials, political leaders, educational system, as well as the criminal justice system, which has made it possible for injustice and racism to take place without any accountability at all,” said the veteran community activist, noting that Hmongs and other highly marginalized communities within the AAPI designation are especially invisible and vulnerable.

Zia also called for an independent investigation into Hawj’s death.

Manju Kulkarni, co-founder of Stop AAPI Hate, noted that 6,600 bias-motivated incidents had been self reported to the web portal since March 2020. She cited a Pew Research poll which noted that 45 percent of Asian Americans surveyed said they had experienced some form of discrimination.

Kulkarni called for Bonta to release his next steps regarding the shooting by July 26.