Keith Koo-Civic Leadership Forum-Anti-Asian Hate Crimes, What Can We Do Together? 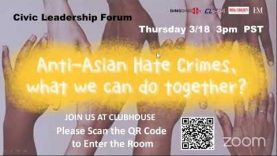 On March 18th, Silicon Valley Innovation Channel – Ding Ding TV, with its partners Civic Leadership USA (CLUSA), India Currents, and EM Collective, organized Civic Leadership Forum on Clubhouse. The topic was “Anti-Asian Hate Crimes, What Can We Do Together?”.

In her opening remarks, Diana Ding spoke about the mass shooting in Atlanta. Eight people were killed, and six of the victims were Asian American women. StopAAPIHate recorded nearly 3800 hate incidents against Asian Americans since the start of the pandemic.

How can we #StopAsianHate? How can we identify and report hate crimes and discrimination? How can we protect ourselves and others? How can we work with other communities? How can we spread awareness and engage local governments? How can we change the way the media perceives the AAPI community?

Silicon Valley Innovation Channel – Ding Ding TV organized this forum for several reasons. #StopAsianHate is trending, but the hate crimes are not new. We wanted to open a conversation on how we can demand immediate and actionable change through legislation and by working with law enforcement and media. The end goal is to protect the AAPI community and all other ethnic communities experiencing the same issues. Also, we wanted to discuss how we can spread awareness about Asian hate crimes and educate other communities on Asian American representation. Likewise, to come up with actionable steps for the media and other communities on how to help.

Keith Koo (entrepreneur, angel investor, radio, and podcast host) kicked off the event. He talked about where he was upon learning about the hate crime in Atlanta and how people in the room reacted to the news and the media coverage.

In his remarks, Sandy Chau (the founder of CLUSA) spoke about the short-term and long-term goals. In the short-term, AAPI communities need to work on raising awareness about hate crimes and being more assertive. Long-term goals would include changing the way AAPI communities are perceived in the media, reaching out to other communities, and working together. As Anthony Ng (Executive Director, CLUSA) pointed out, racism and xenophobia are not new problems and will not be solved overnight. We need to find ways to educate ourselves and work together to combat this problem.

Vandana Kumar (CEO, India Currents) talked about the need for the ethnic media to bring various communities together and pressuring the local governments to act. Jennilynn Nguyen (the founder of EM Collective) spoke about their fundraising efforts. EM Collective supplies the Asian American elders in the South Bay area with personal alarms as self-defense weapons.

Diana Ding opened the floor for discussion. The participants spoke about their experience of hate crimes, ethnic community leaders showed their support, and entrepreneurs spoke of their experiences. Others offered actionable steps to take that included signing petitions and donating to AAPI causes.

Racism, discrimination, and xenophobia are not new problems, Covid-19 brought them to the forefront. It is a problem that impacts all ethnic communities, not just Asian Americans. How we, as individuals and communities, react to them matters. And it is the only way to create an impactful change.

Check this list of resources to learn how to educate yourself and others. It also references organizations to support and donate to and other non-financial ways to support the community.