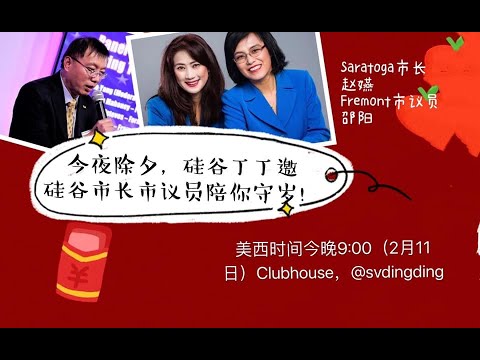 Diana Ding, the founder of Ding Ding TV organized this chat on Clubhouse and Zoom, at the same time live-streamed on Youtube.  Chinese New Year’s Eve is the time for families to get together. Due to the pandemic, many family members in Silicon Valley choose to meet online. Chinese American Mayor and Councilmember joined audiences who were celebrating New Year’s Eve alone and companied them online.

Mayor Zhao and Councilmember Shao talked about Silicon Valley’s housing crisis and shared their in-depth observation.  They also answered the questions about the pandemic and COVID19 vaccination. At the end, all the speakers sent their Year’s of Ox greetings to the audience.

Mayor Zhao holds a Bachelor’s Degree from the University of California, Berkeley in Electrical Engineering and Computer Science and a Master’s Degree from Santa Clara University in Electrical Engineering. She has worked in the semiconductor industry for over 23 years, working in various fields within the industry from an Analog IC design engineer, to technical marketing, business development, and most recently, in sales.

Mayor Zhao, her husband, Tri Hong, three children and her mother have lived in Saratoga since 1998. All three of her children attended Saratoga public schools, with her youngest daughter still currently attending Redwood Middle School.

In addition to her service in the Saratoga community, Mayor Zhao has also served 9 years on the Commission on the Status of Women in the County of Santa Clara. When she has time outside of work and serving the City, she enjoys running, hiking, playing basketball and playing bridge.

Councilmember Shao grew up in Hefei, Anhui Province in China where he earned a Bachelor of Science degree in polymer chemistry from University of Science and Technology of China. He came to the U.S. in 1990 for graduate studies, and earned both an A.M. (Master of Arts) degree and a Ph.D. in chemistry from Harvard University. Councilmember Shao moved to the Bay Area in 1996 and has been serving in the local biotechnology and biopharmaceutical industries for over 20 years. Currently he is the Director of Protein Chemistry in a large biopharmaceutical company in Hayward.

In 2003 Councilmember Shao and his family moved to Fremont and have proudly called Fremont home ever since. He began participating in school-related activities while both his children were going through public schools in Fremont. He is interested in ensuring that at-risk and minority students are provided equitable learning opportunities and as such enjoys volunteering as a youth counselor.

While engaged in education, Councilmember Shao has been playing an active role in diverse community activities. He is a board member of Citizens for Better Community, Asian Pacific Islander American Public Affairs (East Bay Chapter), an advisor of Music for Minors II, and a volunteer of Fremont Unified Student Store. Councilmember Shao is a regular blood donor. He has donated over 17 liters of blood over the past 20 years.

Councilmember Shao lives in Fremont with his wife, Lanfang Hsu, and their children, Jonathan and Claudia.