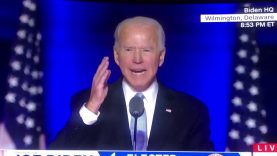 Sacramento, CA — APAPA congratulates President-Elect Joseph R. Biden Jr., and the Vice President-Elect,
Kamala D. Harris. Joe Biden ran and won on a platform to unite our country, Kamala Harris also made history
in her own right as the first woman of African American and Asian American heritage to serve in that very
important position. Americans of every gender, ethnic, racial, and religious background should rejoice and
celebrate our diversity.
It was a contentious election that had our nation on edge for four agonizing days while the tedious and
meticulous tallying of votes took place in Pennsylvania, Nevada, Arizona, and Georgia to ensure an honest
and legitimate accounting of the results.
The fact that the Presidential Election was so closely contested makes it evident that our country is deeply
divided and has been for some time. We are faced with many challenges including an enduring pandemic, a
deteriorating environment, an ailing economy, an unequal health care delivery system, a crumbling
infrastructure, systemic racism, an injudicious immigration policy and an inequitable income distribution
system. Simultaneously, we are being battered by a tsunami brought on by the fourth industrial revolution
when many traditional jobs and sources of income will be impacted by robotics and artificial intelligence.
The two major parties each have their own well-founded concerns about our country’s direction. We hope that
they will resolve their differences and learn to work together in unity to benefit our country. We should listen to
the silent but fervent plea of a large swath of America who has been left behind by globalization and
technology, a message that former Presidential Candidate Andrew Yang has been preaching.
APAPA is a non-political and non-partisan organization, we are encouraged that there was a record turnout in
the presidential election. We are extremely pleased that many APIA participated in the voting process and that
many APAPA members actively phone-banked to encourage voter turnout in a non-partisan manner. We look
forward to opportunities to advance the welfare of all Americans regardless of party affiliation. It’s time for
America to heal and move on!
###
APAPA is a non-profit, non-partisan and grassroots organization. Its mission is to empower Asian and Pacific
Islander (API) Americans through education, leadership, and active participation in civic and public affairs.

Silicon Valley Innovation Forum – Dialog between US and Asian