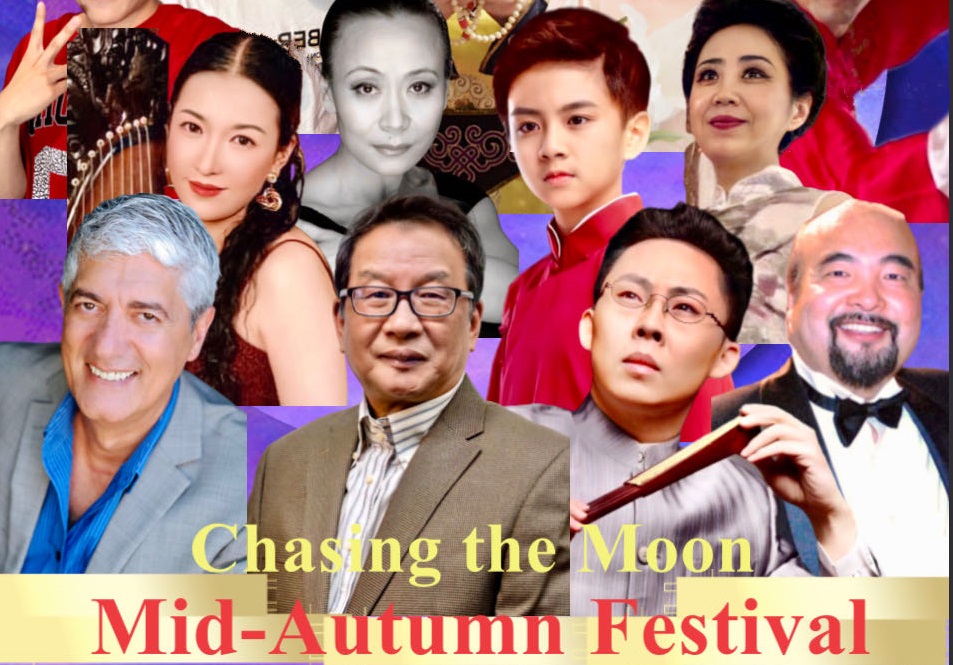 Chasing The Moon, Dreaming of Motherland

Mesmerize every happy moment for you 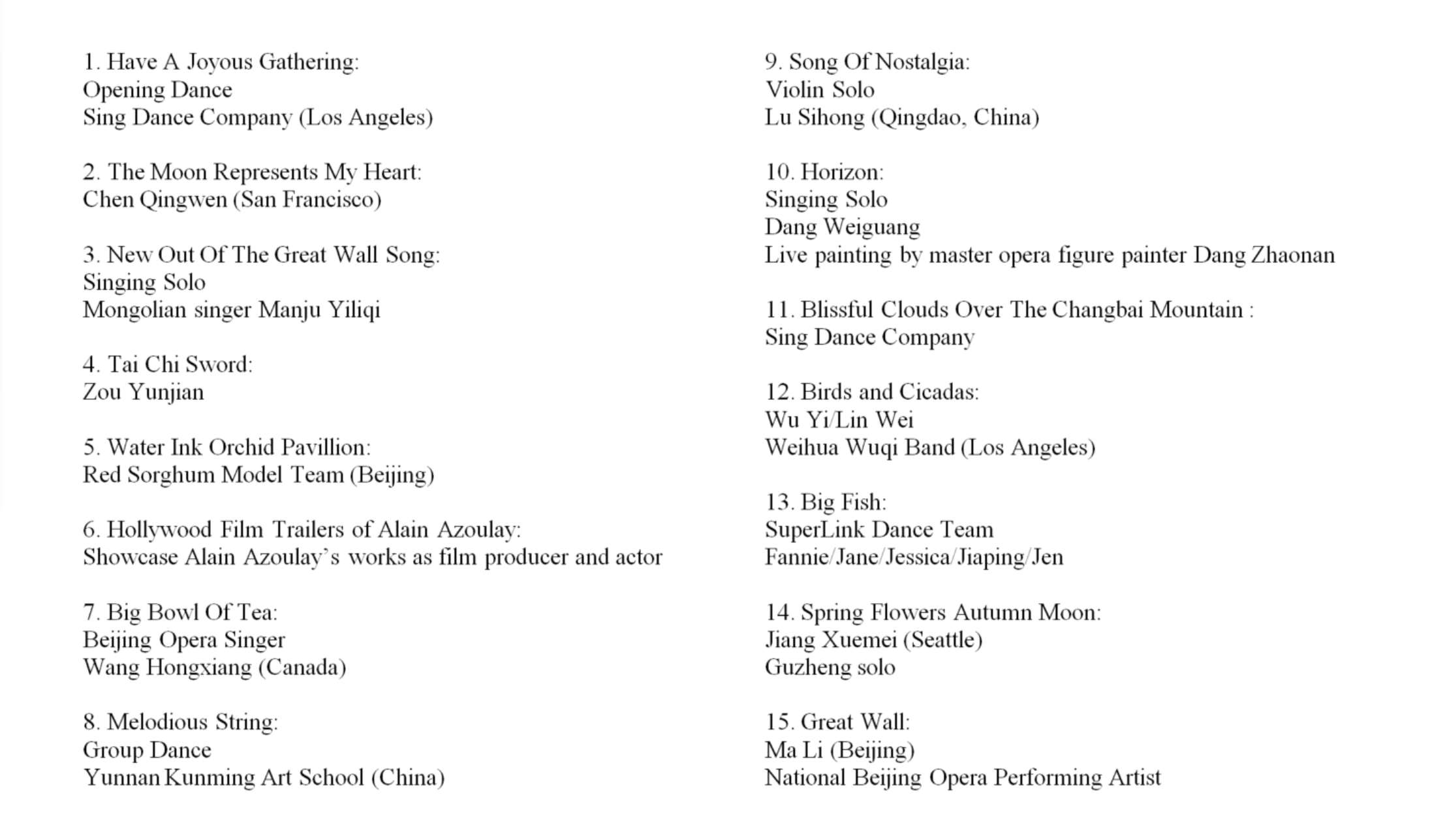 Director and professor of the Beijing Opera Department of the Central Academy of Drama, a renown young master of Beijing Opera performing artist, gold award winner of the 6th CCTV Beijing Opera Actor TV Contest, winner of the most prestigious “Plum Blossom” award in Chinese drama. In 2018, “Ma Li Beijing Opera Art Festival” was held in San Francisco. He received “Cultural Exchange” awards from Florida state and California state. His submitted program “Great Wall of Qin Emperor” about the first emperor of China filmed by CCTV was magnificent and overwhelming.

A famed baritone singer and vocal professor. He graduated successively from Shenyang Conservatory of Music, Central Conservatory of Music, and Millikin University School of Art. Winner of the Excellence Award in the National Young Singer TV Contest, he had taught in domestic music academy for years and had cultivated many outstanding young singers. In 2000, he was invited by Dr. Ye Ying, a world-renowned singer, to hold a solo concert in the United States. He was praised by the English media as one of the world-class vocalists.

Alain Azoulay, a.k.a. “Azoulay”, has been an actor, voice actor and producer in the film industry for many years, and has participated in more than 60 films. The goal of the Azoulay Film Fund is to become a productive, profitable and creative force in the film industry and to establish aggressively the cooperation with the Chinese market. In this program, Alain is showcasing a trailer of his works as film producer and actor.

Wang Hingxiang is a 12 years old Chinese Canadian, a popular Beijing Opera child star on CCTV. He has always been obsessed with the Beijing Opera. His program is “Big Bowl of Tea” (this song was once sung together with Li Guyi). He had been Invited by many domestic TV stations to perform, including Hunan Satellite TV’s “Happy Camp”, CCTV’s large-scale cultural programs “Classic Songs Forever” and “School First Lesson”, CCTV4’s (CCTV International Channel) “The World Listens to Me”, Guangdong Satellite TV’s large-scale intellectual program “Knowledgeable”, etc.

It is an active model team on Beijing model stages, having the most beautiful models with an average age of 52 years old and an average height of 1.66 meters. Age is only a number, mentality is the most important thing. Aspiration is not just by thinking, but by boldness. After tempering, they become the most beautiful red rays of the setting sun on Beijing model stages. Their program video is “Water Ink Orchid Pavilion”.

Wu Yi, a musician and singer, studied music since childhood. He graduated from Beijing Modern Music Institute and later studied Bel Canto in the US. After graduation, he performs in restaurants and bars in Los Angeles. Their program video is “Birds and Cicadas”, an original song composed by them.

He is the 2012 Taiwan Hokkien Writing Contest first place and the 2018 Supernova Singing Contest second place. He had collaborated with Hollywood music producer Natan Wang on original songs “Little Star”, “Not Contact” and “Thirst”.

Known as Little Teresa Teng in the Bay Area, she is a contract anchor for the “WeSing”. Her program video is “The Moon Represents My Heart”, a masterpiece of Teresa Teng. Shelly specially recorded the song for our “Chasing Moon Mid Autumn Festival”.

is an amateur dance troupe under SuperLink. It is formed by professional women who have impetuous passion in dance. In workplace, they are professional accountants, engineers and managers. In life, they are multi talented and excellent in singing and dancing. Even though of the pandemic, they have remained sunny and confident. Their program video is “Big Fish” with anchor dancers from Beijing Dance Academy. The dance was choreographed by Yang Yang, head of California Feiyang Art Troupe. Fannie, Jane, Jessica, Jianping and Jen are among the performers.

Miss Wang Xinyu, artistic director of Los Angeles Sing Dance Company, graduated from the Dance School of Central University for Nationalities of China specializing in dance education and Chinese folk dances. She had won the “Garden Award” and the Excellence Award in Chinese dance competition the “Peach and Plum Cup”. She had visited and performed in many countries, and was awarded Outstanding Artist by those visited countries. The performances by her dance troupe had won numerous competition first prizes in China and in America. There are two dances in her program video, one is our program opening dance “Have A Joyous Gathering”, another is “Blissful Clouds Over The Changbai Mountain”.

Miss Manshu Yiliqi is a Mongolian singer currently traveling and living in the United States. She is the descendent of Genghis Khan of the Mongolian Golden Family. Her magnificent voice had earned her praised nicknames such as “Demon Throat”, “Goddess of wonderful voice”. She was the Director of China’s “Northern Drifters Spring Festival Gala” and the Director of the first US “World Music Charity Gala” organised by overseas Chinese. As an extremely talented singer, she was the monthly and weekly champion in CCTV’s “Avenue of Stars” Competition. Her program video is “New Out of the Great Wall Song”, which was adapted by Manshu Yiliqi herself. The overwhelming video was shot by CCTV. This song cleverly incorporated elements such as Mongolian long tunes, guttural sounds and shaman music, etc., and creatively expressed the sadness before the expedition. , the fierce situation of battle and the joy after winning.

Rayis known as the “rock star of the flute” and is praised for his exquisite performance in the “San Francisco Classical Sound”. He is praised as one of the most outstanding young concert artists today. He received a PhD in Musical Art from Stony Brook University. 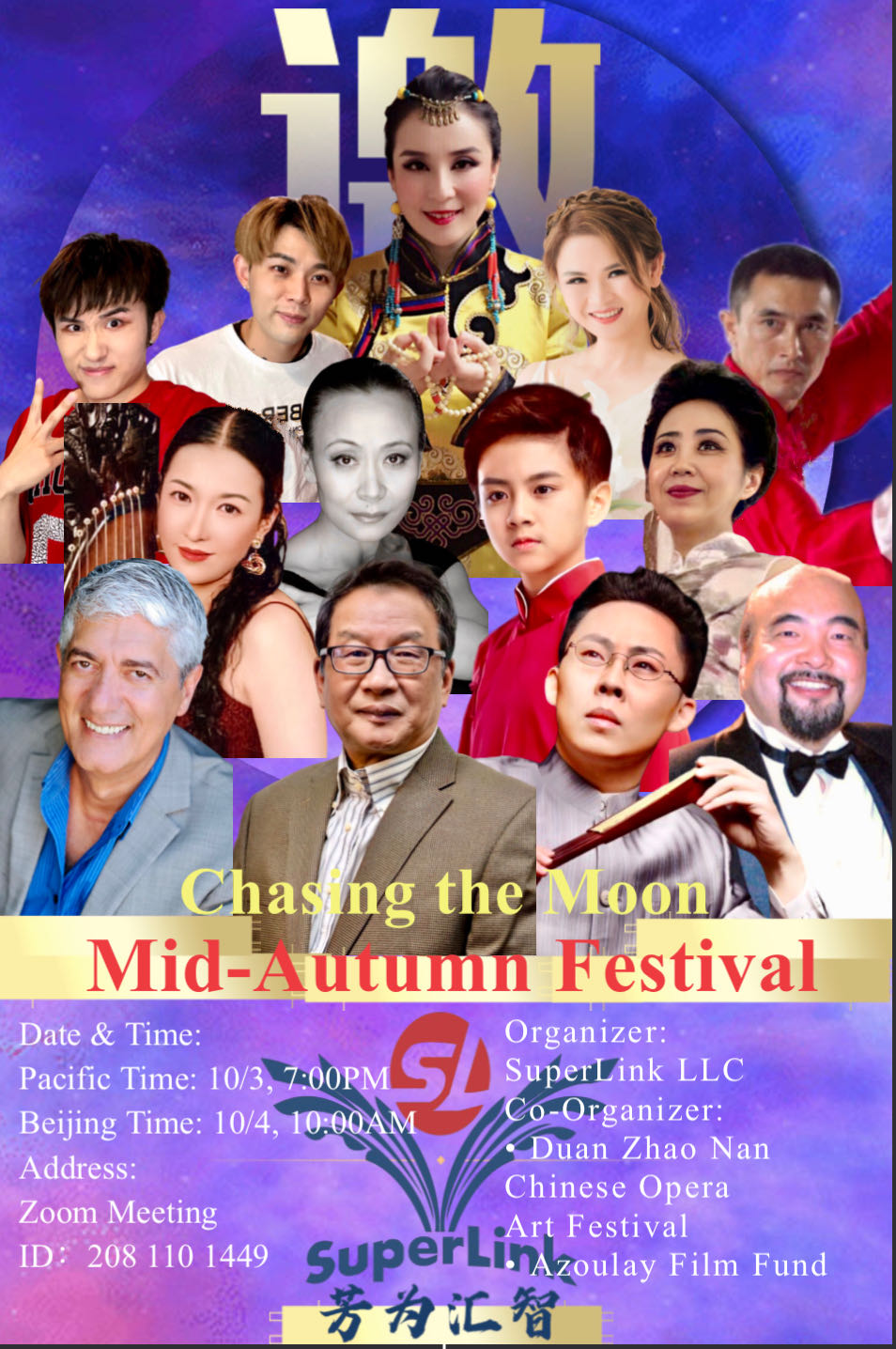 “National Compassion Day” Petition to the President of the United States and members of The U.S. Congress

What is Measure T and why it matters?