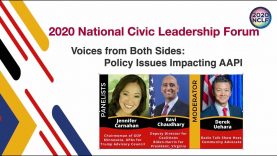 Asian Pacific Americans (APAs) remain the fastest growing populations in the United States, at a rate of 46% and 40%, respectively, between the year of 2000 and 2010. This stands in comparison to a 10% population growth rate nationally.*

National Civic Leadership Forum is thrilled to have the Trump/Pence and Biden/Harris representatives to talk about the following important APA issues:

Deputy Director for Coalitions, Biden-Harris for President in the State of Virginia

The Future of Alameda County

“The Power of We” Continues