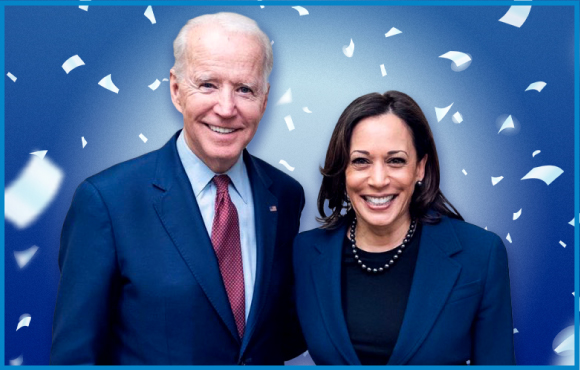 Senator Kamala Harris of California will be Joe Biden’s running mate in the 2020 election. The daughter of Jamaican and Indian immigrants, Harris is breaking barriers with this nomination. This is an unbelievable moment for Black Democrats everywhere. We’re so happy for Kamala Harris!

About Kamala Harris From Wikipedia:

Kamala Devi Harris (/ˈkɑːmələ/ KAH-mə-lə;[2] born October 20, 1964)[1] is an American politician and former lawyer serving as the junior United States Senator from California since 2017. A member of the Democratic Party, Harris is the Democratic vice presidential nominee for the 2020 election, running alongside Joe Biden. She is the first African American woman and first South Asian American person to be chosen as the running mate of a major party’s presidential candidate.[3]

Harris was narrowly elected Attorney General of California in 2010, and was re-elected in 2014. Harris faced criticism from reformers for tough-on-crime policies she pursued while she was California’s attorney general. In November 2016, she defeated Loretta Sanchez in the 2016 Senate election to succeed outgoing Senator Barbara Boxer, becoming California’s third female senator, the second African American woman and the first South Asian American to serve in the United States Senate.[4][5] As a senator, she has supported healthcare reform, federal descheduling of cannabis, a path to citizenship for undocumented immigrants, the DREAM Act, a ban on assault weapons, and progressive tax reform. She gained a national profile for her pointed questioning of Trump administration officials during Senate hearings, including U.S. Attorneys General Jeff Sessions and William Barr, and Associate Justice nominee Brett Kavanaugh.[6]

Harris ran for the Democratic nomination for President of the United States in the 2020 election, briefly becoming a frontrunner before ending her campaign on December 3, 2019, citing a lack of funds to continue.[7] She was announced as Joe Biden’s running mate for the 2020 United States presidential election on August 11, 2020, becoming the third major party female nominee after Geraldine Ferraro and Sarah Palin.

Ahead of the Impeachment trial of Donald Trump on January 16, 2020, Harris delivered remarks on the floor of the Senate, stating her views on the integrity of the American justice system and the principle that nobody is above the law:

“We now face a choice: will we insist that we have one system of justice that applies equally to all? Or will we continue to have two systems of justice, in which some are above the law? […] The Senate is charged with deciding whether the President of the United States, with all of his power and supposed wealth, will be held accountable for his actions – or whether we will finally live up to the principle: ‘Equal Justice Under Law.’”

Harris later asked Senate Judiciary Chairman Lindsey Graham to halt all judicial nominations during the impeachment trial, to which Graham acquiesced.[262][263] Harris voted to convict the President on charges of abuse of power and obstruction of Congress.[264]

After Biden and Harris launched their campaigns, in May 2019, senior members of the Congressional Black Caucus said that a Biden-Harris ticket would be an ideal combination to defeat Donald Trump and Mike Pence.[290] In late February, Biden won a landslide victory in the 2020 South Carolina Democratic primary with the endorsement of House Whip Jim Clyburn, with more victories on Super Tuesday. In early March, Clyburn suggested Biden choose a black woman as a running mate, noting that “African American women needed to be rewarded for their loyalty”.[291] In March, Biden committed to choosing a woman for his running mate.[292]

On April 17, 2020, Harris responded to media speculation and said that she “would be honored” to be Biden’s running mate.[293] In late May, in relation to the death of George Floyd in an incident of police brutality and ensuing protests and demonstrations, Biden faced renewed calls to select a black woman to be his running mate, highlighting the law enforcement credentials of Harris and Val Demings.[294]

On June 12, The New York Times reported that Harris was emerging as the frontrunner to be Biden’s running mate, as she is the only African American woman with the political experience typical of vice presidents.[295] On June 26, CNN reported that more than a dozen people close to the Biden search process considered Harris one of Biden’s top four contenders, along with Elizabeth Warren, Val Demings, and Keisha Lance Bottoms.[296]

Harris was chosen on August 11, 2020. She is the first African American woman and South Asian American to be picked as the vice presidential running mate by the presumptive presidential nominee for a major party ticket.[3][297]