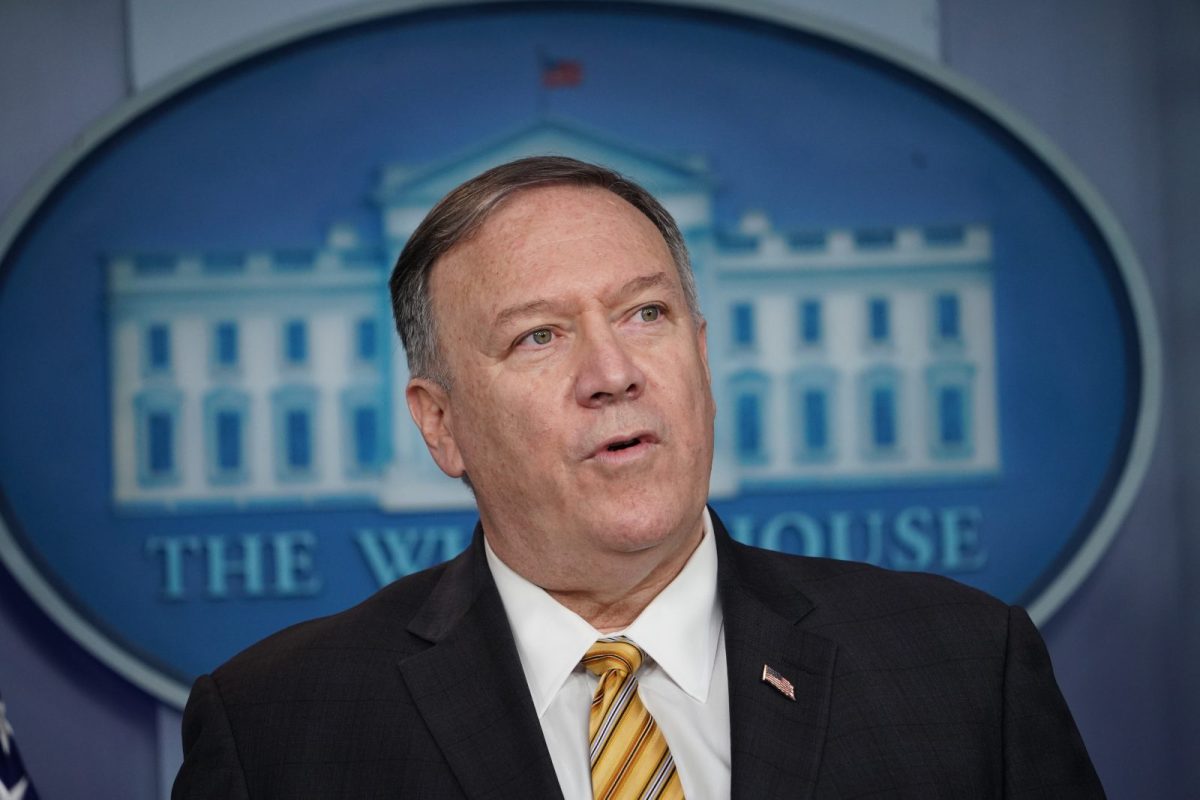 Sino-US cooperation a matter of self-interest

China has learned what the US apparently has not, that pandemics affect everyone in the world eventually

Picture: US Secretary of State Mike Pompeo continues to favor anti-China policies in the midst of the Covid-19 crisis.
Photo: AFP/Mandel Ngan

In 2014, when the Ebola virus broke out in West Africa, US president Barack Obama’s administration invited China to join in leading the multinational effort to suppress the disease. Despite ghastly local hygienic conditions and a terrifying rate of mortality, the outbreak was brought under control in a few months.

With China electing to join the effort under the auspices of the World Health Organization (WHO), it was a successful collaboration involving a host of other nations. It was a natural outcome because these countries followed international norms. That is, containing the original outbreak in situ is always easier than to let the contagion explode into a worldwide pandemic. Advanced nations with the resources and expertise to help do so out of self-interest.

But this time, the US response to the novel coronavirus outbreak in China was radically different. President Donald Trump’s White House elected to stay on the sidelines and instead raised the decibel level of a rhetorical blame game. The Trump team seemed determined to keep China as an adversary and throw sensible reasoning out the window.

Early on, Secretary of State Mike Pompeo accused Beijing for keeping the true nature of the disease hidden. He alleged that China’s lack of candor had cost the US valuable time in preparing to fight the disease, which he persisted in calling the “Wuhan virus” until his boss overruled him by writing “Chinese virus” over “Covid-19” in his press-conference script.

The Western media joined in heaping scorn and ridicule on China. They considered the Wuhan lockdown draconian and a violation of human rights, questioned China’s competence to manage the outbreak, and labeled China the “sick man of Asia” all over again.

It wasn’t until March 13 that The New York Times made a modest attempt at balanced reporting by posting a commentary by Ian Johnson, an NYT writer based in Beijing. He flew from the Chinese capital to London and observed the rigorous precautions taken at Beijing International Airport in contrast to the lackadaisical handling of travelers at Heathrow.

Johnson sadly concluded that China’s draconian measures, which bought precious months for the world to prepare, were being squandered by the West. Notwithstanding Pompeo’s claim that his country lost precious time because of China, the Trump administration actually did squander two months, January and February, idly watching while China was battling the virus.

During this debacle, Trump got rid of public health expertise in his National Security Council, he cut the budget of the Centers for Disease Control and Prevention (CDC), he didn’t take the threat seriously and thought the disease would go away under the warm sun of April. As late as January 30, Trump called the virus a hoax. Then on February 25, he assured the American public that he had the matter “very well under control.”

Trump was and is simply clueless.

Even before the NYT piece on March 13, the pandemic had already struck hard at Italy. Overnight, Prime Minister Giuseppe Conte had to change his plans for a regional lockdown into a nationwide lockdown.

He saw that for any hope to contain the contagion, he would have to follow the Wuhan protocol and take the draconian steps to lockdown. Thus the world has come to appreciate that the “Wuhan model” of total “draconian” lockdown was the only way to control the epidemic.

A particularly useful compilation of actual events as they occurred in China was posted by Nature, a prestigious scientific journal, on March 19.

Nature said, “By contrast [to SARS], three weeks after the first known case of the disease now known as Covid-19, China had notified the WHO of a spike in cases of a pneumonia-like disease. Two weeks after that, the coronavirus had been isolated, genetically sequenced, and a diagnostic test developed, giving China the tools it needed to launch one of the greatest infectious-disease containment efforts the world has ever seen.”

Neither Nature nor any other third-party sources reported any evidence that China had failed to share its findings promptly with the World Health Organization or the rest of the world. In fact, the Chinese notified the WHO even before they knew exactly what they were dealing with. It would appear that accusations of coverup are based on the presumption that China should have acted on information it didn’t yet have.

Findings crucial for the world

From China’s investigations, some of the crucial findings included that the disease can be transmitted from person to person, a safe distance to maintain is at least 2 meters, and an infected person can be contagious for five days before showing any symptoms of being ill. These were essential data necessary to understand the virus and to take necessary steps to contain the epidemic.

It took about a month after the Wuhan lockdown to bring the contagion under control. Having shown the world how to contain the pandemic, China is now sending teams to Italy and Spain to help treatment and containment. Serbian President Aleksandar Vučić asked for help and Beijing responded within 24 hours.

Cynics like to call this a Xi Jinping victory lap. That’s nonsense. China has learned what the US apparently has not, that pandemics affect everyone in the world, immediately at the site of the outbreak and everywhere else in time. Helping anyone else anywhere in the world is in China’s self-interest.

Yet America’s mainstream media can be most persuasive and determined to cast China in a bad light. To this day, even after much more information has come to light, US academics, pundits, talking heads and of course politicians of both parties still reflexively mention China’s early coverup as a given in their discussion of the coronavirus.

The real coverup is the blinders on Trump and his vision of making America great that does not rely on science, technology or international relations.

Trump’s religion is his hutzpah and belief in his unlimited power. He needs a vaccine? He’ll get it tomorrow. He wants a cure? It will be delivered day after tomorrow. Or so he thinks.

US helped China with SARS

As a communist country, China does not rely on any religion. But because of its relative inexperience in public health issues, it did need American assistance to battle severe acute respiratory syndrome (SARS) in 2003.

The CDC sent teams over to Beijing to help their counterparts implement ways to contain the virus. Since then, having learned from the SARS experience, China has invested heavily in high technology in preparation for the next outbreak.

China has developed advances in artificial intelligence, remote diagnostics, robotics, and genomic epidemiology as tools to contain infectious diseases. Also, not least is the ability to build a 1,000-bed hospital in a week.

Just one indicator of China’s progress would suffice. Beijing sent 42,000 medical workers from elsewhere in China to Wuhan to help quell the epidemic. Because of their protective gear, training and work protocol, not one was infected by the virus. That’s impressive by any measure.

In California, we are abiding by “shelter in place,” a less draconian term for a Wuhan-style lockdown. Whether it will be effective depends on American willingness to give up exercising rights of individual freedom for the common good.

Some hot spots such as Boston or New York could still go out of control and the epidemic explode exponentially. There may come a point when Trump will have to ask for an act of Congress to rescind all the hostilities toward China and send Beijing a request for assistance.

Having helped China on SARS in 2003, the likelihood of China reciprocating on Covid-19 is good.

Dr David Ho into the breach

The latest decidedly non-Trumpian development is on the cover of the latest issue of Bloomberg Businessweek featuring Dr David Ho. Inside, the magazine reported that Ho was assembling a team to find a generalized approach that would not only cure Covid-19 but would lay the foundation to treat future mutations of the coronavirus.

Ho is a former Time magazine Man of the Year renowned for his research on the human immunodeficiency virus that causes AIDS. His multinational and multidisciplinary team is mapping out a multifaceted and accelerated plan of attack.

Ho is an ethnic Chinese from Taiwan. Key members of his team are from the People’s Republic of China. Some of his former students hold key scientific positions in mainland China. With his reputation and network of connections, he will have access to experimental compounds from Hong Kong and Shanghai for his investigation not likely available to anyone else.

A big chunk of his financial support came unsolicited from Jack Ma and other donors in China. Funding came without preconditions, just faith and confidence in Ho’s record and reputation. This is what cross-border synergy should be all about.

Can you imagine what would have happened if Ho’s team had already been decimated by Trump’s xenophobic anti-Chinese policy? In the past two years, many ethnic Chinese technical talents have been harassed, hounded and forced to leave the US for China – a subject for another time.

Is that smart or what?

Dr George Koo recently retired from a global advisory services firm where he advised clients on their China strategies and business operations. Educated at MIT, Stevens Institute and Santa Clara University, he is the founder and former managing director of International Strategic Alliances. He is currently a board member of Freschfield’s, a novel green building platform.