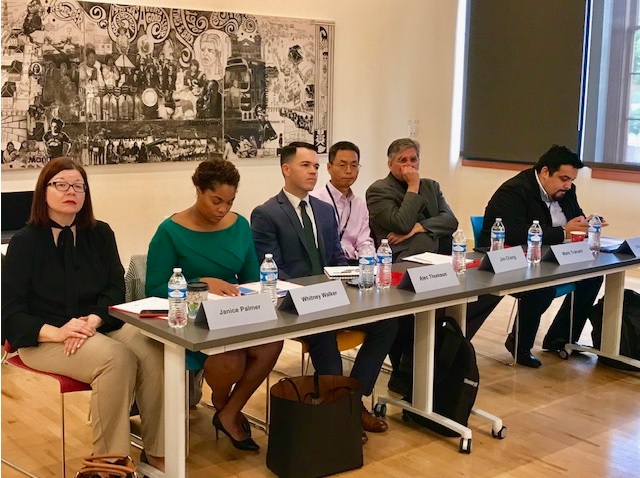 PHOENIX, AZ. — In the conference room of the Phoenix Indian School Visitor Center, a chair sat empty at a recent convening of community media and stakeholders to promote Arizona’s 2020 census.

Lizbeth Luna, regional director for NALEO’s Arizona census initiative, abruptly cancelled as a speaker, learning her father had been detained by the U.S. Immigration and Customs Enforcement agency (ICE). The intersection of immigration and the census was one of several topics at the convening, but the empty chair spoke to the tenuous netherworld of immigrant status in the United States.

In June, the Supreme Court barred Commerce Secretary Wilbur Ross from adding a question on citizenship to the Census 2020 form. The ruling was applauded by Katie Hobbs, Arizona’s Secretary of State, who supports a permanent ban on such an initiative. After the question’s dismissal, advocates continue to fear diminished participation in the census, particularly from the Latino community. Worries are the current administration will not respect the confidentiality of personal information, despite laws and fines discouraging the sharing of individual census responses among federal agencies.

At the convening, co-hosted by Ethnic Media Services, OneArizona, the Arizona Community Foundation and the Leadership Conference Education Fund, EMS executive director, Sandy Close encouraged attendees to collaborate in their messaging and outreach on Census 2020. Citing the decrease of traditional community media as one motivation, Close said the driving impetus for collaboration should be concern about the potential loss of census data-based funding for federal programs that contribute to children’s well-being. Children are the most likely to be undercounted and highly vulnerable to funding reductions.

Jim Chang, state demographer, Arizona Office of Economic Opportunity, provided an overview of the state’s racial demographics. He projects that the decreasing and aging white population, currently comprising 54%, and the increasing, younger Latino one, now at 32%, would reach relative numerical parity by 2050 at 45% and 40% respectively. The balance of the population, with no cohort above 5%, is comprised of Asians, blacks, Native Americans and others.

“A lot of people I talk to believe that, right now, the births to Hispanic mothers are higher than the births to non-Hispanic whites,” Chang said, “but that was true only one year, 2007.” Since then, white, non-Hispanic women have led their Latina counterparts with no anticipated change through 2050. Importantly, Chang has seen estimates of Arizona’s 2010 census undercount of children at 4%, 7% and as high as 10%. “Every method has its flaws,” Chang said, but overall, compared to other states, Arizona did fairly well in its total population 2010 census assessment.

Alec Thomson, representing the Arizona governor’s office, acknowledged hard-to-count communities within the state where undercount percentages have been higher than even those for children.  In recent censuses, kids younger than 5 have been omitted more than anyone else nationwide.

Thomson said Arizona spent no money for 2010 census outreach due to fiscal caution after 2008’s recession.  But a key motivation to encourage 2020 census participation is a calculation that for Arizona, annually, “a 1% undercount is a direct loss of $62 million to the state.”

For 2020, Thomson said, “Governor Ducey has made achieving a complete count a priority and was able to secure existing state resources to support the efforts of the Arizona Complete Count Committee and the AZ Census 2020 effort.”

Arizona thus far has about $1.5 million allocated for paid media advertising to promote census participation, Thomson said, and, in an email to Ethnic Media Services, wrote: “we are hoping to grow that number, through existing state dollars or support from the philanthropic community.

Whitney Walker, director of communications and public policy for Protecting Arizona’s Family Coalition, (PAFCO), spoke to the need for more state level advocacy to bolster the housing trust fund and domestic violence shelters, among other initiatives that ameliorate “the cycle of poverty vulnerable Arizona families are facing.”

To her point, the annual Annie E. Casey Foundation’s KIDS COUNT Data Book on the status of American children living in poverty ranks Arizona at only 43rd in overall wellbeing for children.

In Arizona, immigration is a highly contested issue. Walker said the political climate can interfere with the dissemination of clear and concise information. She didn’t dispute the assessment of Arizona’s 2010 census efforts, but noted that there was “a 30% undercount for Maricopa County, which now has a population of over four million people.”

Janice Palmer of the Helios Education Foundation, which focuses on Latino students’ academic success, underscored Walker’s observations: “Maricopa County had the second largest undercount of Latino children.” Using 7% as the projected undercount,  she estimated, in that county alone, 27,000 Latino children were omitted from census 2010 data.

The Native American and Alaskan Native populations pose unique challenges to the census, according to Mark Trahant, editor of Indian Country Today.

“The primary problem for us is that it comes down to self-identification, and when you’re dealing with tribal communities, you’re talking about citizenship and a more complex way of looking at identity,” Trahant explained. He added that ICT has been reporting for three years that the 2020 census has been in trouble, partly due to underfunding. In Alaska, he noted, two field tests were cancelled to save funds and, overall, a dearth of linguists available to translate census instructions and information into local languages.

For Trahant, paramount is how to transform Native American presence into political representation. Even with the recent election of Native Americans to Congress, he calculates they constitute less than three-quarters of one percent of that body, assuming Native Americans represent 2% of the population, which is itself “probably an undercount.”

To achieve accuracy, the Census Bureau will have to contend with Native Americans’ lack of broadband access and the difficulty of determining addresses in remote communities. Additionally, Trahant said tribal identification will be “a demographer’s nightmare” because many Native Americans have multiple tribal identifications in their family trees. How will resources be fairly allocated, he mused?

D.L. White, reporting for The Arizona Informant, also raised the issue of accountability, asking state Rep. Diego Rodriguez – the convening’s final speaker — how an undercount could negatively affect funding for minority groups and refugee communities. Rodriguez responded that allocating funds is a result of horse trading at the heart of the budgeting process.

“We all agree that the budget represents your values,” Rodriguez said, but “we have to make sure our numbers are counted so that we get adequate representation.”

Acknowledging representatives from Somali, Congolese and other emerging refugee groups at the briefing, as well as from Native American, black and Latino populations, Tameka Spence of Arizona Community For Change emphasized that the first step is addressing the trauma many have experienced. “In trying to help folks understand why the census is important, we’re asking them to confront that trauma and we need to acknowledge that it’s there, it’s real.”

Though the empty chair attested to the Luna family’s immediate trauma, the Indial School Visitor Center venue exuded optimism. Once the site of a federally run school to socially re-engineer Native American students, Center director Rosalie Talahonva – herself an alumna — recalled how students were drawn from different tribes often deeply at odds with each other as well as the U.S. government. Whether antagonisms were ancient or personal, new or imagined, the students persevered, forging consensus and cooperation among themselves — an inspiration for Arizona’s mosaic of stakeholders striving to achieve an accurate census count.

We are very sad to report that Tameka Spence, who so enriched the exchange at the convening, died in a traffic accident in Phoenix on Dec. 22.