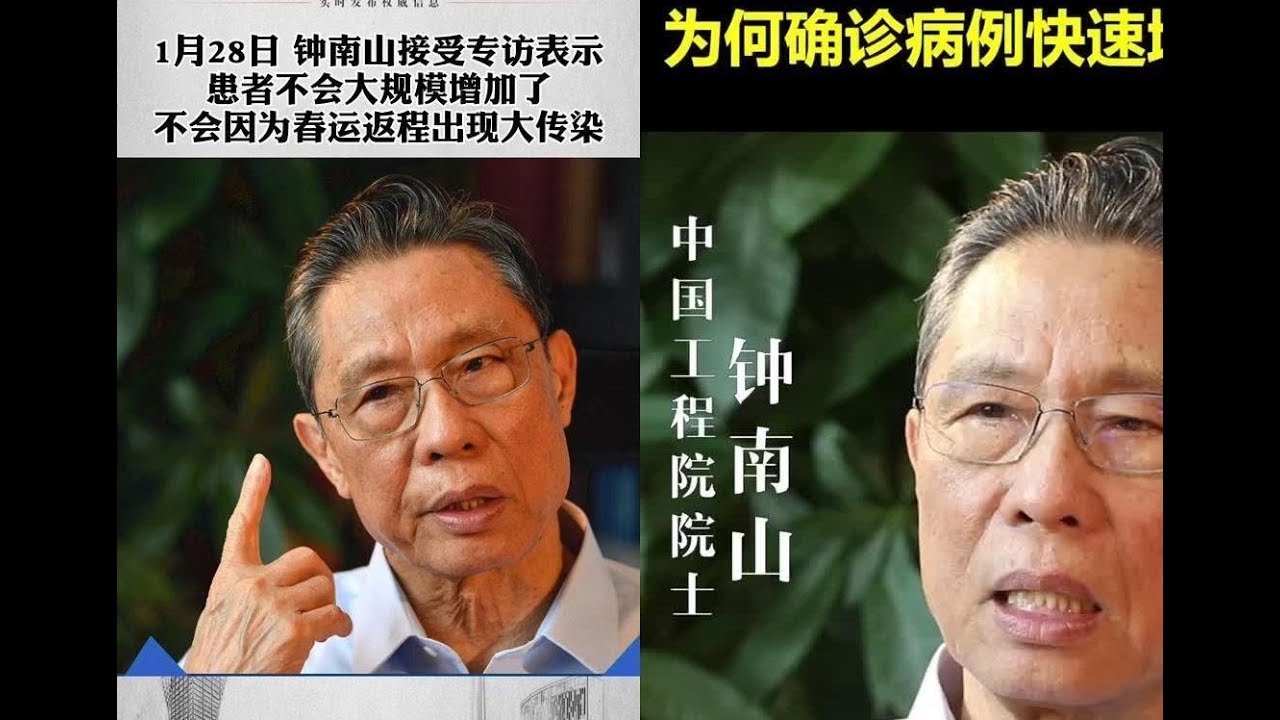 While many in China are taking high-speed trains back home for the upcoming Spring Festival, Zhong Nanshan, a renowned respiratory expert, rode the rails on Saturday to Wuhan, Hubei province, the epicenter of the viral pneumonia outbreak.

Zhong, 84, who heads a National Health Commission expert panel conducting research on the new epidemic, was the first to confirm on Monday during an interview with China Central Television that the new coronavirus can be transmitted between humans.

He advised people not to travel to and from Wuhan as he worked to combat the outbreak.

Two photos circulated widely on social media by Guangzhou Daily showed Zhong taking a short break on the train and rushing to a hospital in Wuhan to learn about patients’ conditions.

Zhong played a huge role in discovering the severe acute respiratory syndrome coronavirus in 2003, and he managed the SARS outbreak in Guangdong province at the time. He was dubbed the “SARS hero”, and his efforts made him a household name across the country.

Zhong, then 67, was head of the expert task force appointed to fight the disease in the province.

When SARS cases peaked in late February 2003 in Guangdong, researchers at the China Center for Disease Control and Prevention announced they had detected the SARS pathogen and identified it as a new type of chlamydia.

Zhong and other doctors in Guangdong questioned the finding. With their clinical virology experience, they believed SARS was much more likely to be caused by an unknown virus.

The family of bacteria called chlamydia can be contained by antibiotics, yet antibiotics were ineffectual against SARS.

On April 12, 2003, Zhong and his colleagues isolated the coronavirus from specimens taken from SARS patients.

Four days later, the WHO announced that the coronavirus is responsible for causing the typical symptoms of SARS.

Bellow is a poster designed by China Daily website to pay tribute to the virologist. Please feel free to share it.

Zhong Nanshan visits the Jinyintan hospital, where the patients with pneumonia caused by the new strain of coronavirus are being treated, in Wuhan, Hubei province, China January 19, 2020. (China Daily via REUTERS)
The public face of China’s effort to control a new kind of coronavirus is an 83-year-old doctor.
Zhong Nanshan is a specialist on respiratory diseases. He became famous 17 years ago for “daring to speak” in the fight against Severe Acute Respiratory Syndrome, also known as SARS.
Zhong has been named to lead the National Health Commission’s investigation into the new virus. The virus has frightened millions of Chinese who are traveling for the week-long Lunar New Year holiday, which starts on Saturday. The rising number of cases has affected financial markets worldwide.
On Monday, Zhong reported that the virus could spread from person to person. Local health officials had said earlier that human-to-human transmission was limited. Monday night, Chinese President Xi Jinping called for strong action to stop the spread of the virus.
Zhong became famous in 2003 when China was accused of covering up a major outbreak of SARS. Since then he has gained another kind of fame: pictures of him lifting weights to keep his muscular body are widely available on the internet.
On Tuesday, he told reporters in Guangzhou that the government had been truthful about reporting cases of the coronavirus. He also said the government was trying to deal with the outbreak with honesty and openness.
The virus first appeared in the city of Wuhan, which has 11 million people. On Thursday, officials closed off all transportation to and from the city. Sources told the Reuters news agency that Zhong had pushed for the move.
China’s government also isolated two other communities: the nearby cities of Huanggang and Ezhou.
During the new virus outbreak, the government has warned officials that they may face public shame if they are not truthful about the number of people infected.
Daring to speak
In 2003, the situation was very different. Chinese officials were fearful of telling the truth about the SARS outbreak. At the time, Zhong talked to reporters.
A video from 2003 shows him telling reporters how little was then understood about SARS. No one knew how the virus was spreading or the correct treatment.
In a 2016 television program by state broadcaster CCTV, Zhong remembered a reporter asking him if the SARS outbreak was under control.
He said, “I couldn’t help myself. I said it’s not at all under control.”
The program praised Zhong for “daring to treat and daring to speak.”
As many as 774 people died in the SARS crisis, which affected nearly 30 countries.
I’m Jonathan Evans.
The Reuters News Agency reported this story. Susan Shand adapted it for Learning English. George Grow was the editor.
coronavirusDDTVDing Ding TVWuhanZhong Nanshan