Happy New Year and what better way to bring in a new year’s beginning than to dine at two of  native San Franciscans favorite restaurants. San Francisco’s cuisine is a meld of the many cultures that thrive in this city’s welcoming atmosphere. One would never have to leave the city limits and be able to taste culinary fare from all over the world without leaving its 25 miles radius around town. It’s easy to judge a restaurant’s success by the throngs lined up waiting to have the privilege to enter, and the Hayes Valley trendy popular a mano is no exception. Not only does this no-reservation restaurant draw line-ups each evening, but its lunch crowds line up in anticipation of the 11:30 am opening too. 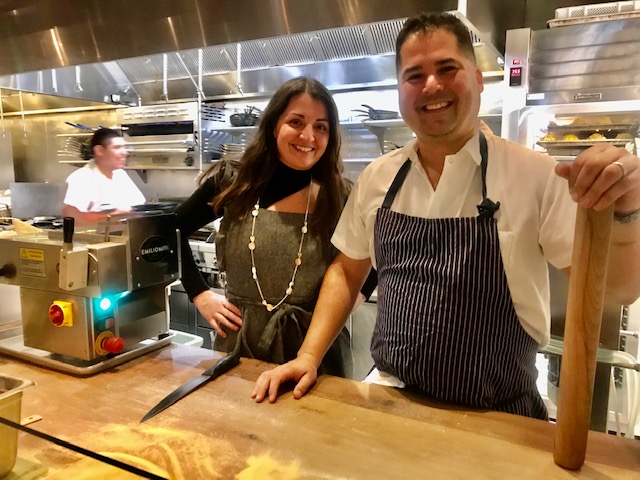 Why, you ask?  After visiting it and meeting its affable manager Amanda Boyer,  I would say first off that everyone wants to be in a happy bustling dining place where service is friendly, and everyone from young to old seem to be having a good time being there and eating favorite Italian food that is reasonably priced and best quality. A mano on fashionable Hayes Street is spacious, sun-filled and a relaxing spot inside or outdoors to people-watch the fashionable who walk by. The restaurant’s moniker, a mano, means ‘by hand” in Italian, Amanda told me, as Chef Freedom Rains makes sure all pastas are made in house.  It was fun to sit next to the open kitchen and watch one of the chefs man the pasta machine and then roll, squeeze or cut the pasta pieces in different shapes. 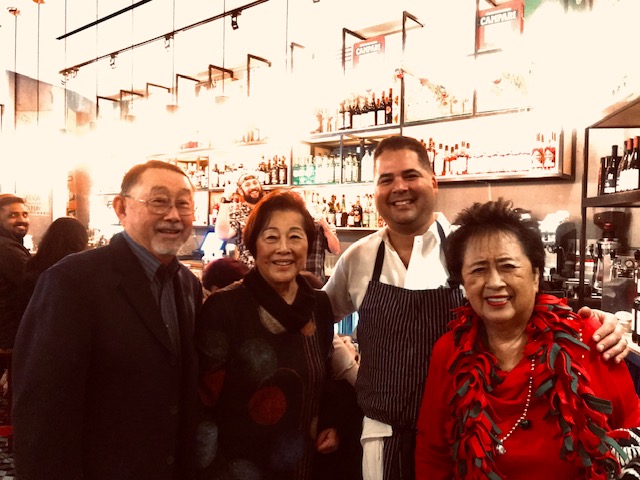 Chef Freedom Rains has truly crafted a menu of hand-made pastas and other traditional Italian dishes, having worked with many of the finest San Francisco chefs, namely Boulevard’s noted chef Nancy Oakes. I had what Manager Boyer said is one of the most popular of the pastas, the hollowed out pasta bucatini all ‘amatriciana, pancetta, pecorino.  Dining partners tried the pizza, choosing  one with guanciale, broccoli di cicco, leeks  and chili flakes, relishing the thin crust with admiring glazes. 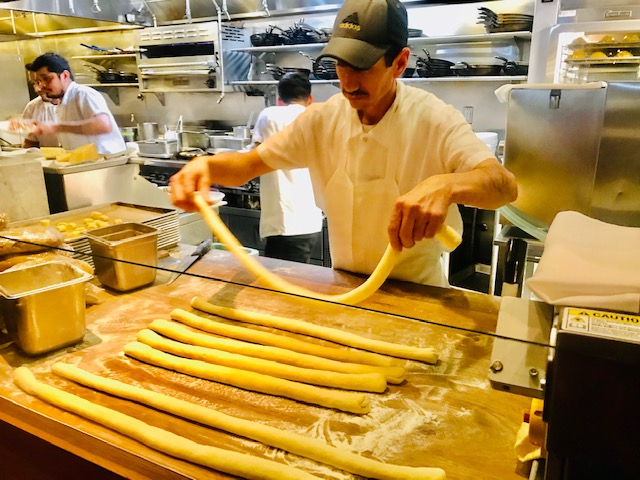 The menu changes frequently and uses fresh produce from local growers.  Chef Rains told Jim and Carole Yamaguchi and us  they have very close relationships with the fine Manquita Farm and Tenbunk Farms and strive to serve the best and freshest of all their ingredients.  I have to mention that I could see  people love to linger over the large antipasti offerings, as did we. Try to imagine our happy faces and satisfied stomachs as we savored the focaccia bread with olive tapenade, fontina arancini and honey squash, duck liver mousse with persimmon mostarda, Monterey squid served with pickled fresno chilies and butter beans, and castelvetrano olives with roman-esco.  Don’t linger any longer reading my experience and licking your lips!  Hop over to Hayes Street’s a mano to taste for yourself why locals line up daily to this popular San Francisco scene at 450 Hayes Street. 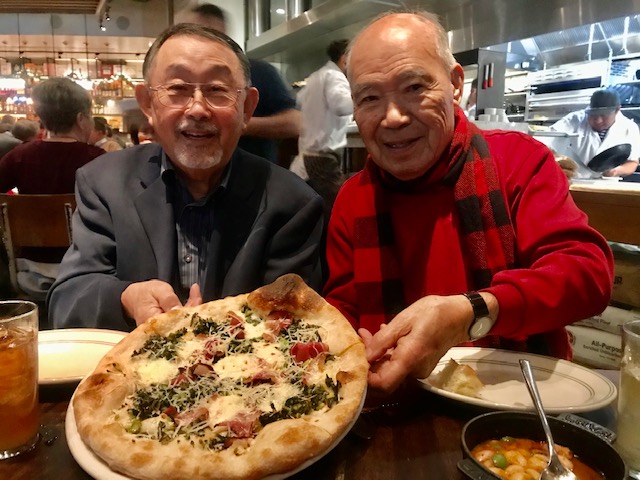 If one is in a dining mood either pre-theatre show or post-show time,  Le Colonial will be serving through January 31 a $37 timely three-course pre or post theater dinner menu with choices available on request from 5:30-6:00pm and 8:30 to closing. This old time favorite among San Franciscans has exemplified why we call San Francisco a world-class destination dining city. 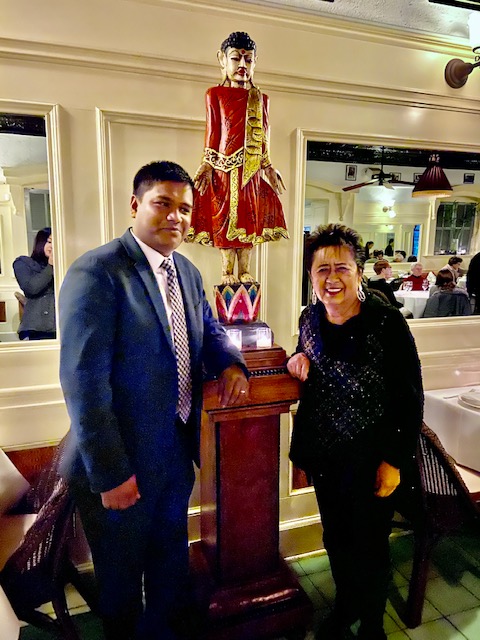 Local patrons enjoy the Vietnamese cuisine and dishes with a French flair as prepared by Chef Tuan Phan, a transplant native from Ho Chi Minh city of Vietnam.   I took my family to Le Colonial during the recent holidays and they were impressed with the atmosphere that tries to evoke the elegance of Vietnam in the 1920s.  One feels transported to an old time Vietnam when one looks around and sees the mosaic tile flooring, the vaulted pressed-in ceiling, the plush rattan furniture and the tropical plants complemented by the flickering of candlelight. Interesting vintage black and white photos of life at the turn of the century adorn the walls, while ceiling fans gently stir the air. 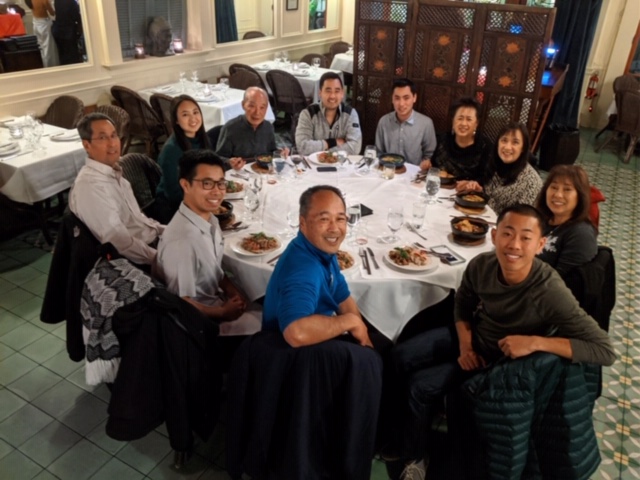 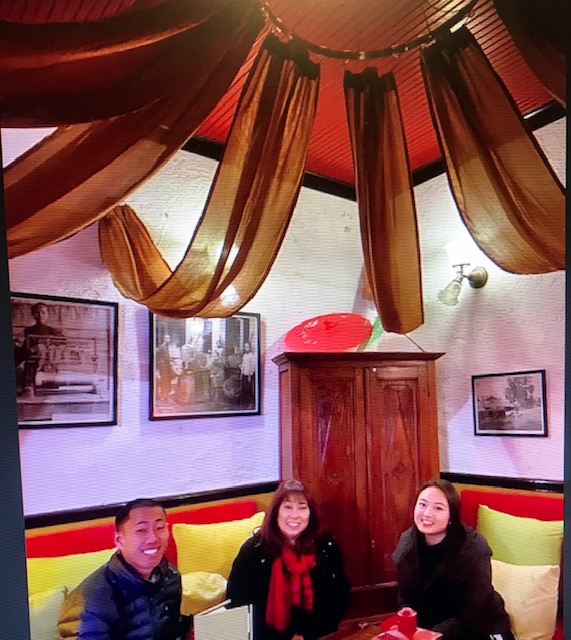 Caption: Admiring decor at 721Lounge were Garrett and DeeDee Wong and Melissa Matsuura

Although it was a rainy night when we were there, the covered esplanade that one can enter the restaurant from the back parking lot immediately evoked an atmosphere of old city Saigon.  We departed through this walkway to meet an Uber driver in the parking lot who whisked us through all kinds of traffic to our theater engagement at the Golden Gate Theatre over a mile away. If you would like to sample fare with a different French and Vietnamese combined flavor, call to reserve a spot for a special occasion in San Francisco’s nostalgic restaurant Le Colonial.  www.lecolonialsf.com.

MUSIC IN THE AIR

Van Ness Avenue in San Francisco was a bustling scene during the holidays with Christmas themed shows in Louise B. Davies and San Francisco Ballet’s Nutcracker at the War Memorial Opera House across the street from one another.  San Francisco’s stately City Hall was emblazoned in green and red lights ,  thrilling visitors to another piece of the City’s beautiful edifices. 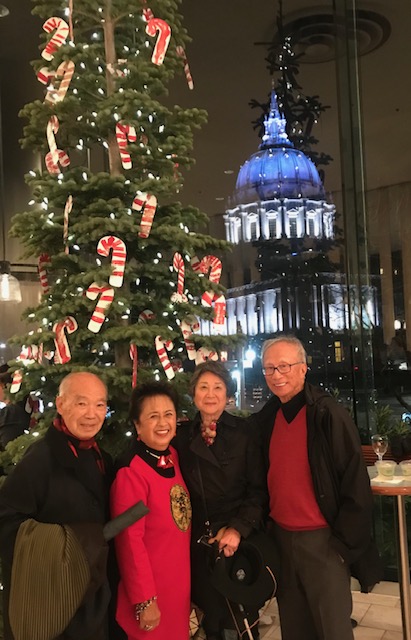 Davies Hall was decorated with eleven stately Christmas tees, all decorated by children and members of local non profit agencies. With a backdrop of the colorful city hall and the lobby Christmas trees, it was easy to catch a memorable photo with our iphones. I particularly liked the Year of the Rat decorative tree fashioned by SF Symphony Board members Margaret Liu Collins and Goretti Liu.  Great work, ladies, with all the little mice ornaments. 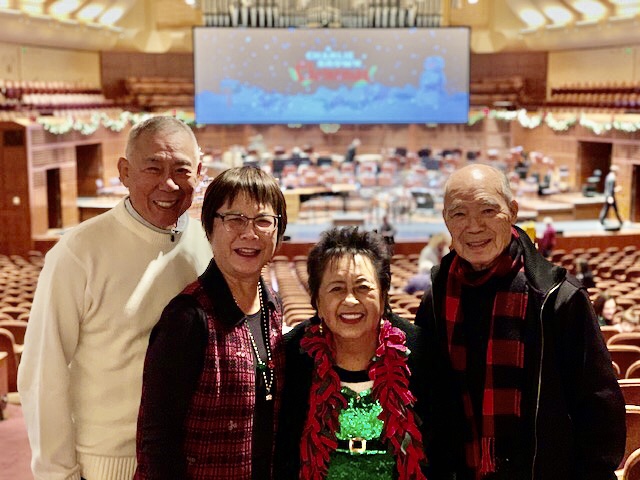 Congratulations to San Francisco Symphony leaders who catered to all ages and tastes of their audience members by selecting shows each one different from the other. One night it might be a concert featuring members of the Gay community, another featuring black artists, another having someone read the children’s story book, another having the orchestra accompanying an age old favorite movie Love, Actually, and a children as well as adult favorite, Charlie Brown’s Christmas. 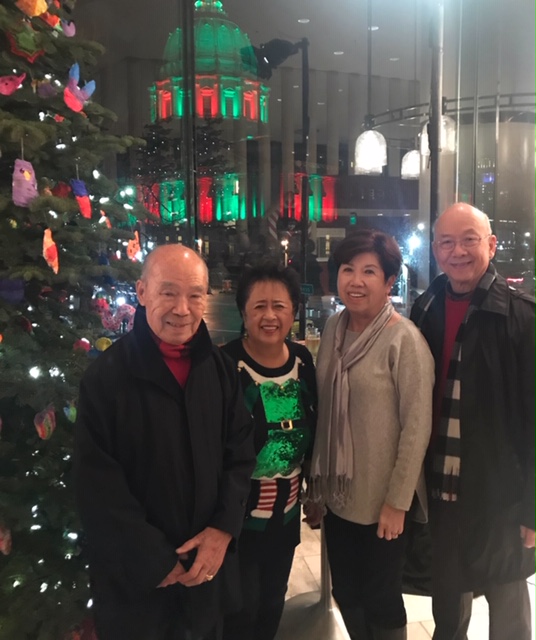 Enjoying the San Francisco Symphony Holiday Concerts this year with me were Ira and Eleanor Wong, Ralph and Julie Gin, Aaron and Maelene Wong and Franklin and Sandra Yee. Upcoming in February is the SFS Chinese New Years celebration with a Chinese concert and Imperial Dinner.  Lively music and appearance of the stately Lion dancers is usually there to start off the festivities with a big bang of the firecrackers.  www.sfsymphony.org. 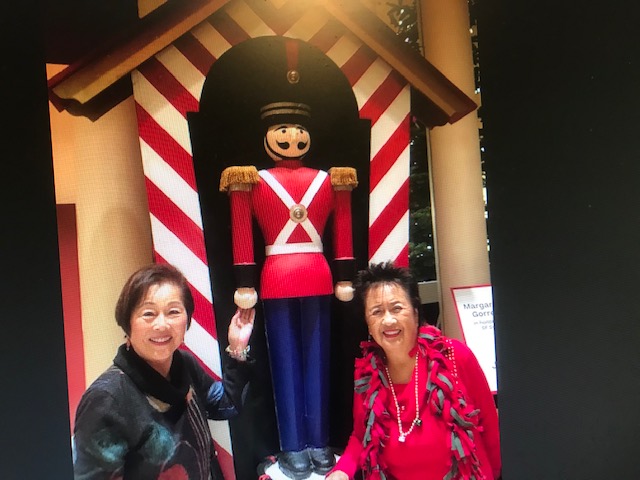 Looking for a little more excitement than the same old Chinese banquet with a few boring speeches to celebrate the Year of the Rat.  Then come to San Francisco Clarion Performing Arts Center in the middle of Chinatown on #2 Waverly Place and enjoy burlesque performances by noted Asian American performers February 1-2. 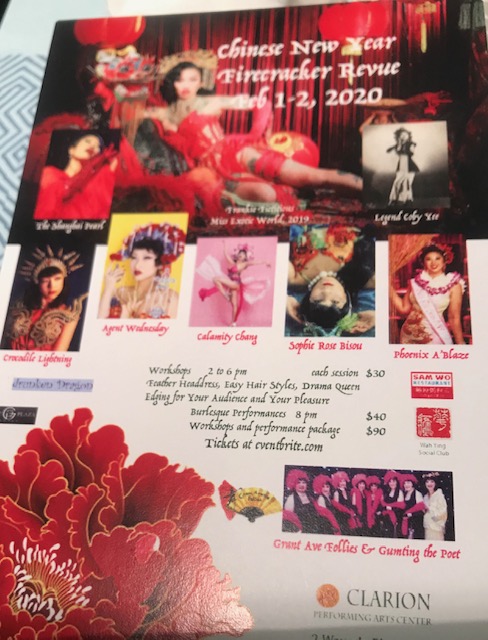 Be entertained by seeing close up in the Clarion’s intimate setting Miss Exotic World 2019 Frankie Fictitious, Legend Coby Yee, Crocodile Lightning, Agent Wednesday, Calamity Chang, Sophie Rose Bisou, Phoenix A’Blaze, and the Grant Avenue Follies and Gumting the Poet.  Sound like something worth coming to San Francisco for – you betcha so fire up those firecrackers for a rip roaring TIME!

MUSIC IN THE SOUTH BAY

For a more sedate evening of performances, a new musical SHE LOVES ME opens in the Saratoga Civic Theater February 25-February 15.  This is a warm romantic comedy, and widely touted as a perfect musical as it’s charming, romantic and something the whole family can enjoy as love triumphs over animosity.  Presented by South Bay Musical Theatre, this show has enjoyed two successful Broadway revivals, the most recent in 2016. 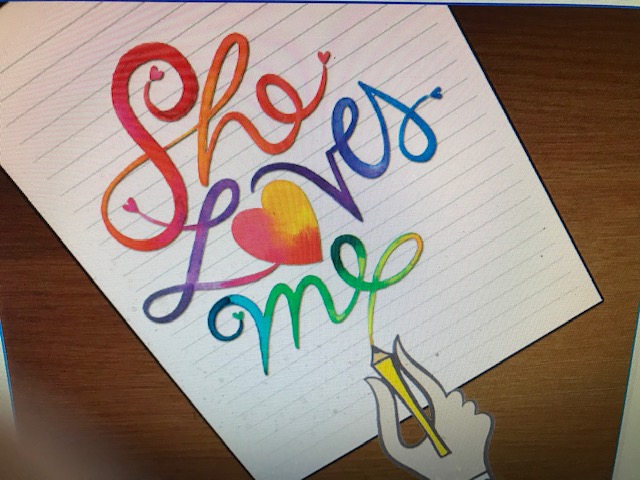 South Bay Musical Theatre was founded in 1963 and is now in its 57th year of entertaining Bay Area audiences as a non-profit organization, so it’s fun to go out and support local theatre while having a great evening of musical entertainment besides.

Champagne will flow post performance for first nighters of February 25 so go online to get your tickets now. www.SouthBayMT.com

Our favorite local California State Assemblyman EVAN LOW  is sending out an enticing invitation to join  him at his annual Lunar New Year Dinner come February 7 at the San Jose Dynasty Restaurant.  In previous years, he  has attracted a crowded room full of solid supporters who are pleased with the work he has done in the State Assembly for his district, our area, and the state.  This 2020 he is promising a special celebrity guest to appear at the dinner – so be on the lookout — who is it, Evan???? – J Lo or Celine or Brad Pitt?  He just says it will be a “big name” at  this “presidential-esque” event!   Oh oh – whoever, presidential, past, present or future will be a special surprise so for curiosity’s sake,  don’t miss out!! For insider info try :  evanfor assembly@gmail.com and tell us if you find out the secret guest.

The holidays came and went before I could even report on some of the events happening then. 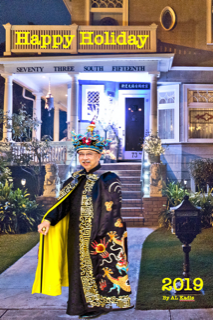 Caption:  Nathan Louie in his Beijing Opera Wardrobe welcomes all to his home

So looking back, former San Franciscan Nathan Louie’s annual party goes on rain or shine as he outfits his garage and adjoining covered patio with heaters and lights for the some 75 guests he welcomed to his Victorian home in inner San Jose. 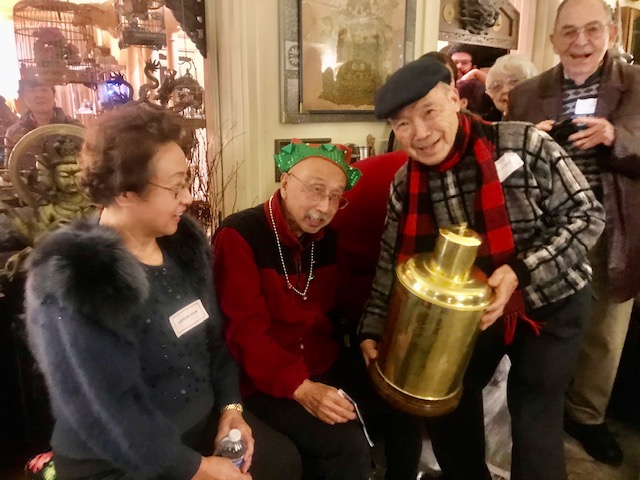 Caption: Calvin Wong shows Party Host Nathan his winning prize before someone stole it away from him.

The Gods looked kindly down as rain halted while Nathan and sister Madelene welcome all with a hearty meal, and a fast and furious open and steal the present game with fun for all.  Everyone recognizes Nathan for his elaborate Beijing Opera costumes he dons to welcome everyone at all of the Asian Film Festivals in the area. 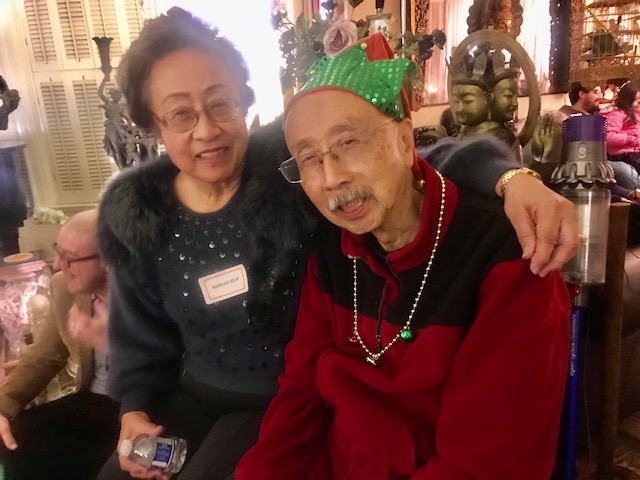 CHINESE HISTORICAL AND CULTURAL PROJECT celebrated the end of the year with a chef cooking special dinner at San Jose’s Genji Restaurant. Seated at one table with their own private chef preparing food for their table were Liz Chew,   Anita and Yucaipa Kwock, Frances and Steve Quon, Judy Wong, President Dave Yick, and Erwin Wong. 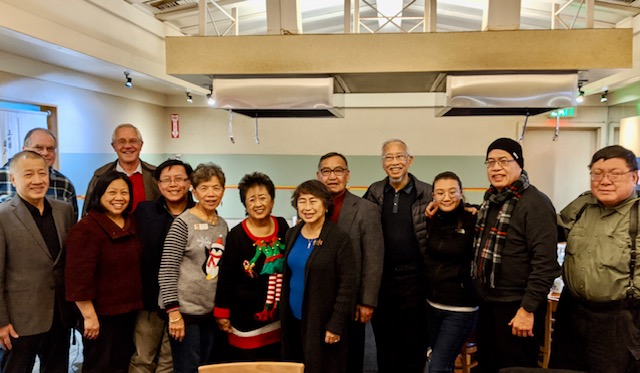 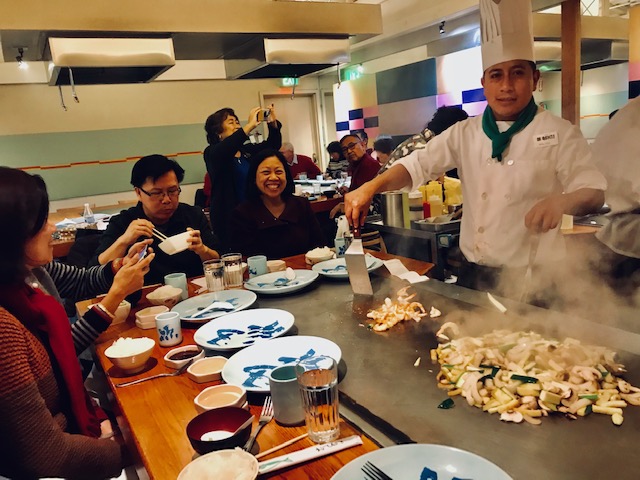 An occasion of holiday fun and food was enjoyed by all of the hard working volunteer Directors who serve diligently to keep the CHCP’s Museum of Chinese American History in Santa Clara Valley alive and well since it opened in 1991.  Kudos to CHCP volunteer Board. Anyone interested in joining this dedicated group who say they receive many wonderful experiences working with other Asian Americans wanting to present, promote and preserve our Chinese American culture and history.  The upcoming  2020 Membership meeting is January 13, Monday at the China Stix Restaurant in Santa Clara.  If interested in attending and joining, I, as co founder welcome  you all . Call 408 507 1042 or  www.chcp.org 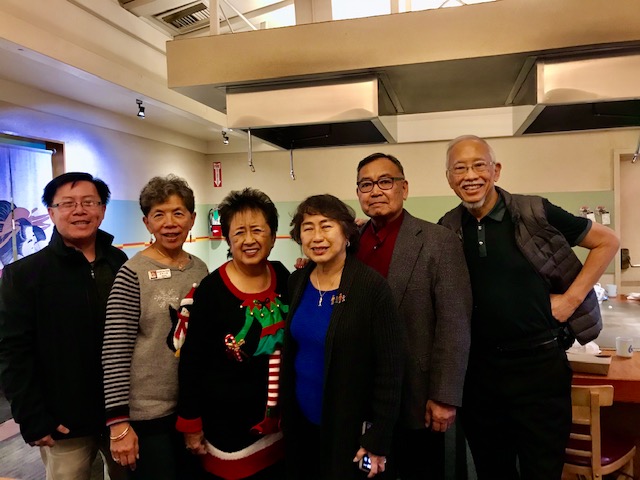