When the usual traveler thinks of going to Japan, they consider the big noted cities like the metropolis of Tokyo, historic town of Kyoto and atomic bomb site of Hiroshima.  However, the Princess Cruise Line devised an itinerary for their Diamond Princess ship to venture to little known smaller cities for its cruisers to experience. This new itinerary attracted many new travelers, for the voyage I embarked on had over 700 Australians, 400 Americans, and 1200 Japanese citizens themselves. 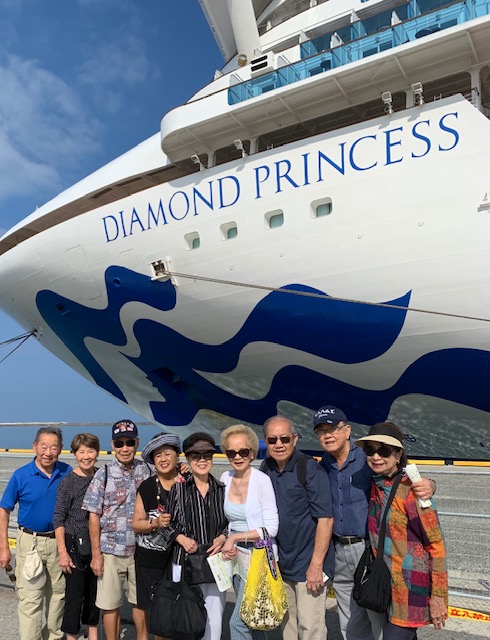 Coming on Board for Diamond Princess cruise through Japan.

As Diamond Princess Captain Gennaro Arma explained when welcoming passengers to his Captain’s Night party, this itinerary is n opportunity for the Japanese people themselves to visit easily other parts of their country not as easily accessible by train, their usual mode of transportation in domestic travel. This particular voyage, he announced welcomed actually two Australian passengers who had traveled on Princess Cruises for over 800 days and won his prize for being the most prolific Princess fans on the ship. 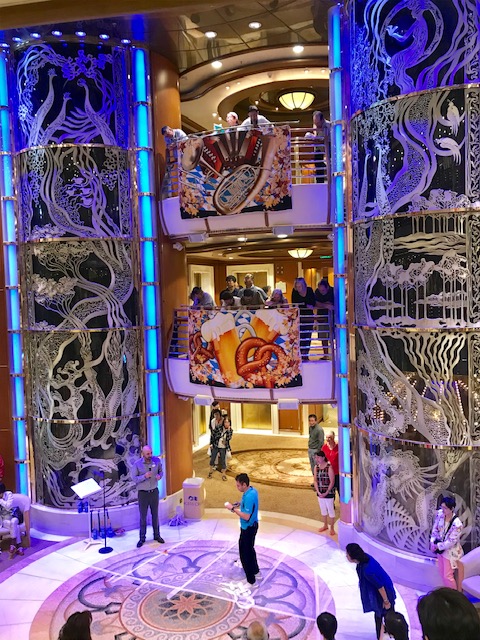 Our group of 13 California Chinese Americans were cruisers who enjoyed the quaint Japanese villages on this route and seeing the countryside in a relaxed manner. Because over half the ship was occupied by native Japanese people, every announcement was made bilingually in English and Japanese so everyone could feel comfortable knowing what was happening in each activity.  For us English speakers, this oftentimes became tiresome but this cruise is definitely geared for the native Japanese traveler, so understandable. In fact, Hotel Manager Chris Northduft  and Entertainment Director Catherine Desbuqois told me the two  subsequent cruises following ours would be over 90% to full capacity of only Japanese passengers. 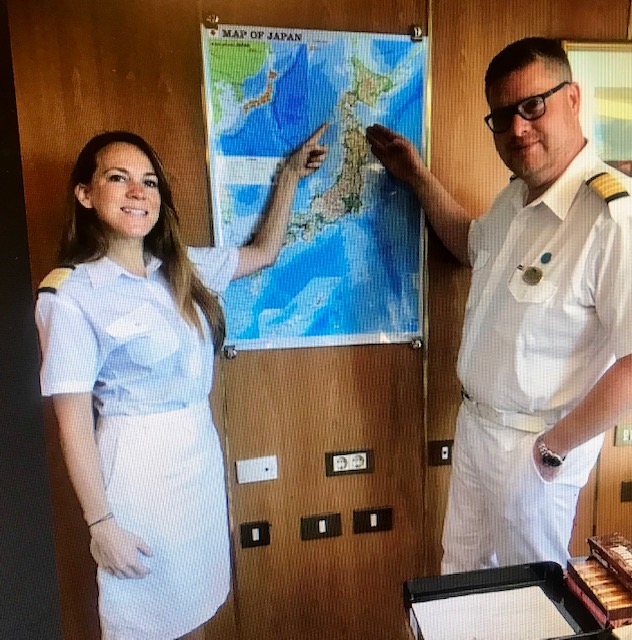 The Princess Line’s goal was not only to have activities enjoyable to the Japanese clients but to bring some of the Japanese culture to the others.  As such, there were offerings of classes on origami, Japanese dance, foods, calligraphy, and a furoshiki class, the latter making cloth wraps for bottles. As Catherine explained, the Japanese guests were excited about this ship’s itinerary as well as seeing their culture enjoyed and shared with fellow passengers. 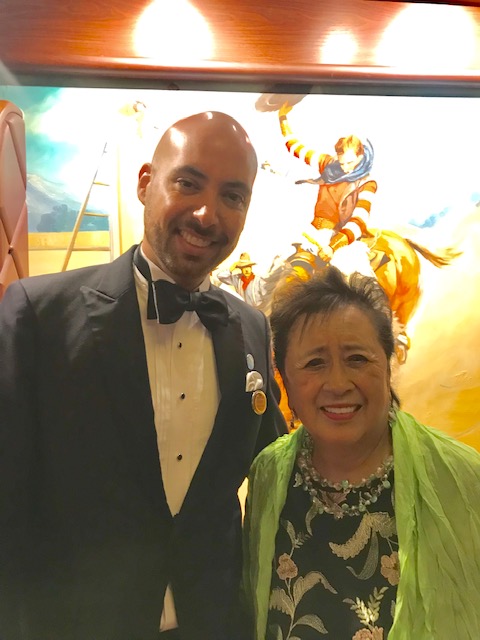 For our group, however,  we enjoyed the amenities of being  Princess Cruise Line passengers. For Pat Hing and us in Premiere Suites, we enjoyed the privilege of dining in special suite only restaurants, hors d’oeurves delivered to stateroom nightly,  priority disembark privileges at each port, and double verandah and cabin space. Calvin and I enjoyed keeping in touch through Princess Suite amenity of 500 Internet minutes and of course, unlimited laundry services. 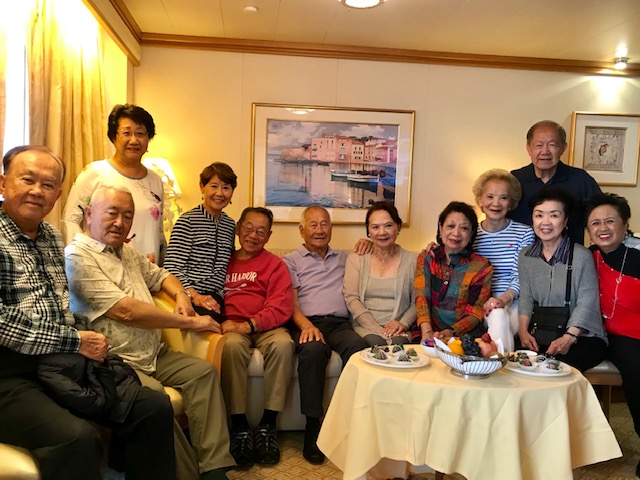 For Elite Princess class passengers the Lane Lees, Howard Cheungs and Howard Setos, they were seen enjoying samplings of the many Japanese delicacies on the Horizon Buffet tables, and especially the sushi and noodle making stations. One night our very efficient and gracious travel group leader Pauline Lee treated all to the Italian Specialty Restaurant Sabatini to celebrate Rosemary Cheung and Calvin Wong’s September birthdays and the waiters all appropriately serenaded them led by our own Dining Room Manager Diego. 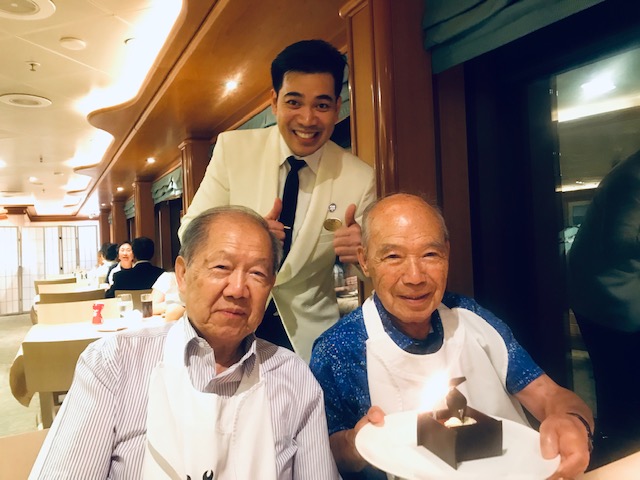 Muriel and John Kao enjoyed visiting the coastal city of Toba, our first port in southern Japan.  Especially interesting was a demonstration of the “ama” women pearl divers at the Toba Aquarium.  As our ship cruised south, we stopped at Busan, Korea where Princess bus shuttles drove us into the center of the International Marketplace.  There the sights, sounds and smells of interesting food stalls intrigued us all with their dishes cooked right on the spot of all kinds of seafood. 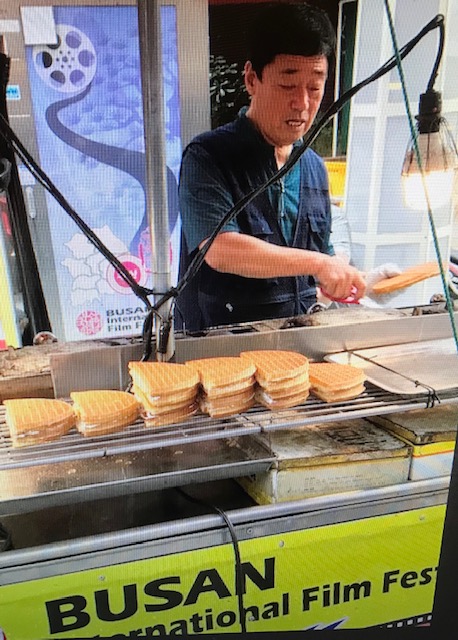 The ship had many tours to take one to see ancient temples, mansions, historical buildings and museums, even though each port city like Takamatsu and Sakaiminato are fairly small coastal villages with the principal activity being fishing. Everywhere we found the Japanese people friendly and although most had limited English, they all tried to be helpful when we asked questions. Takamatsu had a special botantical Japanese garden which we enjoyed walking within. 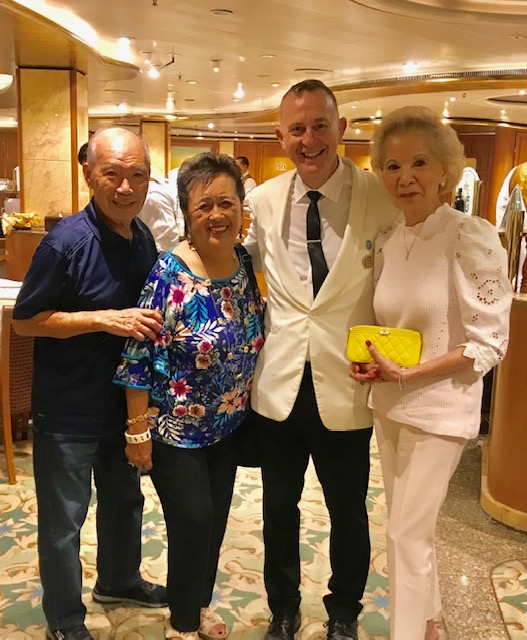 Dinner on board ship is planned by Dining Captain Diego

In Kanazawa, the Ritsurin Garden is considered one of the most beautiful in Japan, so it was a pleasant walk to see beautiful pine trees, numbering over 1000 and some over 300 years old. 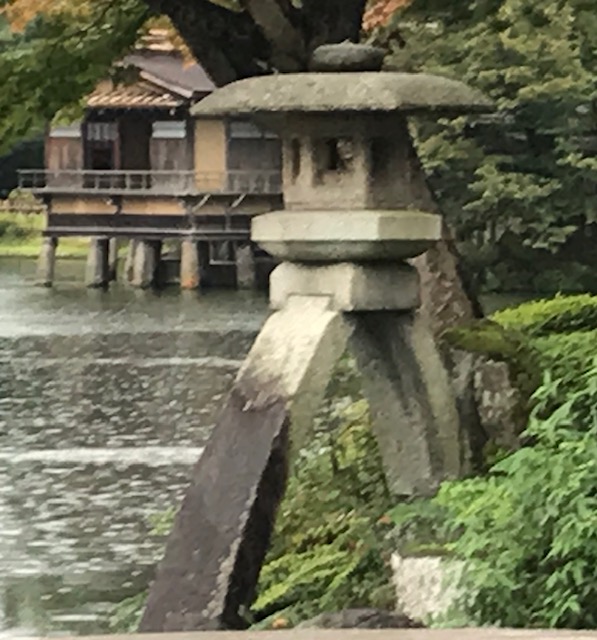 Kotojitoro lantern is shaped like the bridges on koto instrument

Adjoining the garden our Princess Cruise Line sponsored tour walked to the Kanazawa Castle, dating back to 1546 when a religious school of the Honganji temple was founded. Once used as an army base until the end of WWII and also once served as the campus of Kanazawa, the accompanying Kenrokuen Garden had a popular photo op at the Kotojitoro Lantern, said to be named as it is shaped liked the bridges that support the strings of the musical instrument the “koto”. 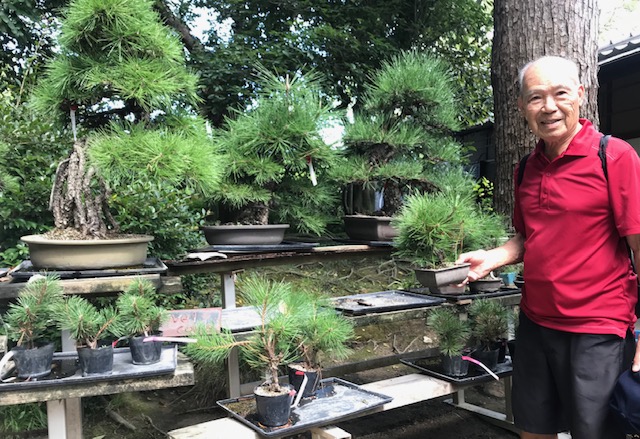 Two days at sea was perfect for this 9 day cruise to just relish in the Diamond Princess’ many activities.  If you were a trivia fan, there were daily sessions. Of course every shop had sales constantly luring the ladies, and there were standing room only packed audiences for the Princess Musical Production shows.  I liked seeing the ingenuity of many Japanese cruisers who entered the Drop the Egg three floors down to atrium floor contest, some improvising parachutes and one even using a miniature umbrella to soften the fall. 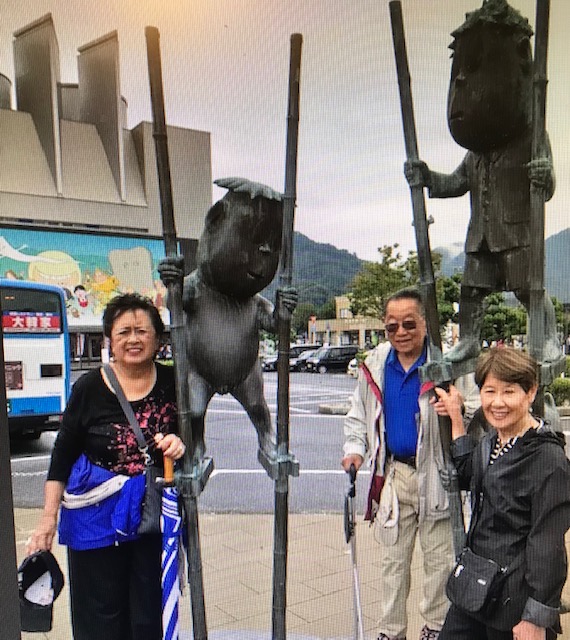 Phyllis and Steven Gee enjoyed seeing the many whimsical statues decorating the streets of Sakaiminato , the works of hometown Japanese manga artist and historian Shigeru Mizuki. Obviously these quiet little towns are eager for the cruise ship passengers to descend to help their economy and many had numerous souvenirs to sell of Japanese products.  It was a festive time for all of us to come onto our balconies as we departed as a dance band played popular American songs to wish us farewell on the pier.  This was a nice endearing gesture each small town seemed to want to show their friendship with music as our ship would pull away from the dock. One even had an udon booth set up on the pier with free bowl for all returning passengers to enjoy their specialty dish.

The ladies in our group enjoyed the small pedestrian street in our last port city, the city of Sakata, on the northwest coast of Japan’s Honshu Island where many charity non-profit organizations had arts and crafts displayed for sale.  Some of us picked up ornate gold embellished antique Japanese obis which make beautiful dining table runners at home.  Fun loving ones supported an elderly man who had Japanese samurai clothing and swords for us to don for funny action photos.  We will all remember the citizens of Sakata for a troupe of 60 kimono draped dancers performed on the pier as their token of forewell when our ship sailed away. 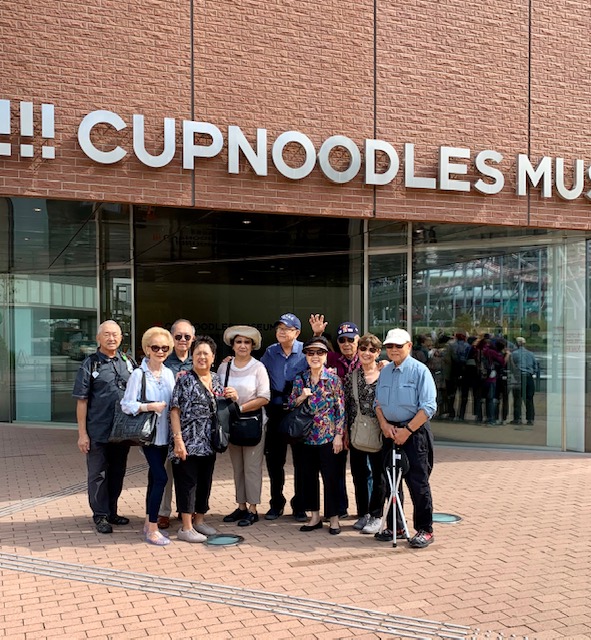 Sightseeing in Yokohama at Cup of Noodles Museum

Our cruise began and ended in Yokohama, so we had a chance to visit the city’s large Chinatown which is always jam packed with local visitors on a typical Sunday, according to a friendly young man. When our three taxis seemed to drop us off at three different locations, we desperately looked for someone to ask him for directions to the chosen meeting place of the Chinese temple. The kind young man saw our helplessness in trying to find our way to the area’s famed temple meeting place,  and apologizing for his limited English, said to follow him and he would actually lead us to the Temple, four blocks away.  Now that gesture of friendliness will always be a highlight in my mind of this brief visit to Japan.  Would any American do the same for a visitor here, I wonder? 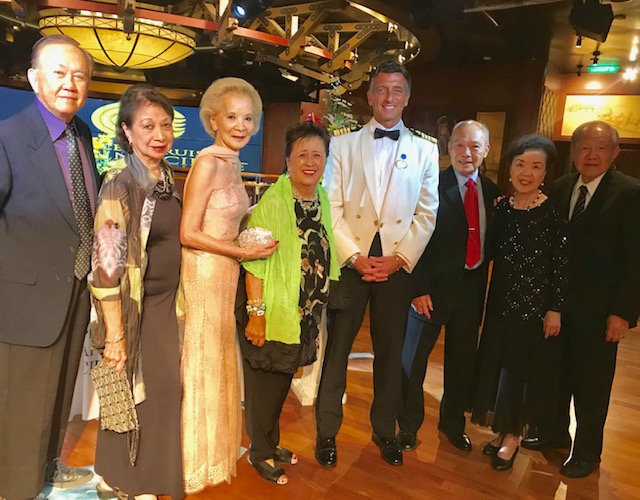 Thanks to Princess Cruise Lines, I come away with a different perspective of Japan having seen its countryside and visited its out of the way small villages.  If one wants a relaxed mode of traveling, of course it is via cruising where one only unpacks once, has unlimited entertainment provided any time, and of course, has places all over the ship to enjoy drink, massages, pool activities and definitely all kinds of food opportunities!   Bon Voyage! Farewell to Japan. 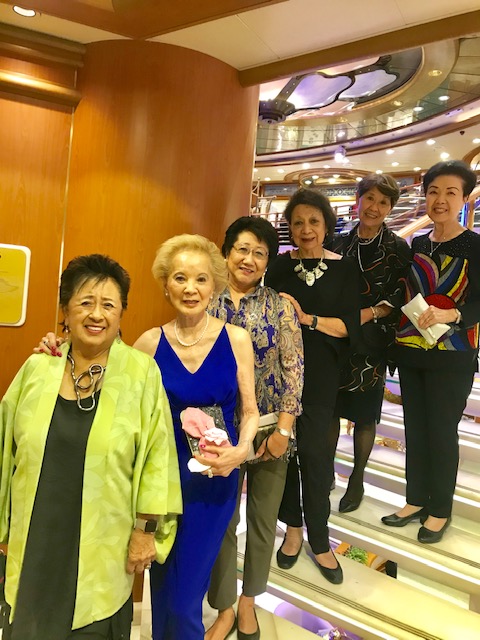 At the Magic Theatre’s Fort Mason Location, the first production of   the Company’s 2019-2020 season will be the Bay Area Premiere of Lloyd Suh’s THE CHINESE LADY  which  opened October 9 with previews.  The show will continue  through to November 3, with grand opening on October 16.  Inspired by the story of the first Chinese woman to arrive on American soil, THE CHINESE LADY follows Afong Moy after she is brought from China to America and put on display for an eager public yearning to learn of the exotic East.  As the New York Times once pointed out,  “ we see at Afong whole centuries of American history where she is no longer the Chinese lady.  She is us.”  Ticket Info:  Online: MagicTheatre.org; 415 441 8822 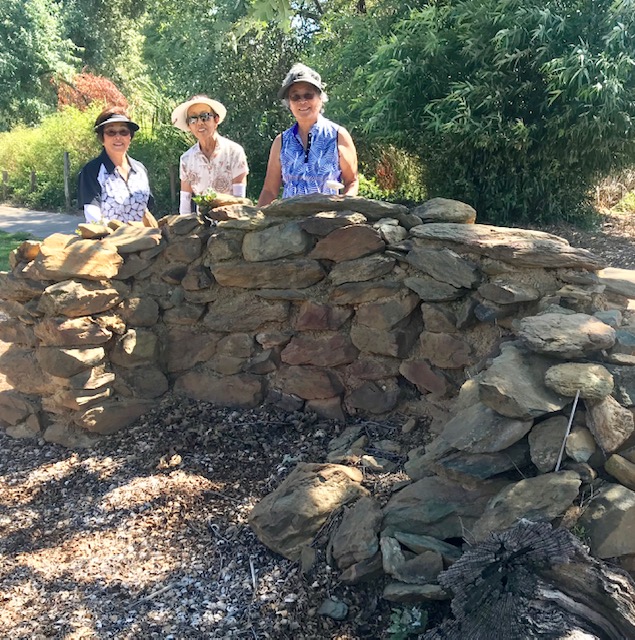 Remnants of an 18002 stone wall built by Chinese miners living there was discovered on one of the fairways.

Foon Hay Golf Club golfers took a two day retreat to Copperopolis gold country area to compete and eat, according to President Fran Gin, the organizer.  In spite of an unseasonable downpour which soaked the golfers for a couple of holes, club organizers Willy Yichoy, Victor Gin, Ron Wong and Carole Yamaguchi threw a welcome BBQ lunch, and the fun times ended with a second sunny day of play and a happy meal at an Angel’s Camp Chinese restaurant. Highlight for our golf group, Pat lUm , Alice Liu and myself,   was seeing a stone wall that had been Chinese Miners kitchen in the 1800s when Chinese laborers had lived and worked in this Gold Country area still standing on one of the golf course fairways. 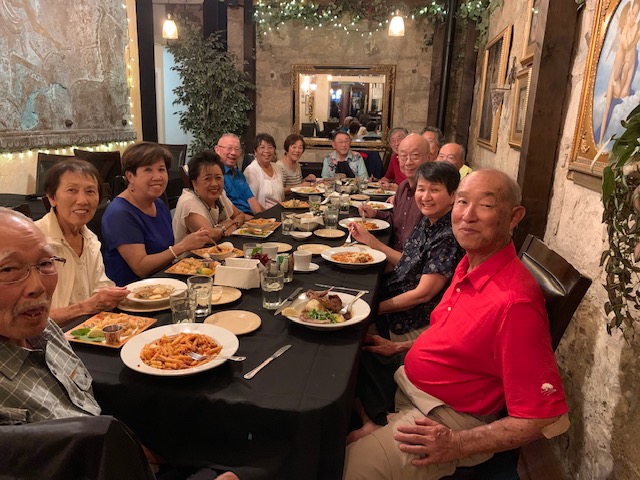 Foon Hay diners after a fun day on the golf course

Check Foonhay.org website for lists of winners and new activities going forward. Seen enjoying a day in the country seeing Chinese historic sites with the club were members Henry Lius, Chuck Leongs, Mike Houlihans, Clarence Bakken, Aaron Wongs and Ralph Gin. Newcomers fifty and five and over are welcome at future tournaments by contacting officers at the website.