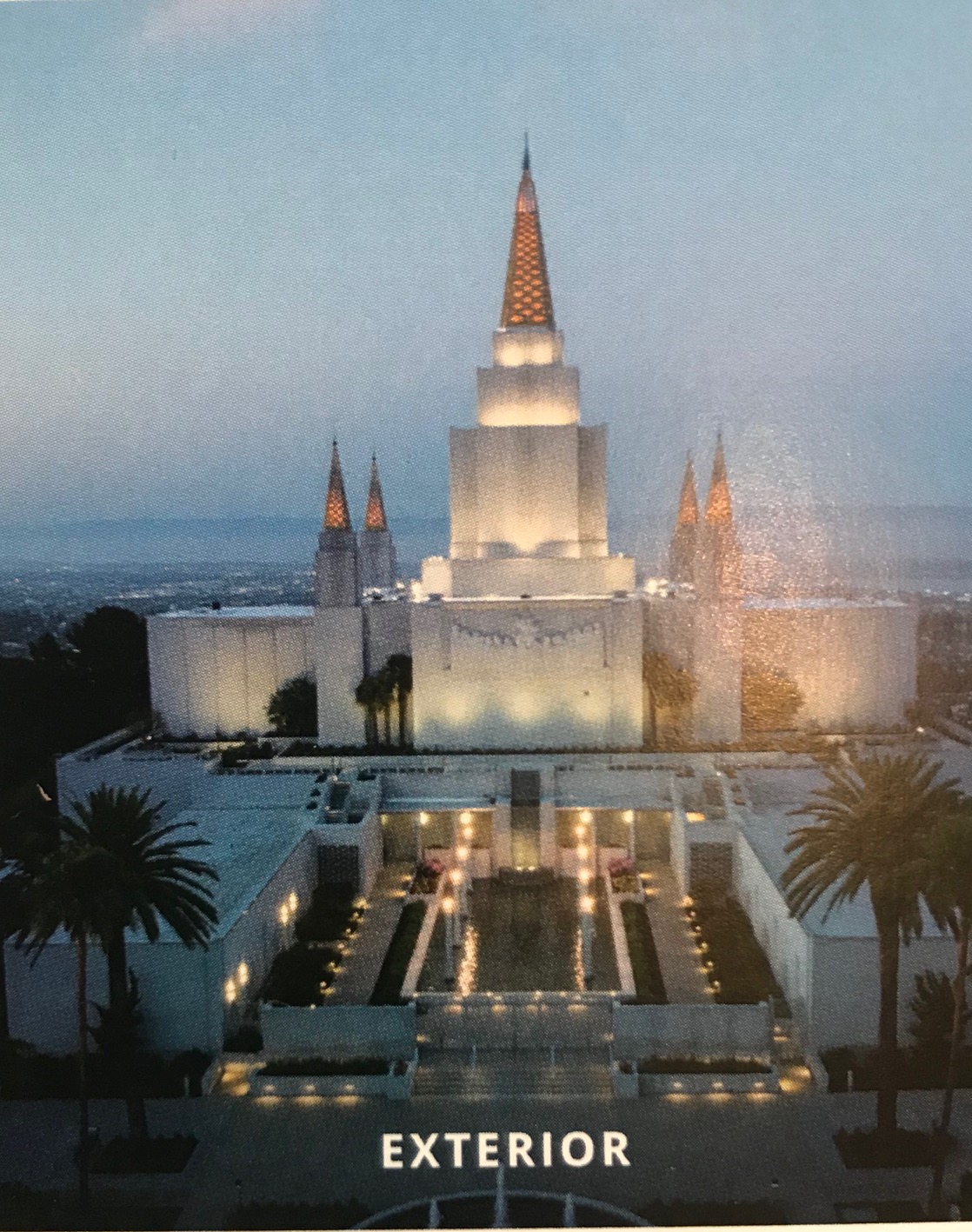 MAY EVENTS AROUND THE BAY

MAY EVENTS AROUND THE BAY 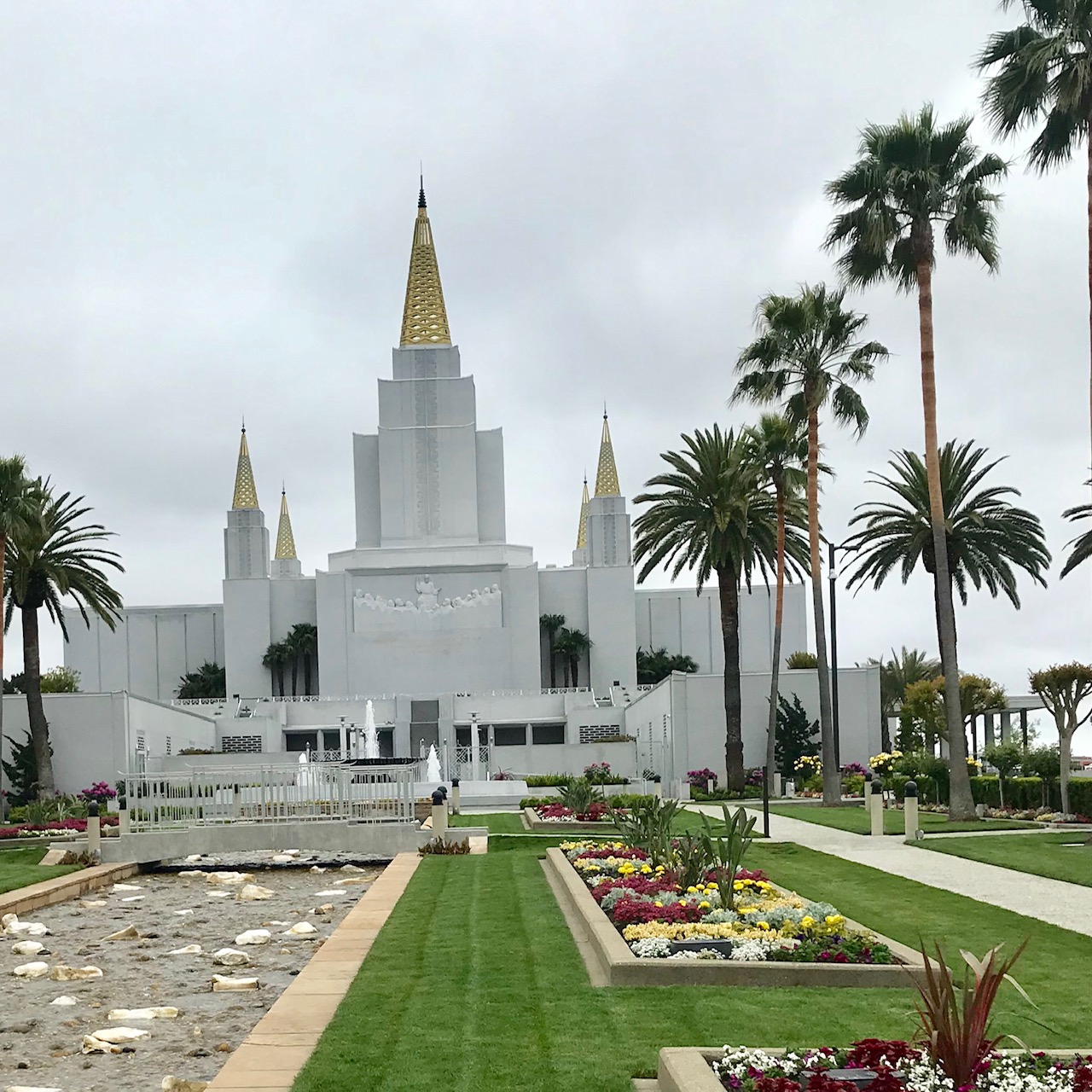 Anyone driving from San Francisco to Oakland in the evening has, no doubt, been mesmerized by the sight of a shining beacon in the Oakland hills. That light emanated from the Oakland California Temple, a monument and symbol of the Church of Jesus Christ of Latter-Day Saints in the Bay Area.  When it first opened in 1964, a public open house of the newly constructed temple was held over a five-week period, and at that time, I joined almost 400,000 people who had the privilege of touring the temple then. It’s hard to believe that was 55 years ago. 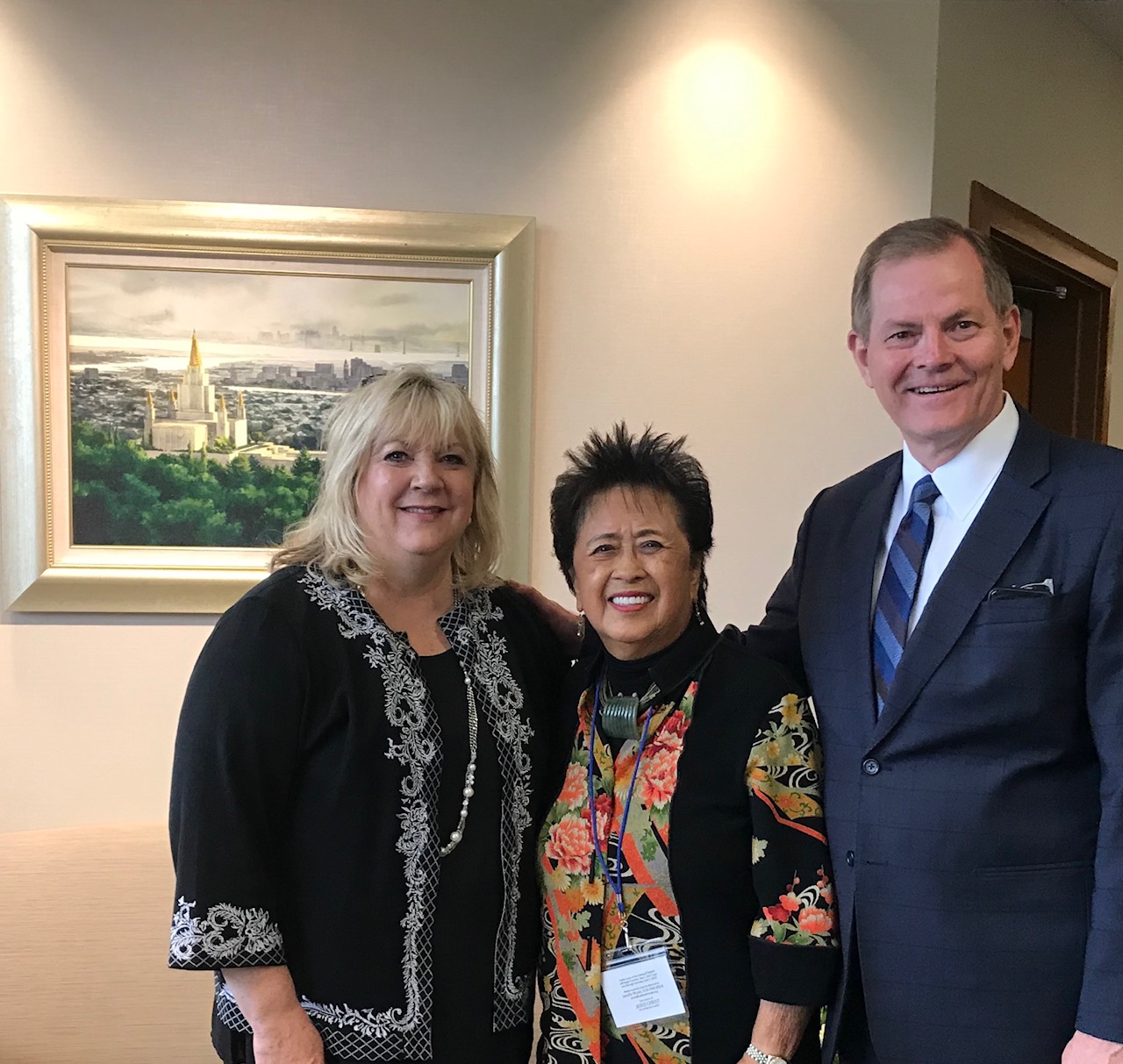 Since then, it had only been opened to accredited members of the church, until now. Following a one year substantial renovation, the temple will again be open for three weeks for public tours, the first time the public has been invited inside the temple since 1954.  I was privileged to join a tour led by Elder Quentin Cook, a member of the Quorum of the Twelve Apostles of The Church of Jesus Christ of Latter-Day Saints and Elder Larry Wilson, General Authority Seventy who currently serves at Church headquarters as the Executive Director of the Temple Department. Also had the pleasure of meeting SLC Media Relations Manager Irene Caso, whom I hope to meet next week when I am at the Golden Spike Conference, celebrating the 150 year anniversary of the completion of the Transcontinental Railroad in Promontory Point, Utah. 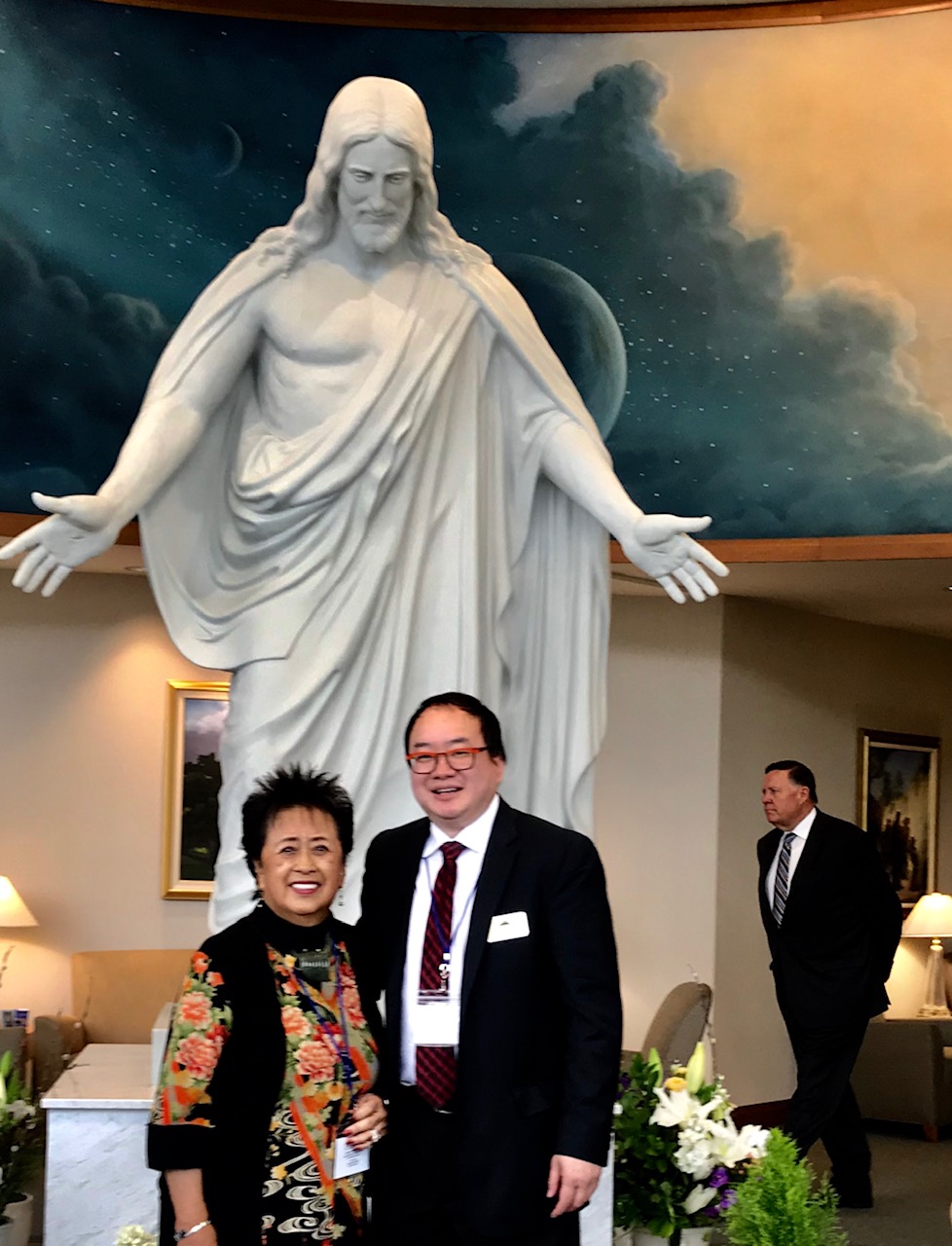 Unlike traditional cathedrals and Asian temples, which generally have one large main room where followers worship, this Mormon Temple is a maze of many small rooms, each with its own purpose and function.  One room is the Baptistry Room where baptism ceremonies are held in an elevated pool, the base of which is held up by 12 oxen, reminiscent of the tale of Solomon’s temple.   Other rooms I saw were the Sealing Room, where couples, all attired in white, are married in a ceremony called a sealing sacrament to eternal marriage. 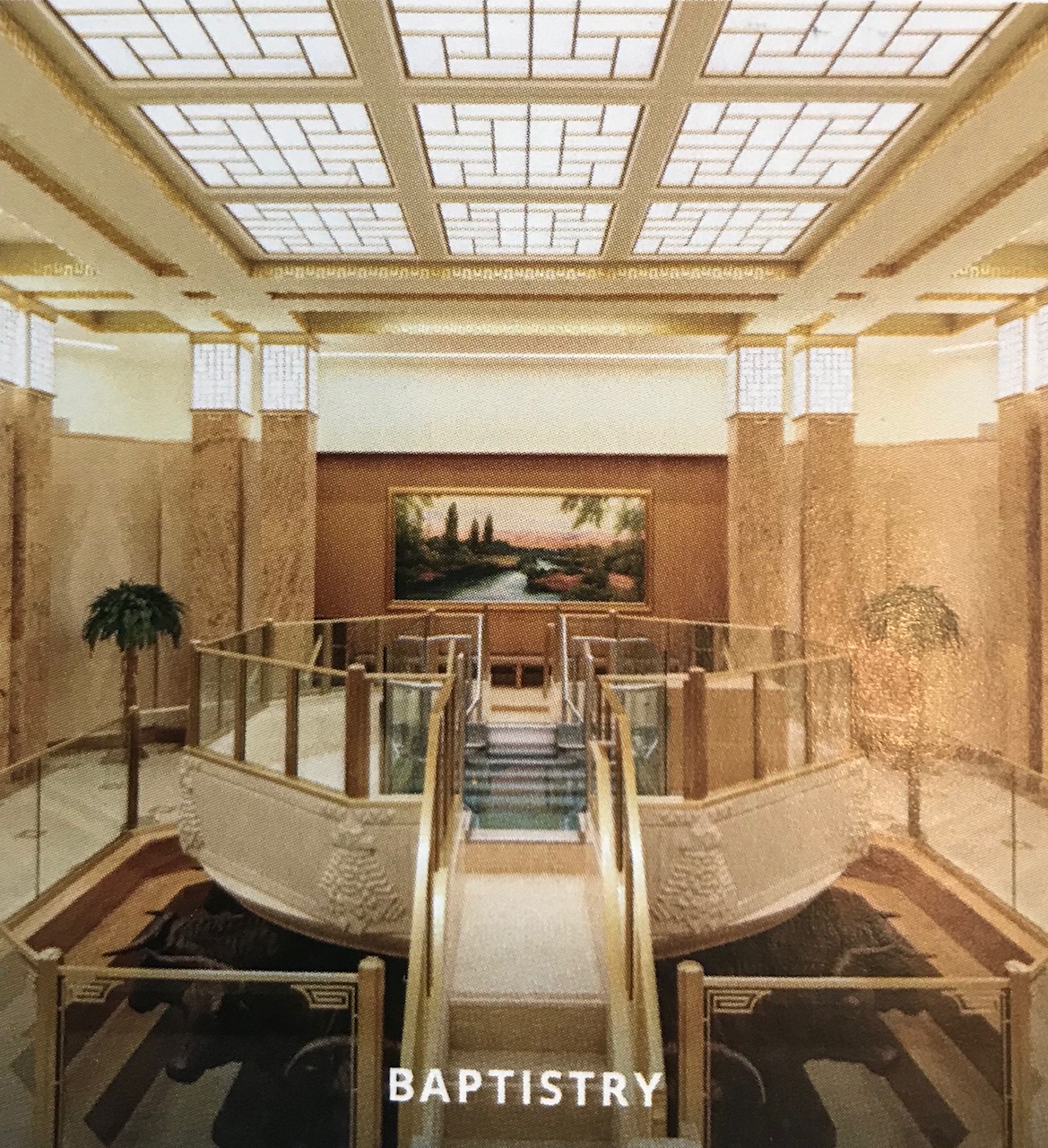 Other tastefully decorated rooms, each with its own unique function or purpose, were the Instruction room, the Bride’s room, and the Celestrial Room, the latter of which people go to meditate and reflect on themselves and their religious beliefs in quite solitude. The building will be rededicated on June 16, after which it will again only be opened to its parishioners with special permission credentials which would entitle them to visit any temple throughout the world. In the past the Temple has been visited by up to 1000 of its church membership daily with many of the services done in various languages on audio. 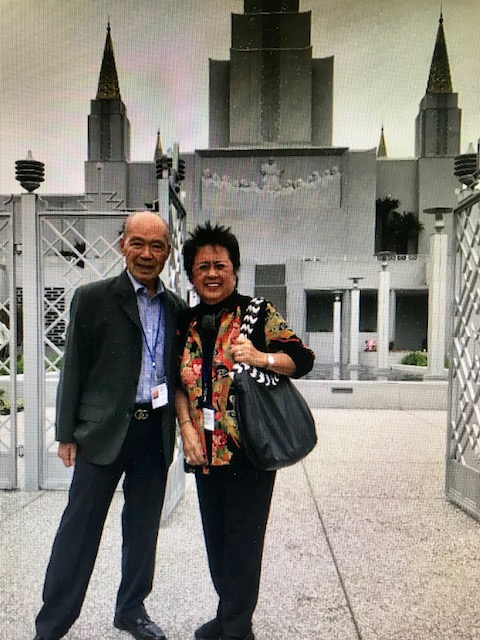 The beautiful building, all 80,157 square feet of it, is monolithic and minimalistic, with little ornamentation, with its exterior appearing to have been carved out of one monolithic stone, and faced with Sierra white granite. The five spire design, seen from miles away when lit up at night, hints of buildings of far-eastern origins such as the Taj Mahal and Cambodia’s Angkor Wat in Cambodia, and reflects the diversity of the residents in the area.   The public is invited to tour the newly renovated Oakland California Temple from May 11 through June 1 between 9am and 8pm daily at 4770 Lincoln Ave, Oakland, CA. For reservation appointments assistance, as massive crowds of curious onlookers are anticipated, call 855-537-2000 or make your reservation through www.templeopenhouse.lds.org.  Don’t miss this wonderful opportunity to visit this impressive structure and an opportunity to learn more about the history and beliefs of the Church of Latter-day Saints during the next three weeks following restoration.  That opportunity may not come again for another 55 years.

The Church of Jesus Christ of Latter-Day Saints history dates back to its formation in 1830. By 1896, the membership totaled a quarter of a million, the majority In Utah. It reached one million by 1947. Currently at the end of 2015, the worldwide membership of the Church stood at 15.6 million members, with fewer than 45% living in the United States. Latter-day Saint Temples differ from the meeting houses or chapels where members meet for Sunday worship service.  Temples are considered “houses of the Lord” where Christ’s teachings are reaffirmed through sacred ordinances that unite families for eternity. 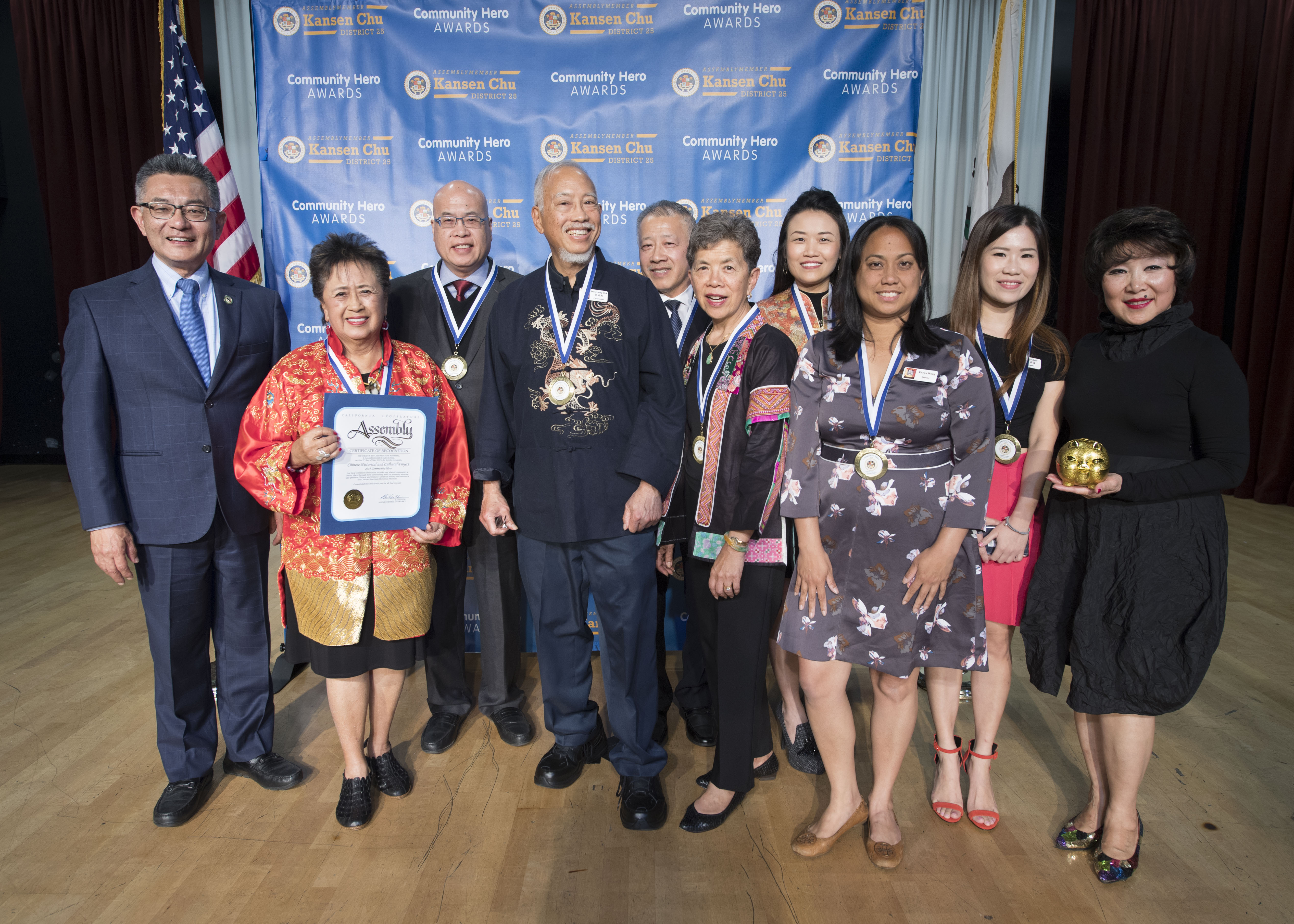 A tradition that Assemblymember Kansen Chu started when he was a Councilman for the City of San Jose was an event honoring Community Heroes.  This  year, Chu honored over 80 individual and organizations for their contributions to the community in many different venues. Over 500 came to the India Community Center of Milpitas to acknowledge and herald those chosen.

As Kansen and wife Daisy said to me that evening, “We like thanking the individuals who work, live or serve in his 25th Assembly District to honor their dedication and strong commitment to public service and improving our community.” 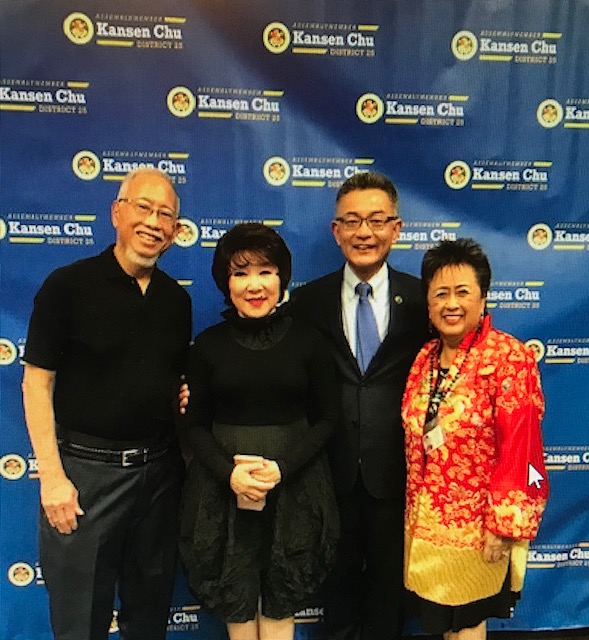 Greeting old friends Daisy and Kansen Chu who were once Advisory Board members when CHCP was first founded.

Among the Heroes chosen this year was my CHINESE HISTORICAL AND CULTURAL PROJECT, the group I co-founded with Lillian Gong-Guy to preserve and promote Chinese American history through the restoration of the original Ng Shing Gung temple building and restoring it into a Museum of Chinese American History. In 1991, when we opened the building, having built it on City of San Jose grounds designated to show what San Jose looked like at the turn of the century, the CHCP gifted it to the City of San Jose as a contribution from the Chinese American Community of Santa Clara Valley. 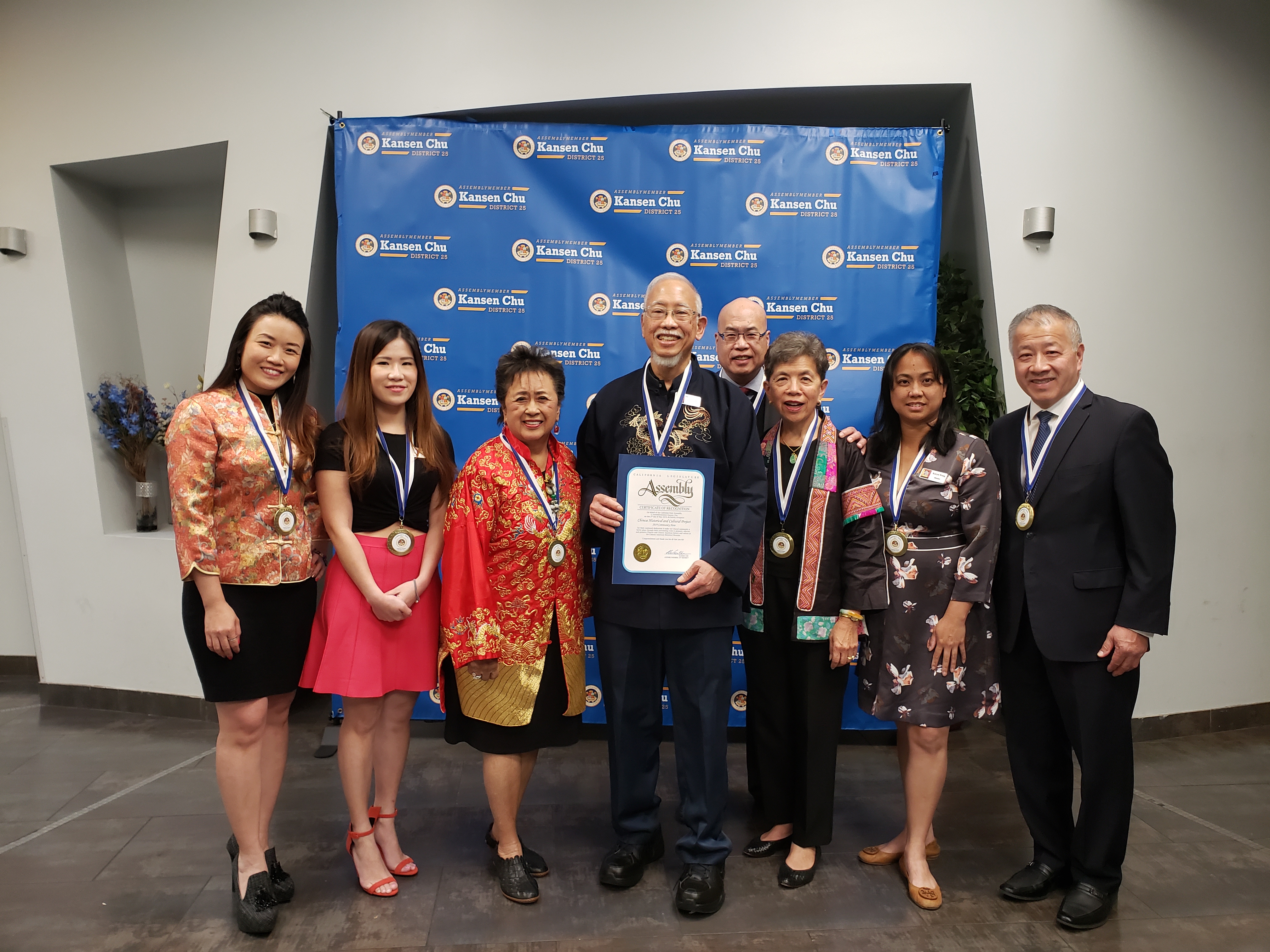 Representing the CHCP on stage when Kansen presented a Community Heroes medal to each, were President Dave Yick, Vice President Pinki Fung, Trustee Gerrye Wong, and Board members Kelly Chew, Karyn Wong, Peter Young, Brenda Wong, and Erwin Wong. As a thank you, I presented Daisy and Kansen, a golden piggy bank to wish them a happy and prosperous Year of the Pig.

At its annual spring banquet, the Oakland Wong Association traditionally honors members who have attained 90 years of age.  This year, three are achieving that status, so were honored by that fraternal organization.  My husband, Calvin Wong, happens to be one of those who will reach that age later in the year and received commendations from its many members. 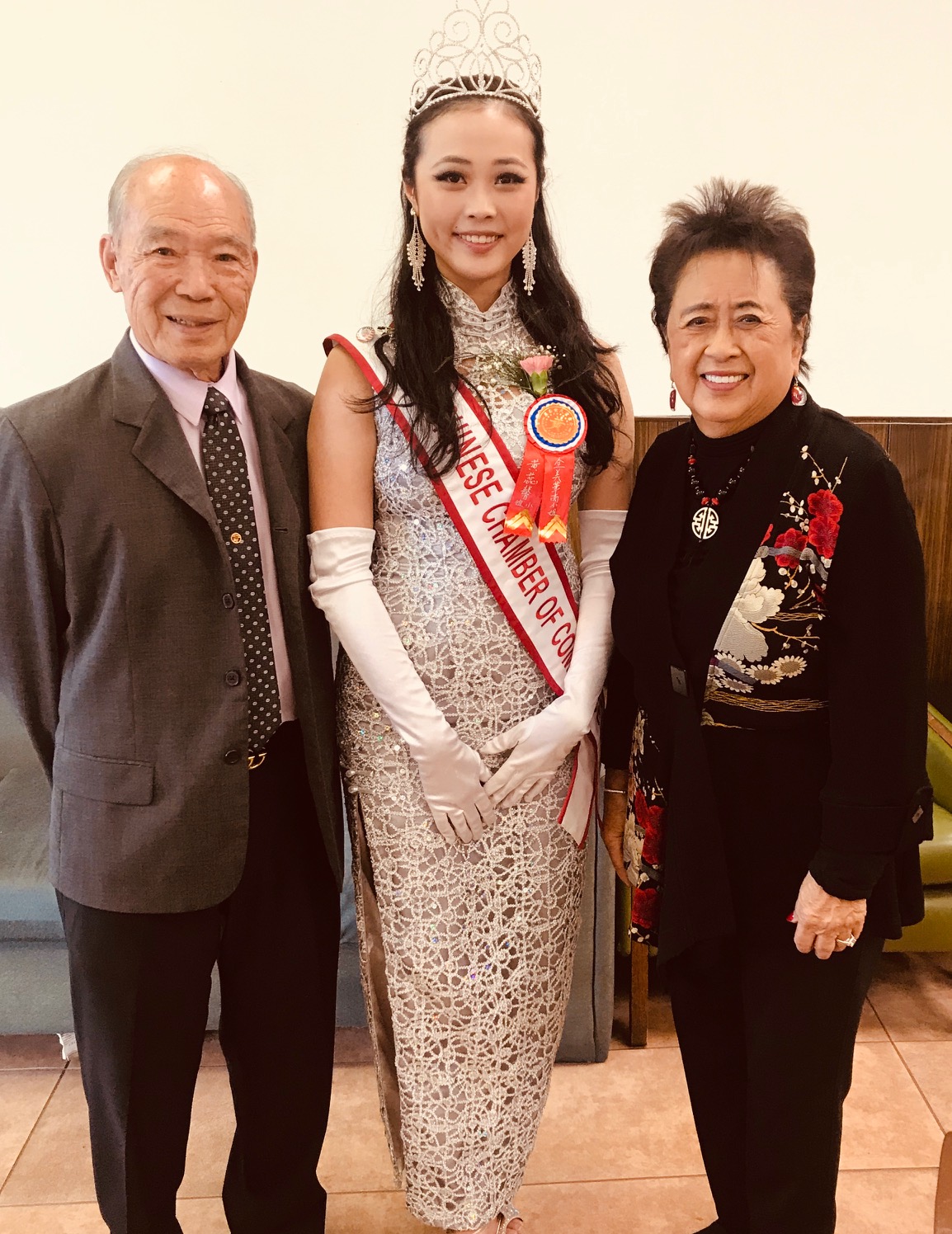 Calvin’s father, Gock Gim Wong, had been a loyal stalwart of the Wong Association of Oakland, serving as its president for many years.  To carry on the Wong involvement, he enrolled his sons as soon as they were born, and would be proud to look down from heaven and see his eldest being honored by the Wong Association of Oakland.  And what better way to make a man feel 90 years young is when they were met and congratulated by Oakland Chinatown’s Miss Chinatown contestant, who came down from Seattle’s Wong chapter. 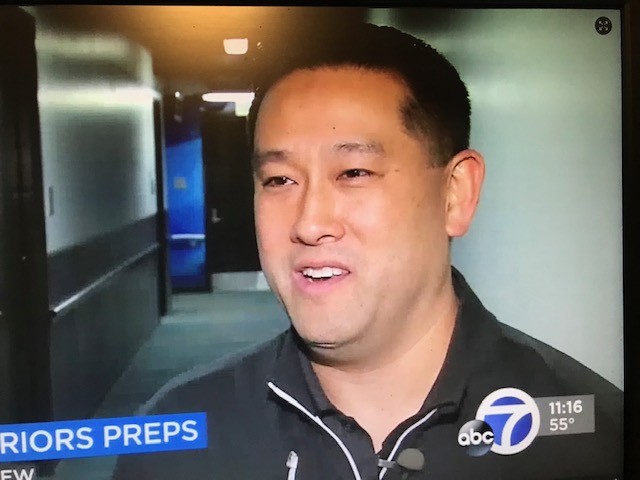 BRETT YAMAGUCHI is the guy behind-the-scenes at the Golden State Warriors basketball team games where glitz, glamour and fun activities are under his realm. If you’ve enjoyed seeing the Warrior Cheerleaders prance about, or the many activities shown during half time, its Brett and his team who plan all of these fun activities to entertain the audience during any game lulls.  For holidays, Brett brings in ethnic entertainment such as Chinese Lion dancers, or at other times, brings in youth performing and dancing routines for everyone’s pleasure. We enjoyed seeing some of the handicapped youth happily performing on court from the Friends of Children with Special Needs group.   So let’s HAIL TO BRETT YAMAGUCHI for always adding some fun entertainment elements to the games, whether it’s a good night or bad, basketball-wise. 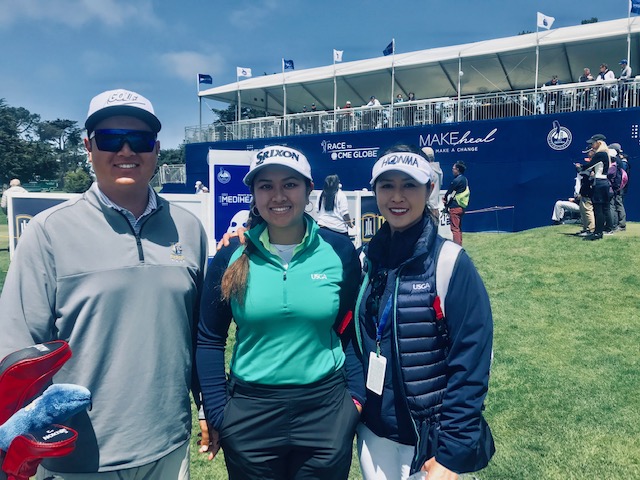 Lilia Vu with her mother and brother flew in from Fountain Valley to play at Lake Merced’s LPGA tournament.

LAKE MERCED was  the setting for the LPGA Tournament last week, where golf fans came out to watch some fabulous playing by a field of over 140 women golfers, who were cut down to half after the first day.  At the Players Dining Room,  Dali Jones and Maelene Wong, loyal women’s golf fans, could name the many young women contestants as they walked in the room. 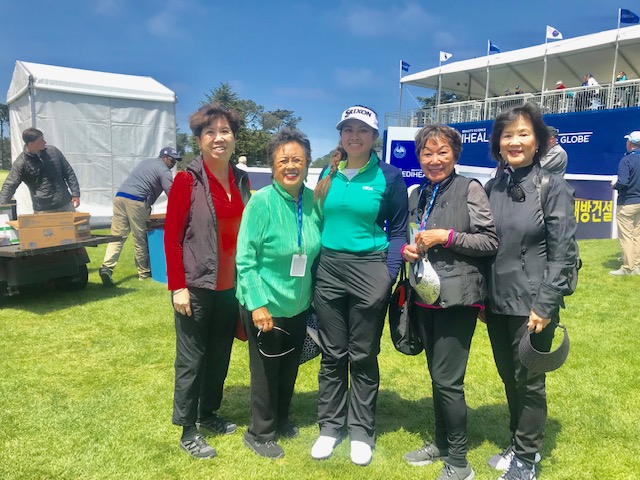 We had the chance to meet UCLA’s Rated Number one golf team member, Lilia Vu, her caddie brother and mother at lunch.  This was her first LPGA tourney which she found excitingly challenging for a first-timer at Lake Merced Golf Club. She is graduating soon and turned pro.  Fellow tournament watcher Mildred and I agreed it was fun to watch all of the young Asian competitors on the LPGA circuit now, and beating everyone too.

It was exciting day for me to be in Paris with son Mike and Dee Wong with their son Garrett, as he was running the Paris Marathon. We did not know that we would be witnesses to a part of history of the famed Notre Dame Cathedral. 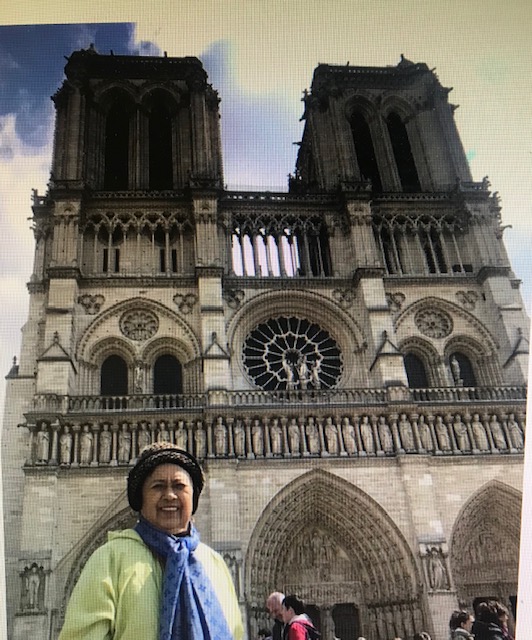 Gerrye in front of Notre Dame the day before the massive fire.

On our first day in town,  we decided to visit Notre Dame Cathedral and how fortunate we were to be able to sit inside, admire the stained glass windows, and enjoy the peaceful grandeur of the building. Little did we know then that by that evening, a massive fire would envelope the roof and destroy the spire above.  Below are photos Mike took of the morning before the fire, and  the day after so you can see the rooftop damage. 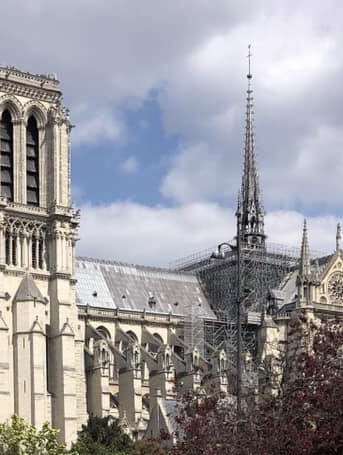 Notre Came the morning before the fire 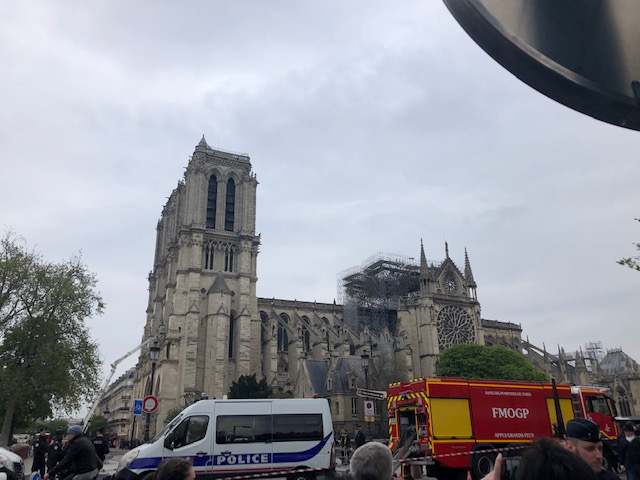