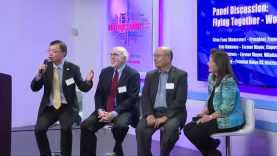 Should Work Together As A Team?

In a previous Civic Leadership Forum hosted by Silicon Valley Innovation Channel Ding Ding TV, former Milpitas Mayor Jose Esteves was featured in a panel discussion about how the next generation of leaders can work better as a team. This panel was moderated by the president of the Fremont Unified School District, Yang Shao.
Click on the image above to watch the full interview or post your comments online.

Jose Esteves has built a strong record of successes in Milpitas, making it a great place to live and to do business. During his tenure and under his leadership, numerous projects have been initiated to ensure city residents have an excellent quality of life–a new library, new market rate and affordable housing, new Senior housing, a county medical clinic, a revitalized Town Center, the relocation of several Fortune 500 companies into the City, and many others. His commitment to fiscal responsibility has resulted in a City in excellent financial condition, the financial strength to move forward with Downtown development, and a record of fighting against uncontrolled expenditures.
Jose Esteves served three terms as Mayor of Milpitas, California, a city with a population of over 70,000 people located in the heart of Silicon Valley. Milpitas’ diverse population (Caucasian, Vietnamese, Filipino, Indian, Hispanic, and many others) has provided Jose with a unique platform to listen to and understand the needs of many groups of citizens and residents.
As a member of the Milpitas City Council for almost 10 years, 6 of which was as Mayor, Jose Esteves has been able to accomplish many positive things for Milpitas and its residents:
Jose is campaigning again for Milpitas Mayor for this year’s midterm election to bring back his previous successes in Milpitas –fiscal responsibility, and maximizing City services.
source: http://www.smartvoter.org/2010/11/02/ca/scl/vote/esteves_j/bio.html
CLUSADDTVDiana DingDing Ding TVFuture LeadersJose Estevesmidterm electionMilpitasWork Together As A Team