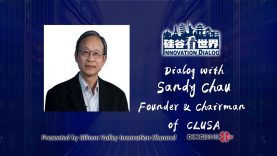 As Mr. Sandy Chau stated during his interview by Diana Ding of DingDing TV Asian-Americans need to become more visible by their active participation in Civic Leadership.

He spoke to a large audience of over 200 people, including three members of Congress (Ted Lieu, Judy Chau and Grace Meng) on Sept. 6, 2018 in Washington, D.C.

His desire is to “Ignite the Fire” by bringing leadership together to nourish, inspire and encourage each other.

He founded the Civic Leadership USA to encourage and train those interested in leadership by helping them learn how to participate in community service and the political process. Only through lively involvement can their voices be heard so that they are able to become visible and influence beliefs and legislation. These forums are being held all over the country.

Mr. Chau believes that Asian-Americans have been kept somewhat invisible due to stereotyping – being kept in a box – and that it is time to bravely step out of that box, get noticed and participate fully in the society in which they live.

Truth, he says is power!

He suggests:  Join associations, volunteer organizations, city council boards, education and health boards and serve the people..  By this involvement you will be able to adjust legislation, have opportunities to get elected to state and federal government positions, and in the not too distant future become President of the USA.

The White House is his ultimate goal for the members of his organization.

His motto: “Flying together we make the community strong.”

For other information about this organization, please visit www.CivicLeadershipUSA.org