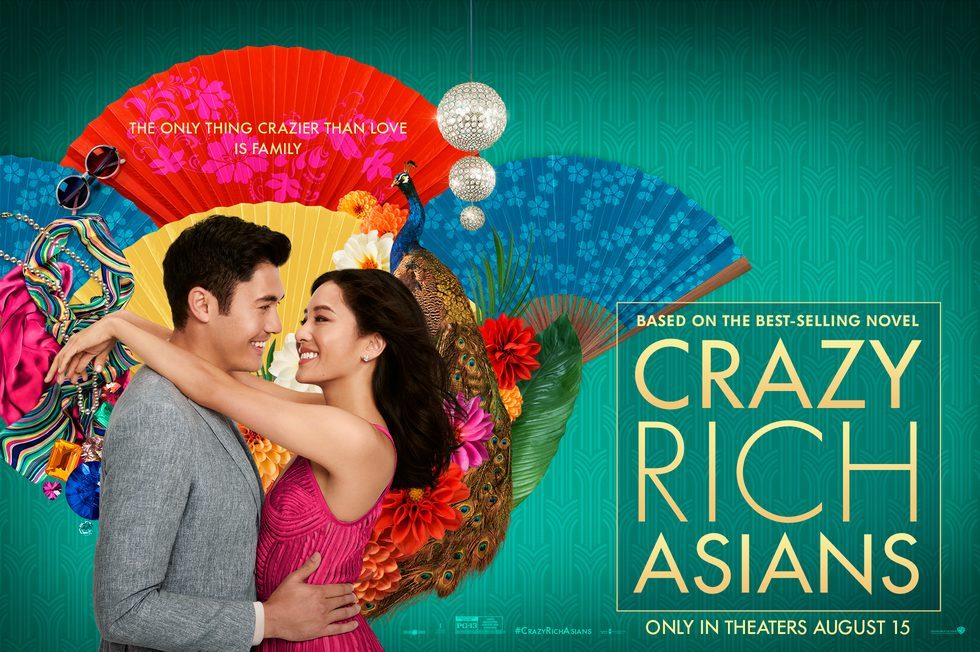 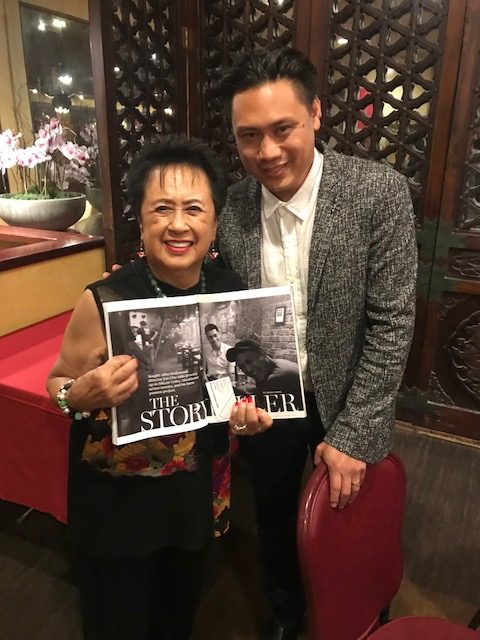 9/11 was a date in American history not easily forgotten for it was a date that New York was the site of a terrorist invasion that rocked our American sense of security.  It is easy to forget that we Americans are blessed to live in a glorious country reaped with history, some good, others we Asian Americans will not forget for the injustices heaved on our immigrant forefathers.  After a three month absence, today it is with pleasure I join the new updated modern website DingDingTV has developed for its readers and happy to be back.  Happy reading!

We finally have a movie with an all-Asian cast showing in the mainstream theaters throughout America, and it was so well received that this romantic comedy has been proclaimed #1 on Box Office sales for its first three weekend showings.  This shows CRAZY RICH ASIANS was not only a long-awaited-by-Asian-audiences film, but it has caught the enjoyment fancy of all American audiences. Congratulations to our own Silicon Valley hometown success story, Director JON CHU, for bringing out the first film with an all-Asian cast since JOY LUCK CLUB emerged 25 years ago. 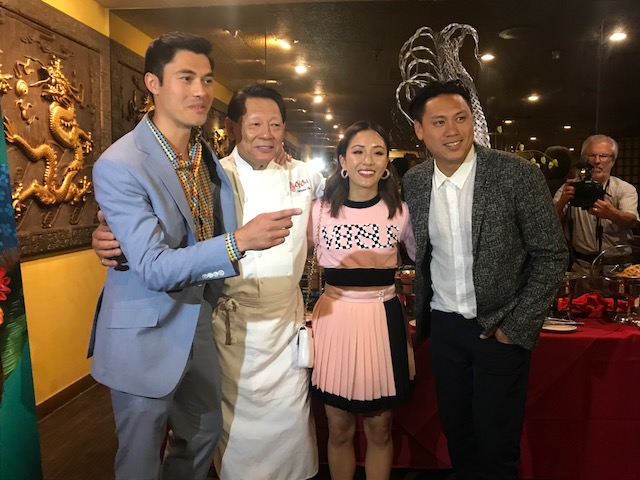 Weeks before the film opened, JON CHU and lead actors HENRY GOLDING (Nick Young) and CONSTANCE WU(Rachel Chu) came to Silicon Valley for a visit to tell a Facebook employees audience about the film, and its meaningfulness in regards to showing Hollywood that Asian actors should be given more starring roles in modern movies, and not just be seen as sinister villains from the far east.  Where else would they then meet local media to expound about their film, than at Jon’s father’s famed Los Altos Restaurant CHEF CHU’S.  Parents and owners Chef Lawrence and Ruth Chu welcomed Asian American media members and thE stars were soon whisked to corners by reporters Kristen Sze and Janelle Wang for interviews to be aired on their various television stations. 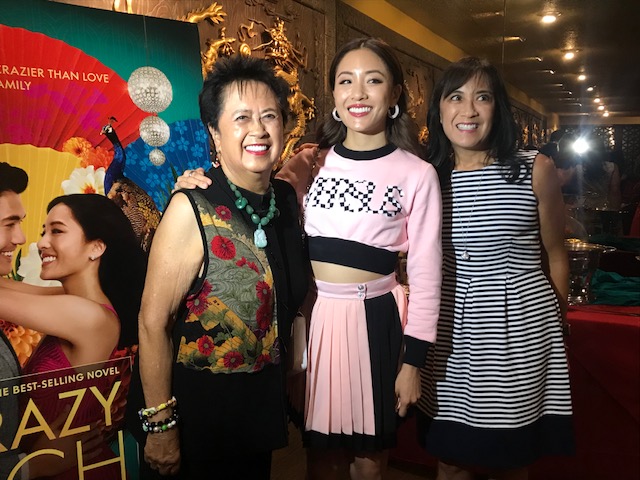 A very cute petite CONSTANCE WU, dressed charmingly in a waist-revealing pink short top and skirt, told us she was thrilled that Director Jon had postponed months to shoot the film as she had written him, expressing how she wanted to be in the film, but was hampered by TV commitment to her “Fresh Off the Boat” shooting schedule. Wisely he waited, and she put in a great performance as the young romantic lead. 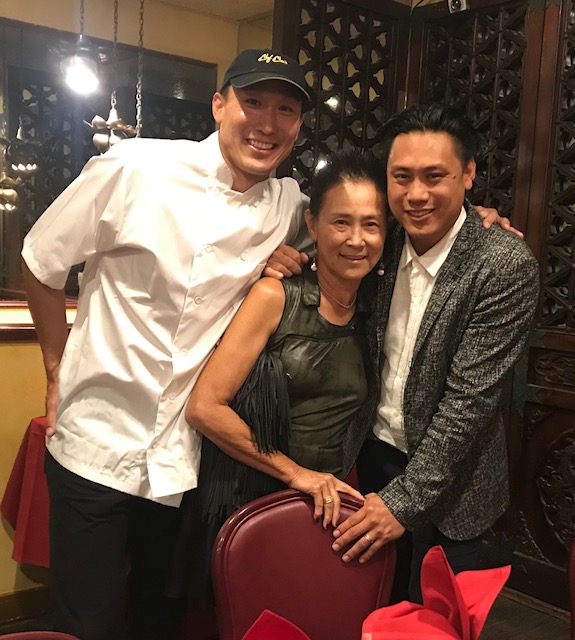 Mother RUTH CHU expressed pride of the film her son and author KEVIN KWAN fought to bring to the big theater screens instead of accepting a multi-million dollar offer by Netflix.  Obviously their decision was a wise one, for as of this writing, it is said that Crazy Rich Asians has brought in over 100 million dollars from its successful box office ratings.  Jon told the gathered media that although this is the fifth movie he has directed in Hollywood, this one will probably be the one he is most proud of, for it succeeds in showing American audiences that Asians can be seen and accepted in regular roles in mainstream movies so should be given more opportunities to be given more starring roles in American made movies. Ruth proudly showed off the awards son Jon had received for school movie projects when his talent was already evident over 15 years ago. 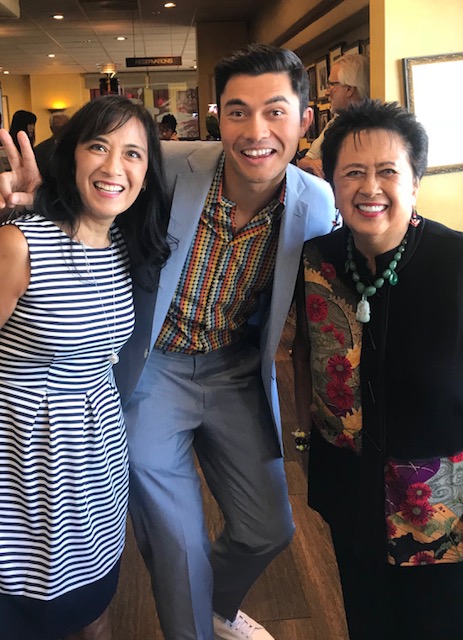 A very handsome HENRY GOLDING, a British/Malaysian TV personality, who had never acted in a full length film before, plays leading man Nick Young, son of the wealthiest Chinese family in Singapore, who studied in America, fell in love with a young Chinese American professor and brought her home to meet his unwelcoming family.  His friendly enthusiasm to meet Americans in his first visit to Silicon Valley won over everyone at the luncheon just as much as thousands of audience members have taken to him when seeing the movie.  It was reported you could hear comments such as “Wow, is he a good looking star!” from women in packed houses the first week of the film’s opening when theaters were sold out. He plays a very likeable and personable young man in love in the film, and carries the film well as the leading man fighting the war between his family and his so-called inappropriate choice for a wife. I found him charming, friendly and very fun-loving as he greeted us that day.  Run, don’t walk to see CRAZY RICH ASIANS at your local theater and see for yourself what an entertaining romantic comedy it is for everydayenjoyment.   This is the first time I’ve ever heard people brag about how many times they have returned to see the movie over and over – and admittedly, I myself have joined the throng and seen it multiple times too.

I am particularly proud of Jon Chu’s directing of this movie.  Fifteen years ago when he was a USC college student wanting to submit an entry for the  coveted Grace Kelly Movie Award, I was happy to support this young movie maker to give encouraging funding for his project , and yes, he won the coveted prize.  Three years ago, upon seeing he was making a name for himself in Hollywood, I wrote a feature story on Jon for Gentry Magazine.  Learning about his new project making an all-Asian film, I again was proud to write a story about this accomplished young man for Gentry.  So it was with much pride I was able to show him the article with visiting editor Stefanie Lingle Beasley that day.

Hear ye hear ye – This is a film we Asian Americans can all be proud of as the first All-Asian cast American movie in decades made for everyone to sit back and enjoy.  Many, I’ve heard, see it multiple times — and so did this reporter enjoy it three times around! 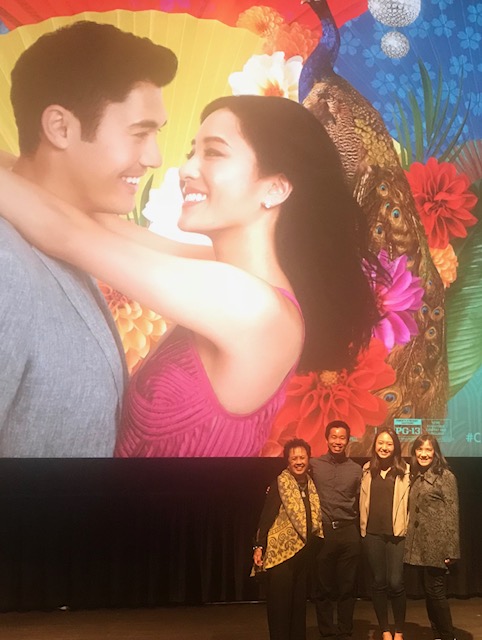 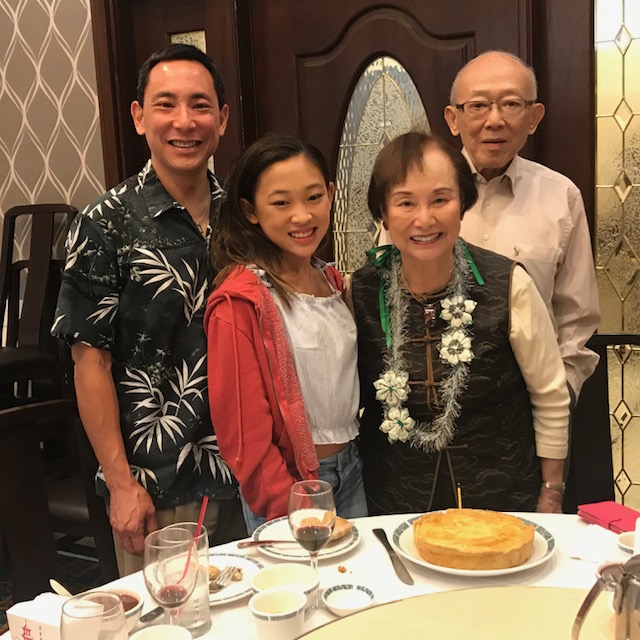 MABEL LAI celebrated her special birthday in grand style two times.  For her lady friends, she hosted a luncheon at Alexanders The Sea in Palo Alto where a special guest was a Elvis Presley impersonator in all his splendor, as invited by Flora Zee and Eva Jones to honor a very surprised Mabel. A Celebration dinner at the Milpitas Mayflower heralded other birthdays of her family too with son Tyson and granddaughter Paige Lai. 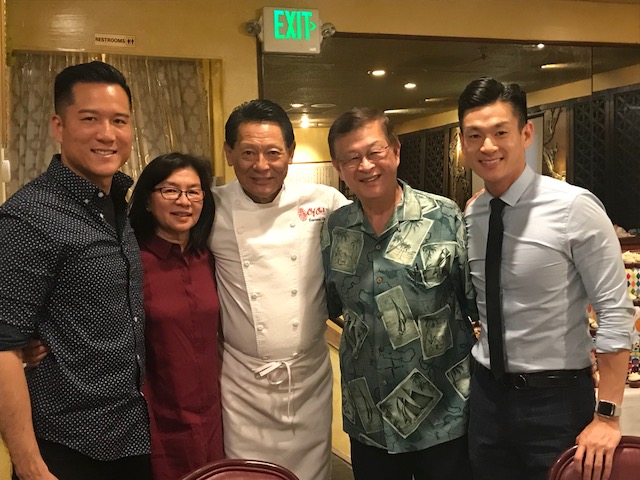 Surrounded by a roomful of friends and family at Los Altos’ Chef Chu’s Restaurant was DR. ARTHUR LOW to celebrate his momentous 70th birthday.  His sons David and Evan Low spoke of tales of growing with dad Art with loving remarks, followed by a slide show. Art played a game with his guests asking each table a question about himself to see how well they knew of his background and hobbies. Those guessing his favorite hobby, song or food won special prizes, all in good fun. 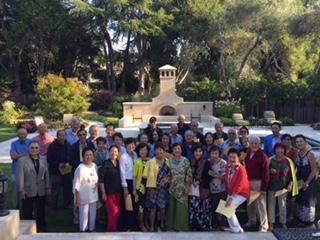 When son DR. PHILLIP LEE invited his mother Margaret’s friends to come to his Atherton home to herald her birthday, she graciously shared the happy occasion with fellow September birthday friends, Sherwin Louie, Dr. David Yee, Marina Ng, Calvin Wong, Drs. Clifford and Bobby Chang,  and Sandra Joe.  A moving Lotus candle burst out a high flame and opened up its petals containing multiple other candles to the delight of her many guests assembled in the spacious backyard under glorious California summer sunshine. Margaret and Ed Leedivide their time between their home in Honolulu and with sons Phil and Jeff and daughter in-law-Carline in California. 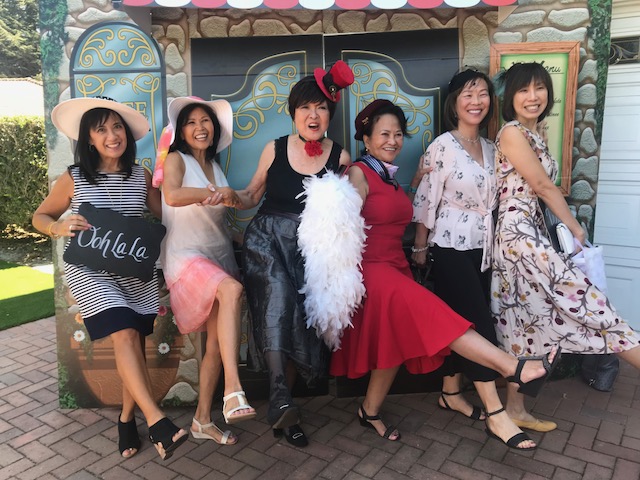 When daughters Karen and Kathy asked their mother, HELEN KWAN how she wanted to celebrate a big birthday, she said let’s have a tea for my many friends at my house.  That they did, and with a special French theme, they had granddaughters dressed up in colored costumes of navy and white stripe shirts topped with red berets serving the houseful of friends. Guests were instructed to wear their favorite hats and everyone came in finery suitable for the delectable 20 variety of pastries specially prepared by her daughters, granddaughters and herself. Helen’s family sang a rap song to her, and we all joined in a sing-along in Helen’s honor for this fun loving friend.

Photo 11 Caption:  The Why Family celebrated many birthdays in Cupertino. Seen here is Geoff, Annamarie, Mathias, Barbara, Bert and Theo Why. 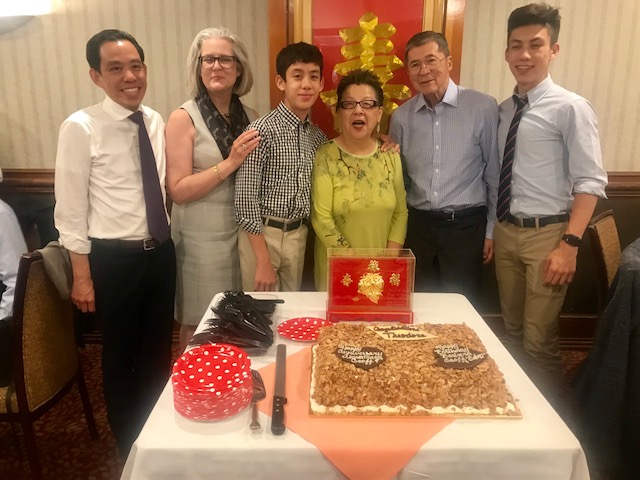 Happiness reigned into Cupertino’s Joy Luck Restaurant when visitors from near and far came in to celebrate occasions of many persons in the Bert Why Family.   Jeanne and Albert Wong flew in from Langley, B.C. Canada, their son Wayne and Karen Wong came from Reno, and their granddaughters Dr. Vanessa Wong and Serena Wong came from Los Angeles to celebrate together.   Besides everyone singing to Bert and Barbara’s for their 80th birthdays, the happy time was celebrating Geoff and Annamarie’s 25th wedding anniversary, and their son Theo’s high school graduation and send off to University of Chicago.  Congratulations to all. 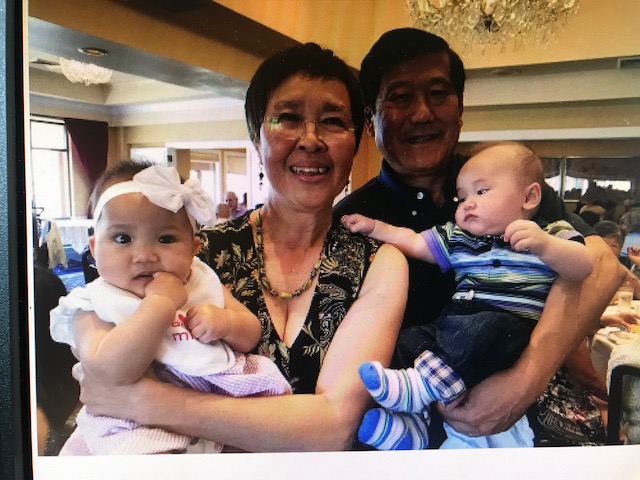 When two new grandchilden are born just a month apart, it was Chinese common sense to combine their Red Egg and Ginger Introduction party.  Newest granddaughter Maiya Woon-Chen traveled from Seattle with her parents Chris and Sabrina Woon to star at the party.  Not to be outdone was youngest grandson Cameron Bock-Woon who didn’t have to travel far from his Foster City home to the party at Millbrae’s Flower Lounge with parents Tiffany and Bradley Bock.  Happy grandfathers Seattle native Jack Chen and Steve Bock from Las Vegas joined the happy luncheon, while beaming happily was Great Grandmother Fay Wong.  Other travelers at the party coming from Pennsylvania were Uncle Jonathan and Julia Woon with the older granddaughters Kathryn, Zoe and Nora. Other cross country family members were Uncle Tommy and Thea Woon from Minneapolis, and cousin Edna Quan with son Max won the furthest traveler award coming from Shanghai, China.