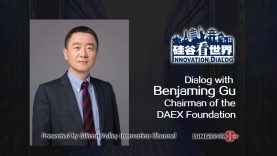 It’s also been published on the mainstream websites:

The latest interview on the show “Innovation Dialog,” hosted by Diana Ding on DingDing.TV features Benjamin Gu, and the issues around current cryptocurrency exchanges and the industry as a whole

DingDing TV is the first Chinese-American Internet television channel focused on connection and content for global entrepreneurs who are devoted to enhancing the understanding of viewers on various topics. The ultimate goal of this channel is to serve as a cultural bridge between China and the USA.

“During the interview, we cover a wide array of important questions surrounding the cryptocurrency market and exchanges today,” stated TV host Diana Ding. “Some of the things discussed include how to minimize risks with cryptocurrency, and how to adapt to the current challenges in the industry. We even breach more abstract topics, such as what Mr. Gu believes the future of blockchain (the technology behind cryptocurrency) is. All of this and more can be seen in our latest episode of “Innovation Dialog,” on DingDing TV.”

The DAEX Foundation, which is where Mr. Gu serves as the Chief Strategy Officer, is a clearing solution for the centralized cryptocurrency trading exchanges and is based on the distributed ledger technology. The process works by programming the clearing and settlement rules into the smart contracts on the DAEX clearing chain. Because the DAEX clearing solution is based on the distributed ledger technology, it guarantees all trades are conducted safely and correctly cleared and settled. Please visit http://daex.io/ to download the DAEX white paper and join the DAEX official community on Telegram: https://t.me/daxeofficialgroup.

“The interview provides insight on this industry, exposing some challenges and solutions that many may not have known about in the past,” continued Diana. “Our goal is to provide entrepreneurs in the US and China with the information they need to make informed decisions about various technologies that are trending today.”

More information about the latest episode of “Innovation Dialog,” as well as Mr. Gu’s company, DAEX, can be found on the DingDing TV website. Those who are interested can also view the source video on YouTube at https://www.youtube.com/watch?v=TnxMX1YFjLc&t=443s.

ABOUT INNOVATION DIALOG ON DINGDING TV

Innovation Dialog is a show that highlights cutting-edge solutions and the best initiatives from both China and the U.S. The main focus of the show is to help and bridge the gap between these two countries and promote the exchange of ideas. DingDing TV is the first Chinese-American Internet channel in the Silicon Valley. It is a platform and hub that helps to connect Chinese and US businesses while serving as a connection for all global entrepreneurs. The content seen on this channel is delivered to more than 200 million people around the globe.

DAEX is a distributed digital asset clearing ecosystem based on a decentralized clearing chain and distributed digital wallet. Through the establishment of a transparent and secure governance mechanism, a new clearing network for digital asset transactions will be set up in the future to address the key issues of credit, performance and security in the digital asset ecosystem and finally achieving a safe, credible and open ecology. Abandon the ultimate pursuit of the center of centralization, through the combination of distributed transaction platform and decentralized clearing and settlement system, we will achieve the everyone-witness of value Internet.